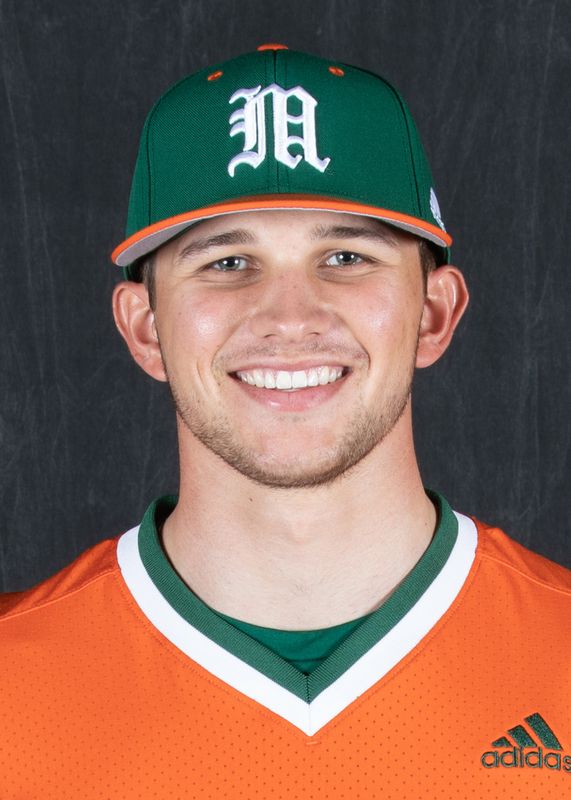 *Redshirt Sophomore (2021): Made 12 appearances, including five starts, as right-handed pitcher…Went 1-1 with a 5.40 ERA over 36.2 innings pitched…Struck out 34 batters while walking 11 and holding opponents to a .283 batting average…Made Miami debut tossing 2.1 innings in victory at preseason No. 1 Florida (Feb. 20)…Struck out one batter over 1.2 innings vs. Virginia Tech (Feb. 28)…Had one strikeout in a scoreless inning vs. FAU (Mar. 9)…Fanned two batters over four innings of relief vs. Florida State (Mar. 19)…Had four strikeouts over four innings, allowing one unearned run in win at FAU (Mar. 23)…Struck out four batters in first career start, allowing two runs (one earned) over 4.2 innings at Virginia (Mar. 28)…Had season-high seven strikeouts while allowing one run over five innings to earn first career win vs. Duke (Apr. 4)…Fanned four batters over 3.2 innings at Pitt (Apr. 11)…Struck out six batters while allowing just two runs over four innings in win over Clemson (Apr. 17)…Had one strikeout in one innings of relief vs. App State (May 8)…Fanned one batter in one inning against FAU (May 18).

High School: Injury sidelined him for much of his senior year as Jeff Davis went 32-8 including 13-1 in the region and captured the school’s first-ever Class AA state title…Saw action as a hitter at the end of the 2017 season, tallying 50 at-bats and hit .300 with seven doubles, 11 RBI, 11 walks and 13 runs scored…Posted a .440 slugging percentage and a .415 on-base percentage as a senior…Named 2017 Perfect Game Honorable Mention All-American for the Southeast Region…Posted a 2-0 mark and a 1.38 ERA in 25.1 innings pitched as a junior with 32 strikeouts and 13 walks plus hit .344 with seven home runs, 32 RBI and 22 runs scored in 93 at-bats…Two-way contributor throughout prep career as a pitcher/shortstop and earned second-team All-State honors as a junior by Georgia Dugout Preview magazine…Also lettered in football as starting quarterback for the Yellow Jackets.