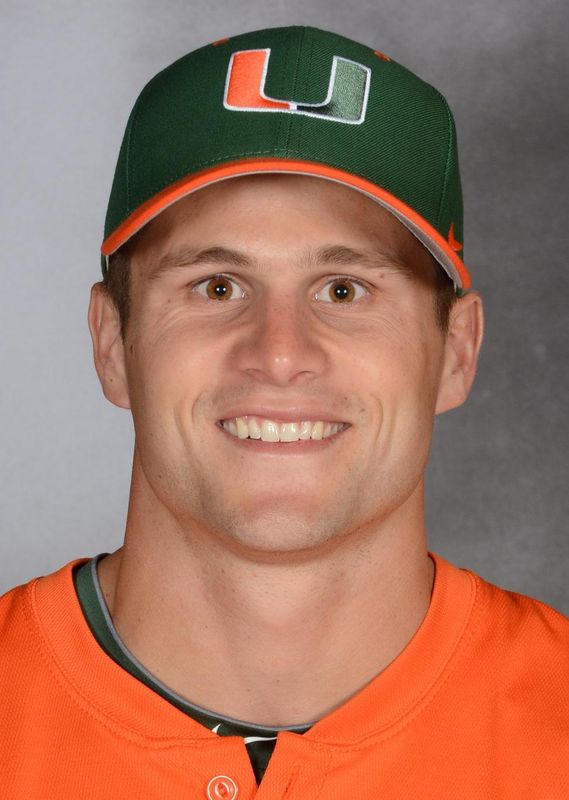 2013 (Redshirt Junior): Saw action in 16 games, including two starts…Served as one of team’s primary pinch-runners…Went perfect 4-for-4 on stolen base attempts….Scored career-first run in win over Columbia (March 20)…Made career-first start at Virginia (March 30)…Scored run against Georgia Tech (May 16).

Before Miami: Appeared in 31 games as a freshman at Birmingham Southern, starting at third base, as  designated hitter and in the outfield… Hit .350 with one home run and 21 RBI… Finished the season a perfect 8-for-8 in stolen base attempts… Two-sport athlete for the Panthers as he started at wide receiver on the Birmingham Southern football team…

High School/ Prep: Four-year starter and letterwinner at Trinity Catholic High School in Ocala, Fla. Coached by Tommy Bond… Named first team all-county three times and was a three-year member of the all-state team earning first team his senior year… Led team to four consecutive District Championships as well as a state final four appearance as a senior… In District final, had walk-off home run to complete the cycle… Team captain… Hit .483 his senior year while scoring 43 runs with 23 RBI and swiping 40 bases… Also played for the Orlando Scorpions under Coach Sal Lombardo… Also lettered in football, basketball all four years and track during his senior year… Selected to the FHSAA Academic All-State Team… Was the 2009 Florida Dairyman’s Boys’ Scholar-Athlete of Year in 2009, and was the WCJB-TV 20 Scholar-Athlete of the Week… Member of the National Honor Society and Spanish Honor Society…

Personal: Goes by “Johnny”…Son of Greg and Kim Lawroski… Born December 14, 1990… Has one sister, Carlin, who resides in Atlanta, Ga…Obtained his real estate license in August 2011…Majoring in Economics with a minor in Business Administration.