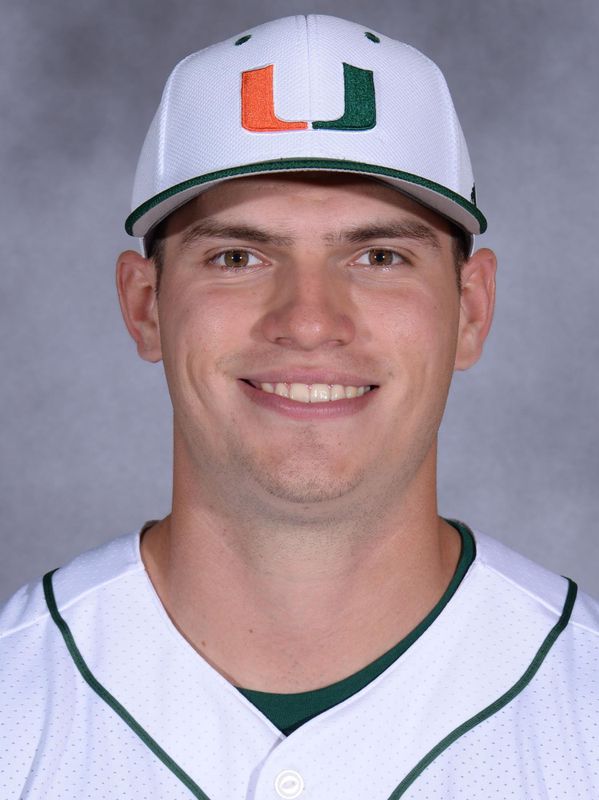 Junior (2018): Served as one of Miami’s top hitters despite missing half of season due to thumb injury…Led Hurricanes with .321 batting average and five home runs…Totaled nine doubles and 19 RBI…Earned one ACC Co-Player of the Week honor…Slugged team-best .547 and reached base at .345 clip…Ranked sixth with 10 multi-hit games and tied for fourth with five multi-RBI games…Ended season on 11-game hitting streak…Named ACC Co-Player of the Week on Feb. 19 after batting .727 (8-for-11) with four runs, four doubles and one home run in series with Rutgers (Feb. 16-18)…Had three straight multi-hit games in first series as Hurricane…Went 2-for-4 with one double against Florida (Feb. 23)…Tore ligament in thumb in finale against Gators (Feb. 25) and did not return until matchup at Clemson (April 13)…Had first hit (1-for-4) and first RBI after return from injury against FGCU (April 18)…Homered in back-to-back games against FIU (April 21) and FIU (April 25)…Collected five hits and scored three runs in team’s sweep of Bethune-Cookman (May 4-6)…Connected on fourth home run of year in Game 2 vs. Wildcats (May 5)…Had four straight multi-hit games from May 9-13…Went 2-for-3 with one run and one RBI against FGCU (May 9)…Totaled eight hits, four runs and five RBI in sweep at Virginia Tech (May 11-13)…Batted .533 in series at Hokies…Homered and went 1-for-3 with two RBI in regular season finale vs. Boston College (May 18)…Went 1-for-4 in ACC Championship opener against Notre Dame (May 22) in Durham, N.C….Finished season with 1-for-4 performance in ACC Championship matchup with Clemson (May 24).

High School/Prep: Selected in the 39th round by Boston Red Sox in 2015 MLB Draft…Ranked No. 38 nationally and No. 2 outfielder in state of Florida by Perfect Game…Helped lead Mater Academy to first state title in school history as junior…2014 Perfect Game All-American.

Personal: Intends to major in sports administration…Has one brother…Parents are Alberto and Elizabeth.