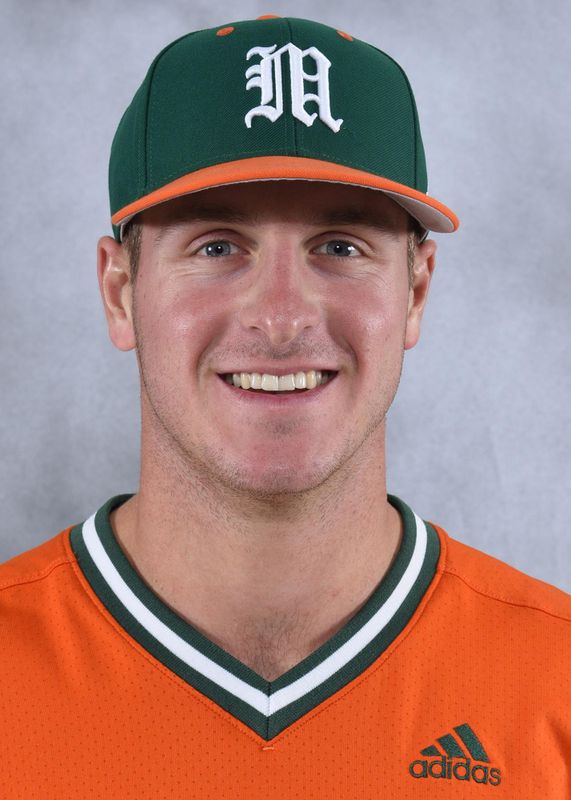 Senior (2020): Appeared in seven games as a reserve outfielder in shortened 2020 college baseball season…Had a double and a run scored in six at-bats…Doubled and scored in sweep-clinching win over Rutgers (Feb. 16)…Pinch hit and played the outfield in win over Kent State (Feb. 19)…Had a pinch hit appearance against No. 2 Florida (Feb. 22)…Came off the bench in win over Towson (Feb 29)…Was hit by a pitch at FAU (Mar. 4)…Walked in sweep-clinching win over Pitt (Mar. 8).

Junior (2019): Played in 41 games and made 15 starts in debut season with Miami…Hit .200 with a homer, seven RBI and 11 runs scored…Was 4-for-6 on stolen base attempts…Recorded first hit and RBI as a Hurricane on Opening Night against Rutgers (Feb. 15)…Had a hit and a stolen base against UMBC (Mar. 1)…Recorded a hit in first career start vs. UMBC (Mar. 2)…Walked, stole a base and scored a run in series finale vs. UMBC (Mar. 3)…Had a hit, an RBI and a stolen base against Jackson State (Mar. 13)…Had a single and a run scored vs. FAU (Apr. 3)…Posted a season-high two hits and scored a season-best two runs vs. FIU (Apr. 24)…Had a pinch-hit single vs. Virginia Tech (Apr. 28)…Drove in a run at Wake Forest (May 10)…Tied season-high with two hits and smacked a three-run homer for first home run as a Hurricane at Wake Forest (May 11)…Singled in series finale at Wake Forest (May 13)…Had a base hit in series opener vs. Duke (May 16)…Appeared in both ACC tournament games, walking vs. Virginia (May 23) and reaching base on a hit by pitch vs. North Carolina (May 24)…Made NCAA tournament debut vs. Central Michigan (May 31)…Notched first NCAA postseason hit vs. Southern (June 1)…Scored a run in elimination game vs. Central Michigan (June 2)…Had a pinch-hit appearance in Starkville Regional final vs. Mississippi State (June 2).

Personal: Parents are Rick and Michele Crosbie…has one brother, Justin… intends to major in sport administration.