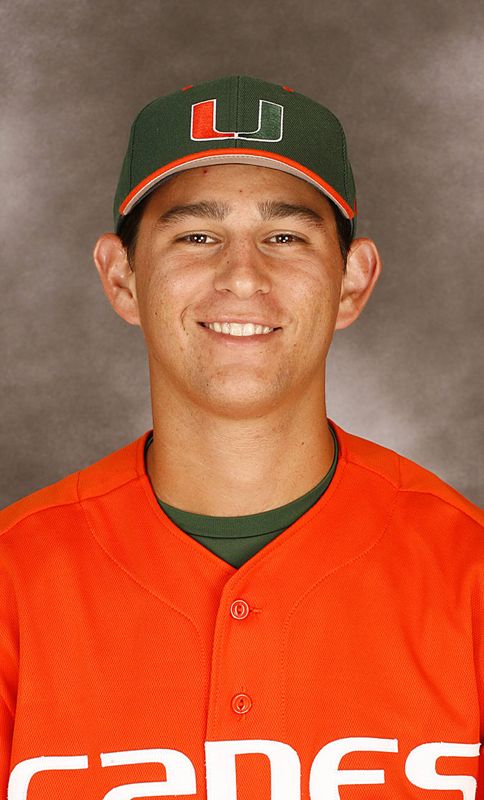 At Miami
Returns in 2008 after surgery and will be used immediately as the closer … anchored the the pitching staff as the Friday night starter for the first half of the 2006 season … has a rare combination of velocity and movement and has mastered three pitches.

Redshirted the 2007 season due to Tommy John surgery.

Pitched the last half of the season with an elbow injury that required Tommy John surgery following the season.Went 9-7 in 17 starts with a 4.40 ERA, totaling 88.0 innings pitched, 62 strikeouts and 33 walks and held opponents to a .245 average. vs. Wright State (5/6): Gave up just one hit in 5.0 innings to earn his ninth win of the season … Held the Raiders scoreless in the 14-1 win.at Florida State (4/14): Earned the win after going 6.0 innings and giving up two runs on five hits with four walks and three strikeouts … Held the Seminoles hitless until the fourth inning … all five hits were singles. at Duke (3/17): Threw seven shutout innings with seven strikeouts and two walks and gave up just four hits, all singles.vs. Indiana (3/3): Pitched the first six innings of a 4-0 shutout win in the series opener … gave up four hits with six strikeouts and a walk. vs. Bethune-Cookman (2/24): Set career highs with nine strikeouts in seven innings to pick up his fourth win of the season … gave up three earned runs on four hits with one walk. vs. Florida (2/17): Gave up just four singles – two infield singles – in 6.1 innings pitched, two runs, one earned.vs. FIU (1/28): Made his first career start in the series opener, picking up the win with five innings pitched allowing just one hit, a double and struck out three with two walks.

Made nine relief appearances, all in the first two months of the season … pitched a total of 10.0 innings and gave up nine earned runs and 11 hits, but also had 12 strikeouts. vs. Duke (3/11): Pitched an inning of scoreless, not-hit ball. vs. NC State (3/4, 5): Walked one batter in Miami’s inaugural ACC win on 3/4 … Gave up two earned runs on three hits in 1.2 innings the following day, with two strikeouts. vs. Northeastern (3/2): Struck out a four batters in two innings of relief. vs. High Point (2/4): Made his collegiate debut, striking out three batters and walking one while giving up two hits in two innings of work.

Played for head coach Joe Weber at Christopher Columbus High School … only began playing baseball prior to his senior season … played basketball up until his senior year. Senior (2004): Posted a 6-2 record with a 2.70 ERA during his senior season … struck out 42 and earned two saves … helped Columbus to a 25-6 record … district and conference champions.