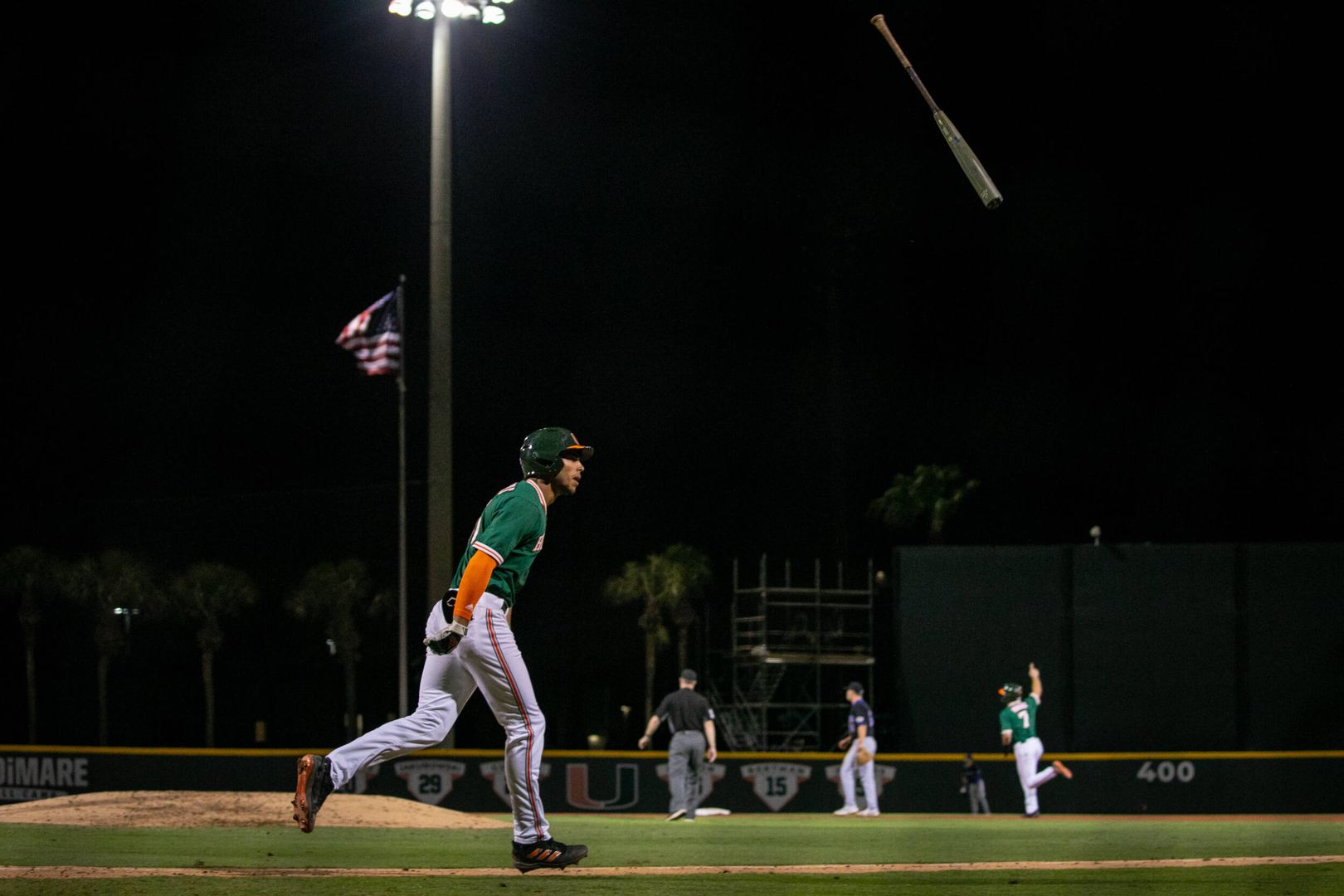 CORAL GABLES, Fla. — Miami shortstop Dominic Pitelli threw up The U in jubilation.

After sliding across the plate, Pitelli stood up and fired up the 3,482 fans at Alex Rodriguez Park at Mark Light Field.

The 22nd-ranked Hurricanes fed off of the sellout crowd Friday evening, toppling the 14th-ranked Florida Gators, 5-2, in the series opener.

“It’s an electric feeling. Our ballpark makes a lot of noise with people right on top of the field, so you feel it,” Miami head coach Gino DiMare said. “I can’t put a value on it but it benefits us a lot. It’s just so nice to have the crowd back.”

Sophomore infielder Yohandy Morales sparked the Hurricanes’ dugout with a two-run homer in the fourth. Morales flung his bat, admiring his 400-foot moonshot and celebrated with his teammates at home plate, sending the packed house into a frenzy.

One inning after Morales’ blast, Miami doubled its cushion.

Pitelli led off the fifth with a base hit before left fielder Gaby Gutierrez pushed him into scoring position with a sacrifice bunt.

With Pitelli in motion, first baseman CJ Kayfus followed with a check-swing tapper in front of the pitcher’s mound. The Hurricanes shortstop darted around third and dove headfirst into home.

“It’s a great baseball play that excites the crowd,” DiMare said. “It’s a play you don’t see very often. It gives us an insurance run and those runs are huge.” 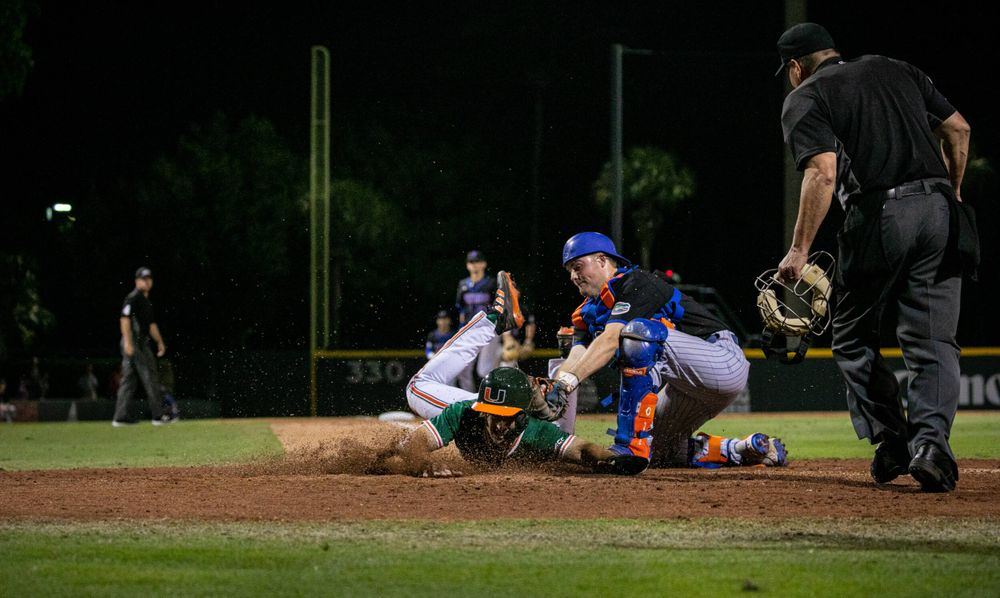 After Jacob Burke’s two-out single, Morales drilled a double down the left field, scoring Burke from first and putting the Hurricanes up, 4-0.

The Gators scored a pair of runs in the seventh off of Miami’s bullpen, forcing DiMare to turn to closer Andrew Walters.

With the tying runs in scoring position, Walters struck out Florida shortstop Josh Rivera to end the threat.

Miami answered with an insurance tally in the bottom half, but Walters mowed down the Gators the rest of the way.

The hard-throwing right-hander recorded the final seven outs for his third career save.

“It was a high-pressure situation and I was looking to challenge the guy and get the job done,” Walters said. “It’s a ranked matchup and a rivalry game, a sold-out crowd, I was hyped up.”

Two of the most highly-touted left-handers in the country duked it out across the first five innings before the Hurricanes got to Florida’s Hunter Barco (2-1) in the fourth. 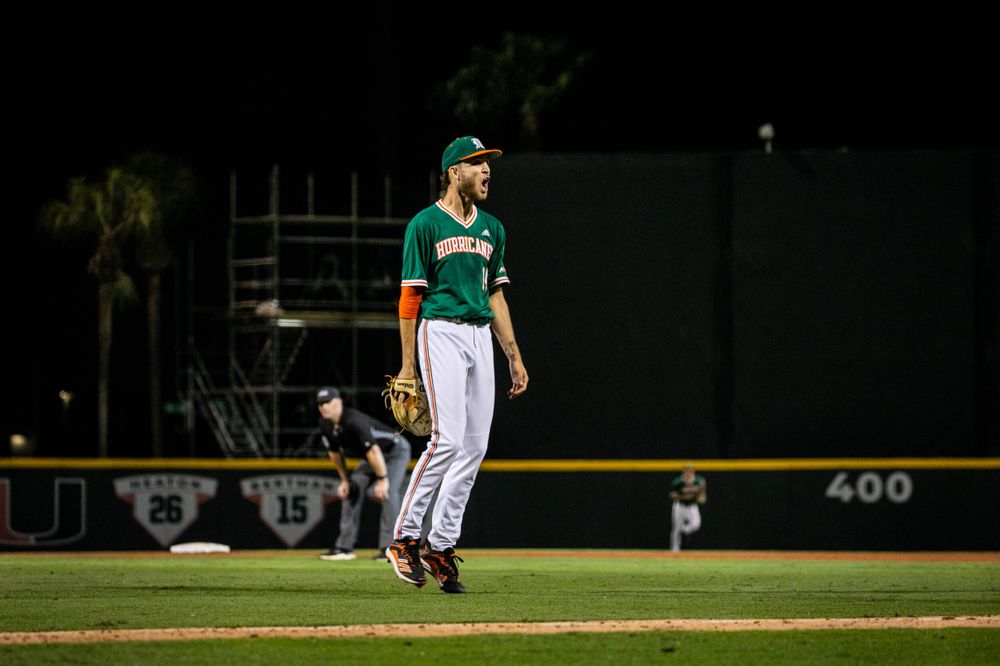 “The energy from the crowd got everyone fired up, and really fired me up,” Palmquist said.

With the win, Miami took the opening game of a home series against the Gators for the first time since 2014.

The two rivals will square off again Saturday evening at Mark Light Field. First pitch is slated for 6 p.m.