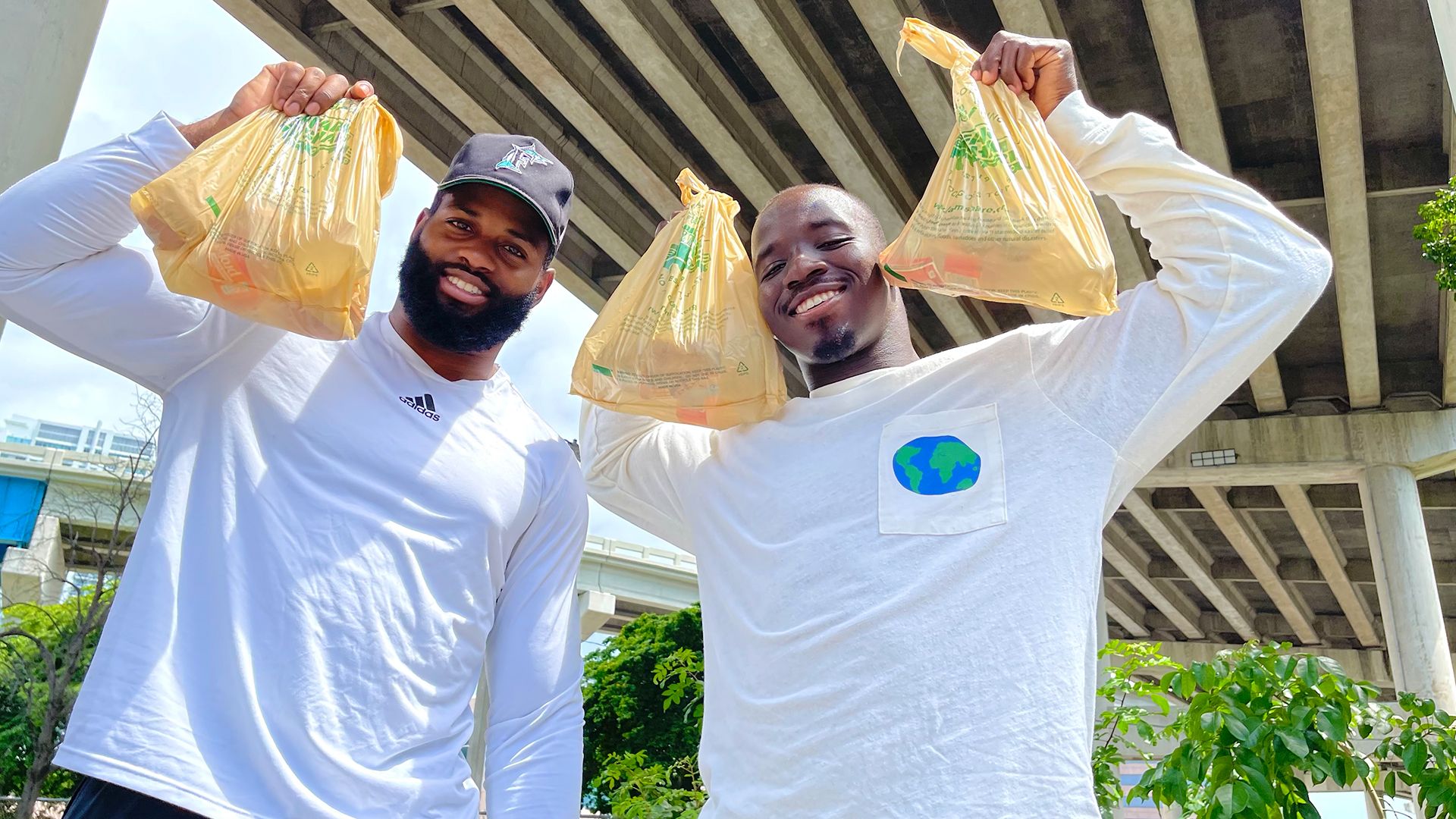 CORAL GABLES, Fla. – It was an idea that started simply enough over lunch.

Amari Carter was in Orlando visiting his girlfriend, Emilee Shea, when the conversation wandered to how fortunate the two were that they were able to share a bit of time and a bite to eat between their studies, his football responsibilities and her training to become a nurse.

Carter noted how blessed they were – and how much it stung that others couldn’t enjoy the simple luxury of a meal prepared and served by others. So he and Shea began brainstorming.

How could they serve some of those in need in that moment? What if, when they were finished eating, they put together bags of food and water, drove downtown and delivered them to some of the people they encountered?

The pair didn’t know it then, but on that summer afternoon, a fledgling charity was born.

“After we ate, we went straight to the grocery store and bought groceries. We made peanut butter and jelly sandwiches, added bananas, apples, grapes and bottled water to the bags and wrote notes that said things like ‘You’re loved’ or ‘God loves you. Just a message we could add with the food,” Carter said. “And we went to downtown Orlando and fed probably between 25 and 30 people. Right then and there, us being out there and the conversations we had, the smiles we saw on people’s faces, we knew it was something we wanted to continue doing.”

Their resolve was only strengthened in late June after Carter and several of his Hurricanes teammates delivered meals to first responders working at the site of the Surfside condo collapse. There, once again, the safety saw the power of food on a heavy heart.

So Carter and Shea began making more trips to the grocery store, preparing meal and snack bags and delivering them downtown and in Miami’s Overtown neighborhood.

It wasn’t anything either of them formally organized, though some of Carter’s teammates – including defensive end Zach McCloud and safety Keontra Smith – joined them on a couple of their early trips downtown.

But the more meals he delivered, the more Carter felt the need to try and grow his efforts. He shared pictures from a few of his deliveries on social media and a growing number of his followers on Instagram asked how they could get involved and help, too.

So Carter sought guidance from Mike Blanc, the Hurricanes’ team chaplain, and Shirelle Jackson, Miami’s Senior Associate Athletic Director for Student-Athlete Development. He got advice, too, from some of the members of the Board of Directors of Miami’s chapter of the Fellowship of Christian Athletes, a group Carter has been involved with during his time at UM.

It didn’t take long for the safety to realize that a bit more organization and creating a foundation with official recognition as a 501(c)3 charity would help him in his mission.

“Right now, we’re kind of focusing on feeding people. We’re planning a toy drive. But that isn’t the complete end game,” Carter said of his organization, which he has since named the Survive Foundation. “In the future, I want to keep building this. Wherever God takes the foundation, that’s where He’ll take it. If we’re going to make it, why not try to shoot for the stars? It could be next year or ten years from now; it could be 20. I have big plans for it and hopefully, it can be something that people in different places can get involved with, too. Maybe they can start [chapters] in some places that aren’t here.”

That Carter has chosen to dedicate some of his time to helping others isn’t a surprise to some of those who know him best.

In 2019, Carter was one of seven Miami football players and three volleyball players who traveled to the Dominican Republic for a mission trip during spring break. There, the Hurricanes provided meals to families in need, delivered solar-powered lamps to families living in an area with no electricity, painted homes and spent time with orphaned boys living in a local group home.

And this week, Carter was among the Hurricanes who visited a local grocery store and helped put together Thanksgiving dinners for 10 local foster families.

“Amari is uncommon. You don’t get to coach many like Amari. He’s an old soul, mature, always has been and you talk about somebody that thinks about others before himself…He’s just a joy to be around,” Miami head coach Manny Diaz said. “This senior class, what they’ve done for this program, it doesn’t get put on a banner, but it may be more important because people like Amari Carter set your culture. And I think they inspire the younger players to understand what their time at Miami is about and it’s not just about you. It’s about what you can do for others.”

“Amari is uncommon...you talk about somebody that thinks about others before himself...he's just a joy to be around."

For his part, Carter is determined to continue helping his community.

As he thinks beyond where his football career may eventually take him, he is eager to continue the work of building his foundation. He wants to see it grow, see more of his teammates and other young people get involved and wants to continue to be an inspiration off the field.

“What I want it to become is something that grows throughout South Florida, just an organization that puts others first, an organization that is known for caring and trying to supply the less fortunate with things that they need,” Carter said. “I really just want it to be a light in communities, whatever that light may be. Right now, it’s feeding people. But if it grows to something else, something more, then I’ll welcome that. I want to be able to one day go out of the country and paint houses or help people with clothing; bring clean food to them, clean water to them. However way, shape or form we can help people…that’s what I want to do.”