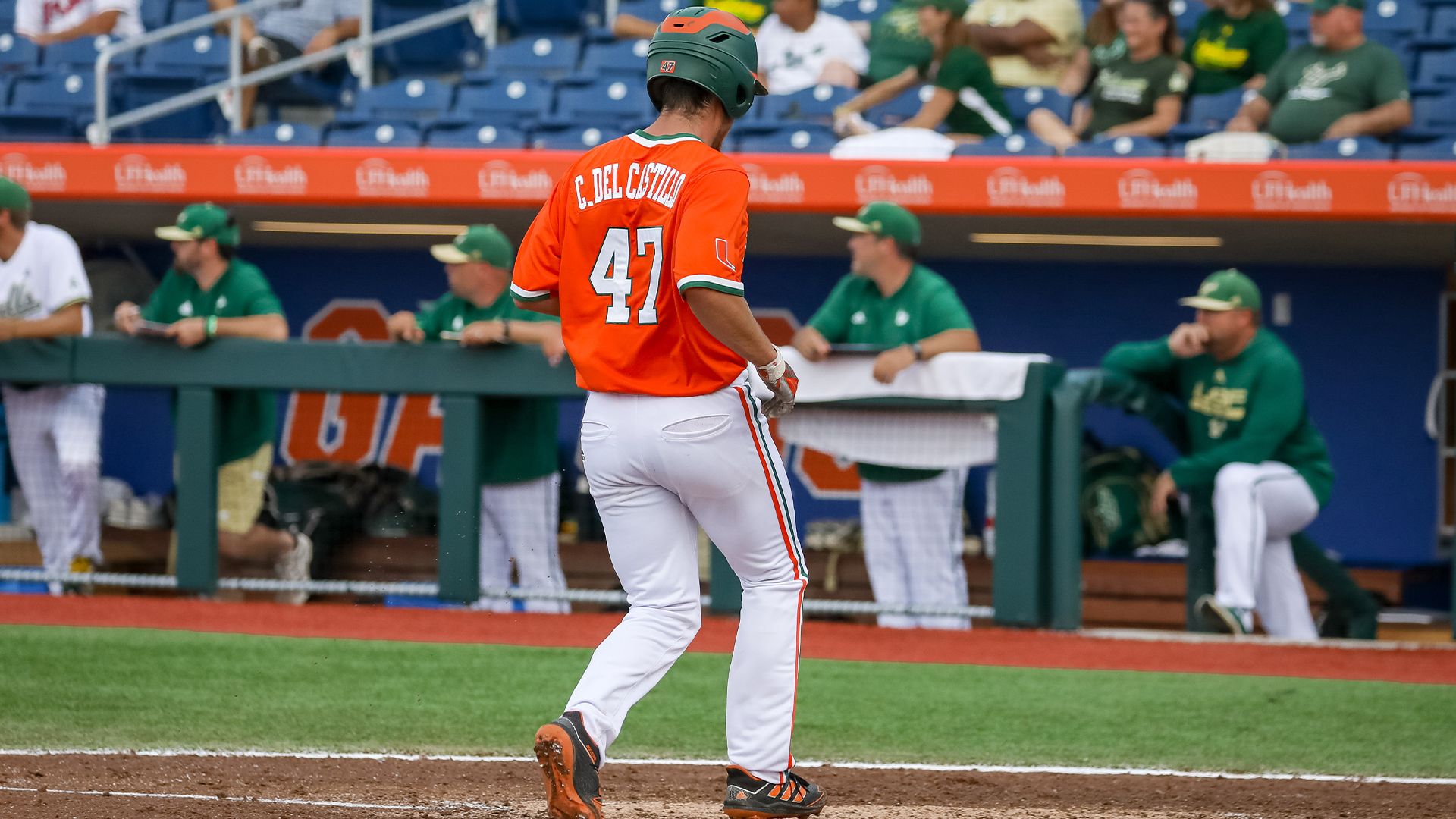 The Canes (33-20) could not overcome USF’s five-run fourth and the Bulls (30-27) added on to advance to the Gainesville Regional final with Saturday’s victory.

“Tough game. It’s not the route we wanted to take, but it is what it is and we’re in this situation now,” head coach Gino DiMare said. “It’s going to be a quick turnaround. We got to be ready to go tomorrow.”

Miami starter Jake Smith had some trouble with command early, issuing a pair of walks to load the bases in the bottom of the first before Bulls’ catcher Jake Sullivan drove in Riley Hogan with a sacrifice fly to right.

“Jake wasn’t sharp, there’s no doubt about it,” DiMare said. “We have to start thinking long-term here now. We’ve got three games and we better make sure we have enough pitching to get through this thing. But, we can’t get through it if we don’t take care of business tomorrow.”

The Hurricanes answered in the next half inning, as Tony Jenkins delivered a two-out single to right that drove home Christian Del Castillo to square the score at one apiece.

USF mounted a rally against Smith in the fourth, getting the first two hitters on before Nelson Rivera’s one-out single to center put the Bulls back ahead, 2-1. Nick Gonzalez followed with an RBI single to right that doubled the lead to two runs and ended Smith’s outing.

Right-hander Andrew Walters took over on the mound as the skies opened and heavy rain began to fall. The freshman walked Carmine Lane to load the bases and got Riley Hogan to hit a fly ball to center, but Jenkins could not see it in the deluge and the ball landed in the grass and drove in two runs to make it 5-1.

Umpires finally called for the tarp with two on, one out and a 2-2 count to Roberto Peña. Following an hour and 22-minute delay, right-hander Alex McFarlane took the mound and fanned Peña on a slider. But the freshman threw a wild pitch that allowed Lane to score and make it 6-1 and cap a five-run fourth for USF.

The Bulls added on in the fifth, as Rivera picked up his second RBI of the game with a shallow fly to right that pushed home Matt Ruiz. USF scored a second run in the inning when Jarrett Eaton, who reached on a fielder’s choice, scored while the Hurricanes turned a double play to make it 8-1.

Miami got a run back in the top of the seventh, loading the bases against lefty reliever Logan Lyle before Yohandy Morales pushed home Jenkins with a sacrifice fly to deep center. But USF responded with a run in the bottom half of the inning when Rivera doubled to the right field corner and drove in Ruiz, picking up his third RBI of the night.

“We’ve got to win three games, but we’ve got to win one game three times, that’s the way we need to look at it,” DiMare said. “We’ve put ourselves in this hole, but we can come out of it. We have enough pitching to do it. We just got to play cleaner baseball, bottom line.”

The Canes will face South Alabama on Sunday in an elimination game. First pitch is set for noon.