If you ever see Mark Drobiarz at the airport, where he’s always decked out in Miami Hurricanes gear from head to toe, make no mistake about it: he’s not going on vacation.

He’s on his way to watch the Hurricanes play – it’s just a matter of which sport he’s going to support.

“I don’t fly to Europe. I don’t take two-week cruises. I don’t have a boat. I go to University of Miami sporting events. They’re very important to me,” Drobiarz said.

If it’s fall, he’s headed to a football game. In the winter? Either men’s basketball or women’s basketball, depending on the weekend. And if he’s at the airport come springtime, it’s about the chance to watch his first love – Miami Hurricanes Baseball – on the road.

“When I found out about the baseball stadium in the late 1970s, there was a little table that offered the chance to become a baseball booster for $25,” Drobiarz said. “It all started with baseball.”

He now has season tickets to every ticketed sport at Miami. Drobiarz also attends track & field meets, soccer and volleyball matches, and supports both tennis programs at the Neil Schiff Tennis Center.

Drobiarz, who relocated from Pennsylvania to North Miami in the summer of 1976, didn’t know what the University of Miami was when he arrived and started working in the bar industry. Making a delivery to the law school for a ceremony one afternoon, he received his tip in the form of a lunch voucher redeemeable at the student union.

The rest is history.

“That’s how I discovered the University of Miami,” Drobiarz said. “I then went to my first football game to watch the Hurricanes play Penn State in 1977.”

Drobiarz, who grew up rooting for the Nittany Lions up until that point, quickly traded allegiances after his first trip to the Orange Bowl. Miami lost the game – they got walloped, in fact, 49-7 – but Drobiarz was overcome with emotion.

Drobiarz has now been involved with Miami Athletics for more than 40 years. He has been a Hurricane Club member, serves on the board of the University of Miami Sports Hall of Fame, works with alumni programs on almost every athletics-related event, and is at nearly every away football game.

“I really do bleed orange and green,” Drobiarz said. “Even though I’m not a graduate of the University of Miami, it’s the biggest part of my life. I made that choice 45 years ago. It became a priority for me, and I have no regrets. I haved loved every minute of it.”

Though he’s at almost every Hurricanes home game, and has been for nearly 50 years, there was one Richard Zinn remembers was just not in the cards.

“I was about 11 years ago,” Zinn. “It was pouring. There was no way we could go. I listened to the game on the radio, Sonny Hirsch was calling the game. I’m glad they won without us!”

The win over the Spartans was the exception for Zinn and his father, who made a tradition of Friday nights in the Orange Bowl.

“We’d have a quick dinner and would drive to the stadium when there was no expressway. We grew up on Miami Beach and would take the Venetian Causeway over,” Zinn said. “We sat in Section U, Row 35…a whole group of people who were friends of my parents. We all knew each other back then.”

Zinn has fond memories of traveling to Gainesville with his father to watch the Hurricanes play the Gators, including a win where George Mira threw a touchdown lefthanded to win the game.

A University of Miami law school alum, Zinn has passed along his love for the Hurricanes to his children – daughter, Caryn, and son, Warren. He began taking his children to the Orange Bowl when they were just toddlers, sparking a lifelong love for The U.

And though they’re both Michigan alumni, both of Zinn’s kids root for the Hurricanes on Saturdays in the fall. Now they’ve got children of their own – another generation of Miami fans in the making.

“I now have nine tickets – four in the back and five in the front across two rows,” Zinn said. “It’s special.” 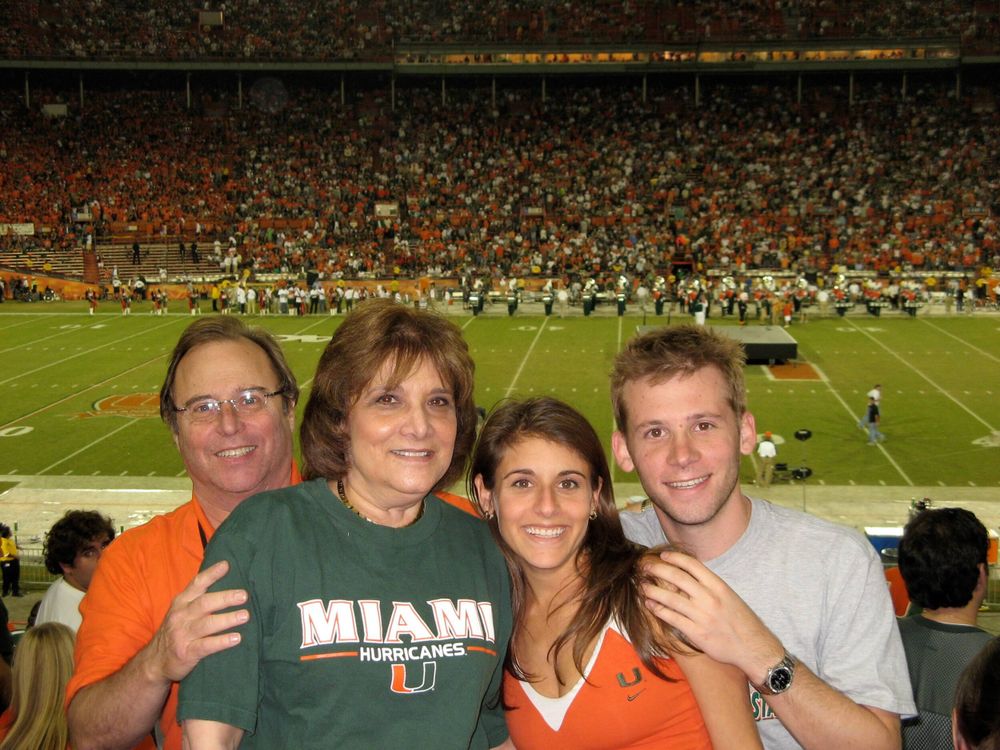