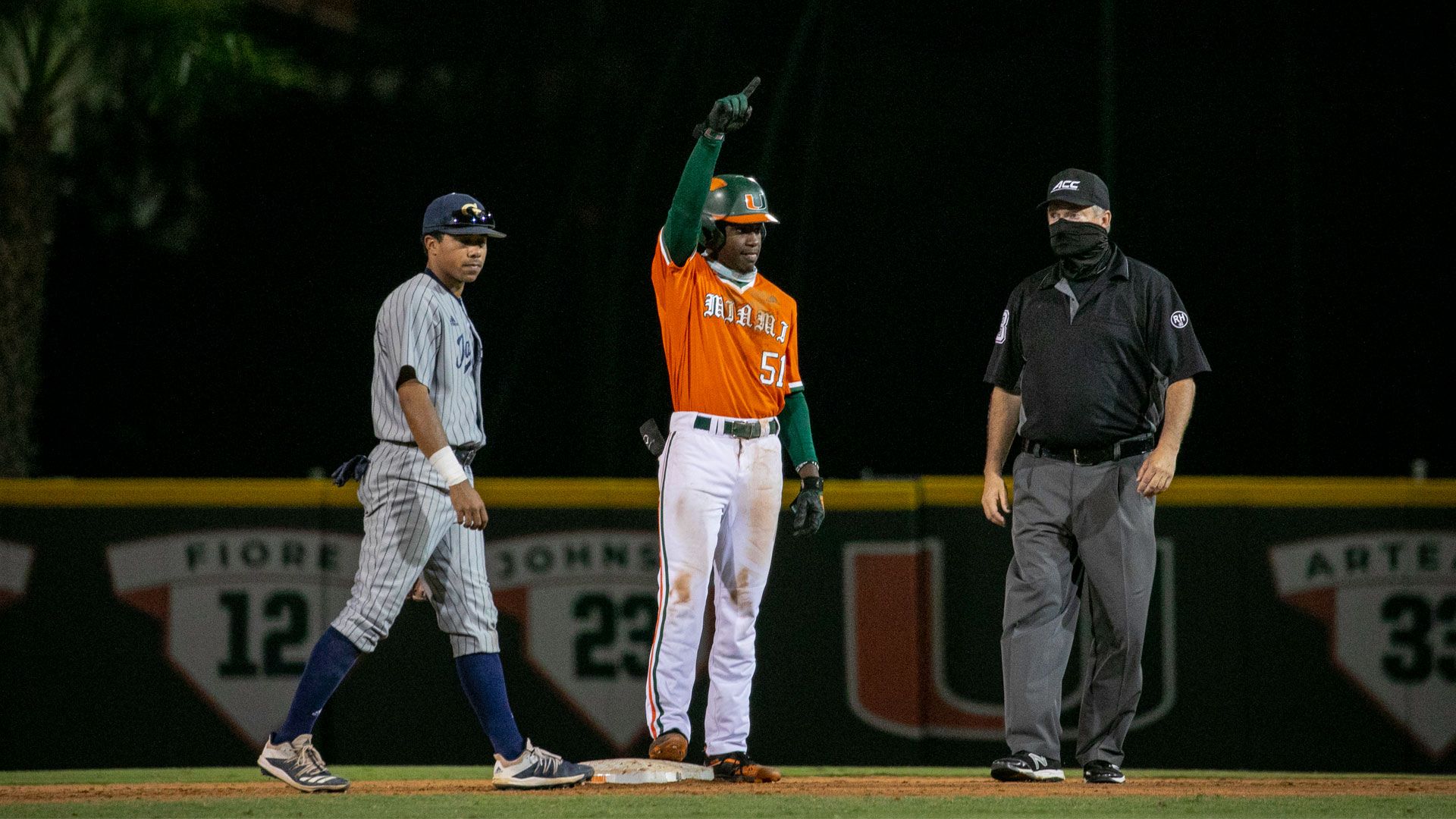 Canes Even Series With Georgia Tech

Jenkins, who was the Miami Hurricanes’ starting centerfielder opening night, had to adjust to a different role after some early season struggles in his fourth campaign in the orange and green.

But Jenkins kept working on his craft and refining his game. And when head coach Gino DiMare called on the Rockledge, Fla. native, he delivered.

On senior night, Jenkins led Miami’s offensive charge as the Hurricanes buzzed past the Yellow Jackets, 10-3, before a sold-out crowd of 641 fans inside Alex Rodriguez Park at Mark Light Field.

“It says a lot about him,” DiMare said. “He’s a guy that hasn’t complained. He hasn’t moped. He’s a four-year guy that hasn’t played a whole lot this year. He’s waited his time and he’s gotten an opportunity, and I love that he’s taken full advantage of it. I’m happy for him.”

Jenkins tied his season-high with three hits and three RBI. He tallied the game-winning base knock with an RBI single in the fourth inning and added a two-run double in the seventh.

“I just can’t believe how quickly these four years have flown by,” Jenkins said. “I’m just grateful and I’m blessed. Just being out here with these guys every day, it just means the world to me. I’m very, very thankful.”

The Hurricanes jumped on the board with three runs in the third frame.

With runners on the corners, captain Adrian Del Castillo roped his team-leading 13th double into the right-field corner, putting the Hurricanes up, 2-0.

“Hitting is super contagious,” Del Castillo said. “Our dugout was going crazy, which is obviously a really good sign. We picked it up from there so that was huge.”

After Del Castillo advanced to third, Yohandy Morales grounded a single up the middle, plating the Hurricanes’ catcher and closed out the scoring in the inning.

The Canes stayed hot in the fourth, tacking on two more runs.

Jenkins laced a single through the right side, extending Miami’s lead to 4-0. Jenkins’ base knock chased Yellow Jackets’ starting pitcher Andy Archer (4-5) after only three innings.

UM answered and put the game out of reach with a four-run seventh inning.

“We had some big hits, some clutch hits, some hits with two outs,” DiMare said. “It’s good to see when you have the entire lineup being productive.”

Federman, Spencer Bodanza and Carson Palmquist combined for four innings of one-run baseball out of the bullpen.

“It starts on the mound,” DiMare said. “Great job from Jake giving us five solid innings against a very good offensive team. I thought our bullpen threw excellently.”

“It’s big tonight, special night,” DiMare said. “For all of them, they’ll remember this for the rest of their lives. But it’ll mean a lot more if we can win the series because we’re fighting right now. We’re fighting for some extension to the season. Tomorrow is a big game and it’ll mean a lot if we can come out with a series win.”

Miami and Georgia Tech square off in a rubber game Sunday at Mark Light Field. First pitch is set for 1 p.m.