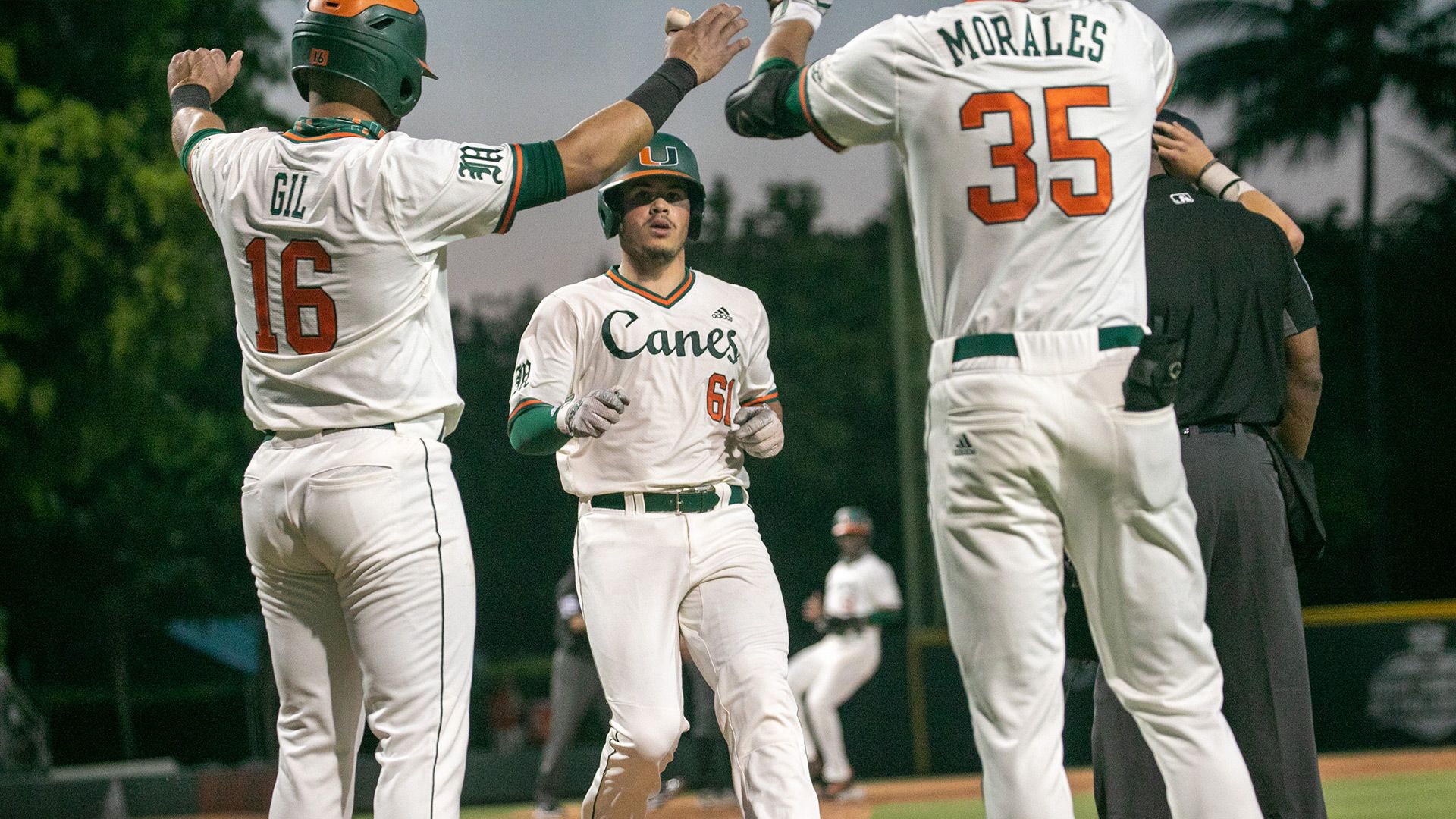 The Canes (26-15) exploded for 10 runs in the bottom of the second and added three homers later in the game to crush the Mountaineers, 16-1, before a sold-out crowd of 653 fans inside Alex Rodriguez Park at Mark Light Field.

“We absolutely played a complete game,” head coach Gino DiMare said. “If you can play a complete game, I’ve got to think the majority of the time, a very high percentage you’re going to win those games and that’s what we’re trying to do. Be more consistent, pitch better from the starters to the bullpen, make sure they do their job. We need to swing the bat better as a team, as a one through nine lineup, and do the things that we need to do to be successful offensively and play good defense and we did pretty much a good job of that tonight.”

A Christian Del Castillo sacrifice fly in the bottom of the first got Miami on the scoreboard, but the Hurricanes opened the floodgates in the second. The Canes scored 10 runs in their second turn at-bat against App State, knocking starter Trey Tujetsch out of the game while sending 14 batters to the plate in the inning.

The 10 runs were the most scored by Miami in an inning since the Hurricanes brought 12 runners across home plate in the bottom of the fourth inning against Rutgers on Feb. 15, 2015.

Miami had eight hits in the second inning, while Raymond Gil and Anthony Vilar both recorded a pair of hits in the frame. Gil was the last Hurricane with two hits in an inning, accomplishing the feat on April 19, 2019, at Louisville. Vilar and Gil each finished with three hits on Saturday night.

“It’s a great feeling, definitely a confidence booster and we know as an offense that we can do this,” Gil said. “We know how talented we are, and that if we just put good at-bats and string a couple heads together that we can explode for a 10-run inning like we did in the second.”

Christian Del Castillo added a two-run homer in the fifth that made it 13-0 in favor of the hometown Hurricanes.

Miami starter Jake Smith turned in a strong outing in his first weekend start as a Hurricane. The right-hander scattered two hits and struck out six Mountaineers over five shutout innings to earn his second win of the season.

“He deserves to be that guy,” DiMare said. “It’s his shot, he’s got the opportunity, We’re going to give it to him. He earned it and he didn’t do anything to disappoint from my standpoint. I’m happy and hopefully he feels confident, and he’s going to be a guy for us down the stretch.”

Jared Thomas crushed a two-run homer in the bottom of the sixth and CJ Kayfus added a solo homer in the inning to cap the scoring for the Canes.

App State finally got a run across in the seventh, as Tyler Leek singled off reliever Jordan Dubberly and scored on an RBI single by Carson Arnold.

Miami relievers Anthony Arguelles, Nicholas Regalado and Jamar Fairweather each tossed a scoreless inning of relief in the victory.

Miami and App State will close out the weekend series Sunday afternoon beginning at 1 p.m.