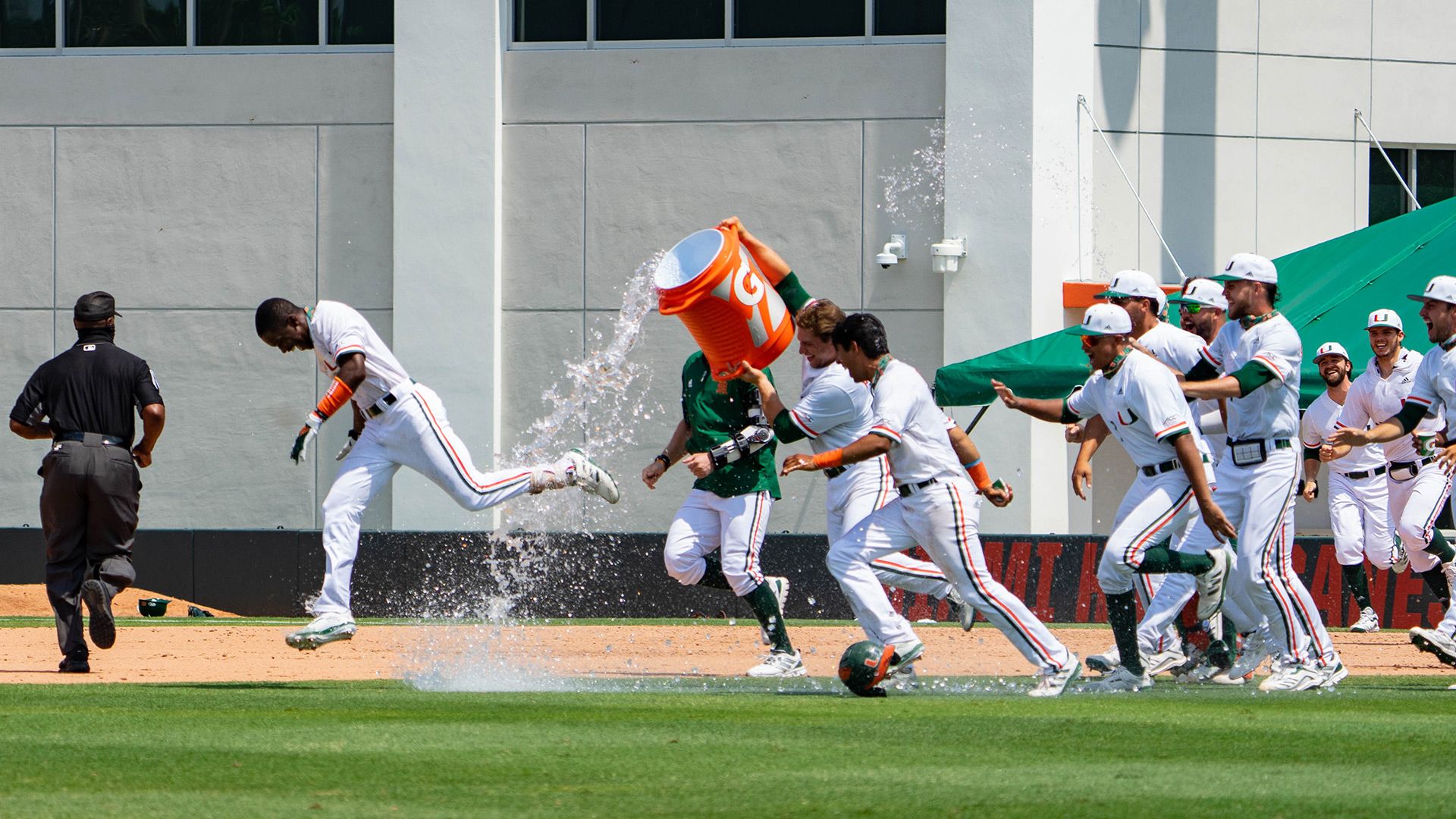 Miami Walks Off to Sweep Clemson

CORAL GABLES, Fla. – Walk-off wins are always fun, but they’re even better when they clinch a series sweep.

Sunday’s hero was Tony Jenkins, delivering the game-winning RBI in the bottom of the ninth to push the Canes past Clemson, 3-2, before a sold-out crowd of 620 fans inside Alex Rodriguez Park.

“Getting sweeps is not easy,” head coach Gino DiMare said. “We’ve had it done to us a few times and we need to obviously run some off ourselves here to make up [for it], but more importantly, just play good baseball. The last two games were obviously a little bit different where we opened the games up and had much bigger margins. Winning one-run games, those are very, very important. Those are going to be more the type of games you’re going to play later on in tournament time, so it was good to see.”

After a pair of lopsided losses in the first two games, the Tigers had built some momentum against the Canes by tying the game against Miami’s closer, Carson Palmquist. But Miami got some timely hitting to earn its second walk-off win of the week.

CJ Kayfus, who entered the game as a pinch runner in the bottom of the sixth, led off the ninth with a base hit up the middle. Two batters later, Dominic Pitelli ripped a double to right that put runners on second and third with one out, setting the stage for Jenkins to be a hero.

“It was just great to be in that position and that situation at the time and an even better feeling to get that done for the team,” Jenkins said. “I’ve just got to stay ready whenever my name gets called and I felt like I did that today. It felt really great celebrating with the guys. Everyone seemed very proud of me and I’m just thankful for my team.”

The fourth-year outfielder, which entered the game as a defensive replacement in the top of the seventh, lifted the first pitch he saw from Clemson closer Geoffrey Gilbert deep to center field, allowing Kayfus to tag up and score the winning run and set off a raucous celebration on Mark Light Field.

“I was so proud of him just being aggressive there,” DiMare said. “Come up first pitch, got a pitch he can drive to the outfield. He hasn’t done a very good job of being aggressive and in that situation, you’ve got to be aggressive, and he got a good pitch to drive.”

The victory was Miami’s eighth home win in a row over the Tigers. It also marked Miami’s second consecutive sweep of Clemson in Coral Gables and its fifth straight series win over the Tigers.

While it was a sacrifice fly that clinch the win, Miami got a major boost from the home run all weekend. Seven different players combined for nine homers against Clemson this weekend, with Yohandy Morales getting the bats going for the Hurricanes in the bottom of the first when he hit an opposite-field homer for the second consecutive day. The true freshman’s solo blast extended Miami’s home run streak to nine straight games dating back to April 4.

The Tigers tied the game in the top of the third, as Kier Meredith delivered a two-out RBI single against the shift that drove home Dylan Brewer to make it 1-1.

But Miami went deep again in the bottom of the third, regaining the lead when Jordan Lala hit an 0-2 pitch from Clemson starter Nick Hoffmann over the right field wall to make it 2-1.

UM starter Jake Garland was strong for six innings, allowing one run on three hits while striking out a career-high six Tigers.

The Hurricanes turned the ball over to Palmquist in the seventh, but Clemson mustered a rally after a pair of seeing-eye singles put runners at the corners with one out. Dylan Brewer hit a grounder to short, but the Canes could not turn the double play and Adam Hackenberg scored to tie the game at 2.

“He wasn’t at his best, but he’s been almost unhuman up to this point,” DiMare said of Palmquist. “We’ve talked to the team about this weeks ago that there’s going to be a day where he’s off, and we’ve got to make sure we pick him up and we did that today. I’m very proud of the team, it’s just a great, great, great win, and a great sweep for us.”

The Canes will close out a five-game homestand Wednesday when FGCU travels to Mark Light Field. First pitch is scheduled for 6 p.m.