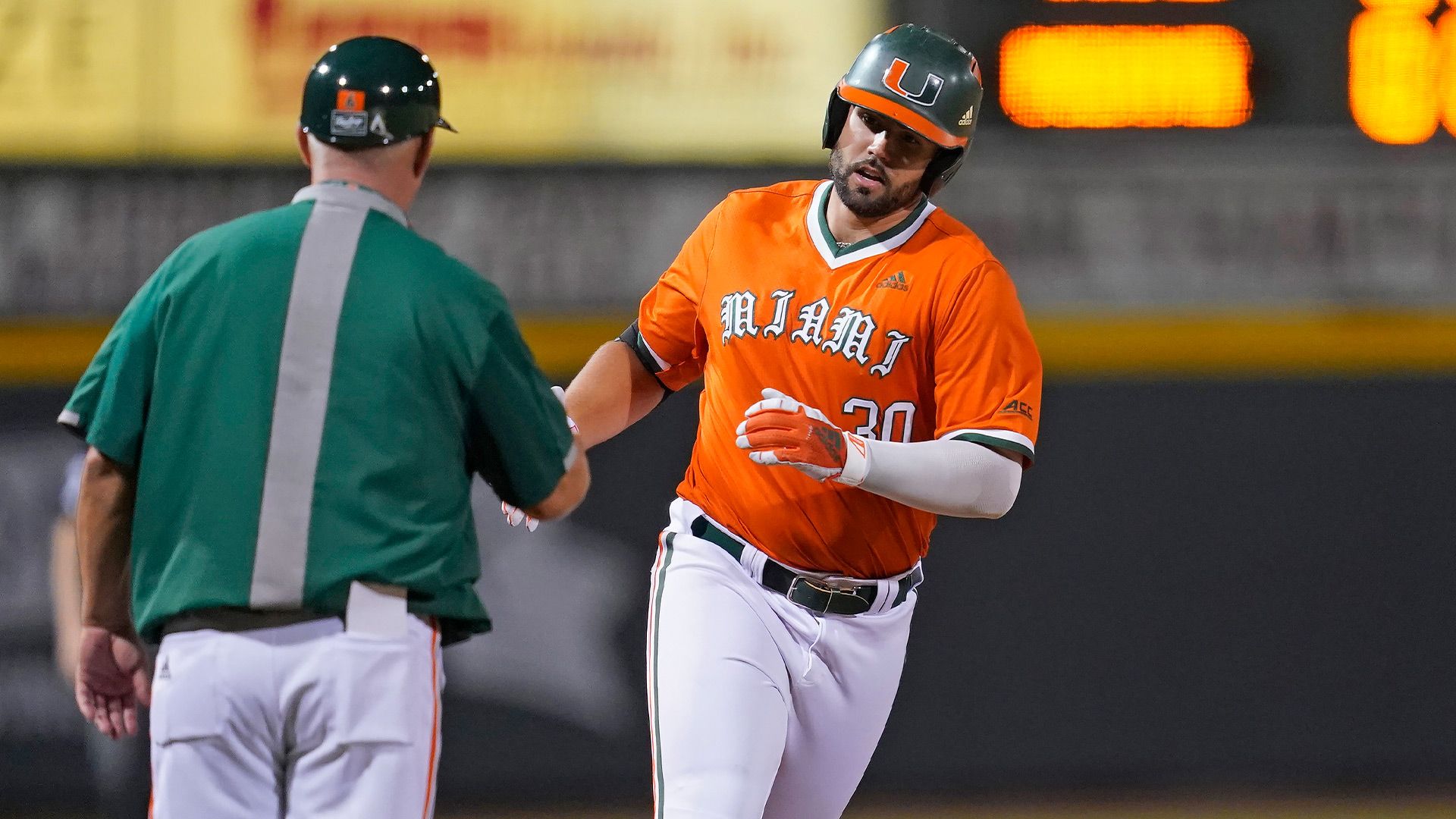 Canes Bounce Back and Crush FAU

BOCA RATON, Fla. – The Miami Hurricanes rebounded from a tough weekend against a rival with an offensive explosion at FAU.

Just two days after being shutout, the No. 18 Canes exploded for 14 runs on a season-high 17 hits in a midweek victory over the Owls. First baseman Alex Toral became the first Hurricane to drive in six runs since Jacob Heyward in 2015, powering Miami to a 14-9 win.

“We had a team meeting with all the guys and the coaches at our field today.,” Toral said. “I think a lot of guys let a lot of things off their chest that they needed to and it helped us play like the team that we are supposed to be and the team that we’re going to be. Coming out here and winning this game definitely means a lot to us, especially after the tough weekend we had. At the end of the day, adversity builds character and I think it showed today.”

Toral gave Miami a boost in the top of the first, crushing a line drive over the fence in right-center for a grand slam. It was the second grand slam by a Hurricane in the last seven days, as Gabe Rivera hit one at FGCU on March 17. The blast set the tone for an offensive outpouring by the fourth-year player, who posted a career-high six RBI, and his Miami teammates.

“It’s a big relief obviously after last week,” head coach Gino DiMare said. “It’s such a crazy thing that I can’t even explain it. Toral gets the grand slam in the first inning and you could tell it put guys more at ease and relaxed. We’d been waiting all weekend to get something going and couldn’t do it and then came out here and it was great to see our offense come out with the most hits on the season today. There were a lot of extra-base hits and home runs and just hit the ball hard. We put some of our big boppers and veteran guys in the lineup and they came through, so really good to see.”

The Canes (10-7) had an even better showing in their next turn to bat, scoring eight runs against three FAU pitchers. Jordan Lala, Adrian Del Castillo, Toral and Raymond Gil each had RBI hits in an inning that saw Miami send 12 batters to the plate.

“I felt great today,” Toral said. “I think after Sunday’s game I might have taken about 500 swings off the tee by myself in the indoor and just cleared my mind. That helped me feel like myself a little bit. Just coming out here and playing like the guy that I know I am and the guy that I’m supposed to be for this team, I think it’s going to help me get back on track and continue to provide runs for our offense.”

FAU (10-9) got a pair of runs off Miami starter Jake Garland despite having just one hit in the bottom of the second. The Owls took advantage of an error and scored on a bases-loaded walk before Garland settled down to get out of the inning.

Miami’s bats continued their success in the third, as Anthony Vilar led of the inning with a solo bomb to right. The homer was his team-leading fourth of the season and gave the Canes a 13-2 advantage.

The Owls responded in the bottom half for the second consecutive inning, as Nolan Schanuel hit a solo homer and Nicholas Toney added a three-run shot that brought FAU within seven, 13-6.

Rivera belted Miami’s third homer of the game, a one-out solo shot in the fourth that have the Hurricanes 14 runs.

But FAU refused to go away quietly, adding two more runs in the fifth inning. Garland, who picked up his third win of the season, allowed eight runs (six earned) on eight hits over five innings while striking out three Owls.

Jordan Dubberly followed Garland on the mound and was outstanding, allowing just one run over four innings while striking out a career-best four batters to earn his first save as a Hurricane.

“It was really good to get back out there and have a good outing,” Dubberly said. “It’s really makes it a lot easier with a defense like we’ve got. I was just throwing strikes and let them work behind me. I thought I had a really good day locating the ball with all three of my pitches.”

Dubberly has provided quality long relief in his last two outings, catching the attention of his head coach with his ability to control an opposing lineup.

“He’s been getting better and better,” DiMare said. “He’s a guy who came off of surgery and it usually takes time, a little more than a year. Each time you could just tell his velocity tick a little higher and just all his overall command of his pitches gets just a little bit better. He’s going to see more important roles for us as we move forward, but great, great job by him of kind of shutting down because they were starting to swing the bat too and score some runs there and he did a good job of shutting them down.”

Miami continues its road swing this weekend, traveling to Virginia for a three-game series against the Cavaliers that begins Friday at 4 p.m.