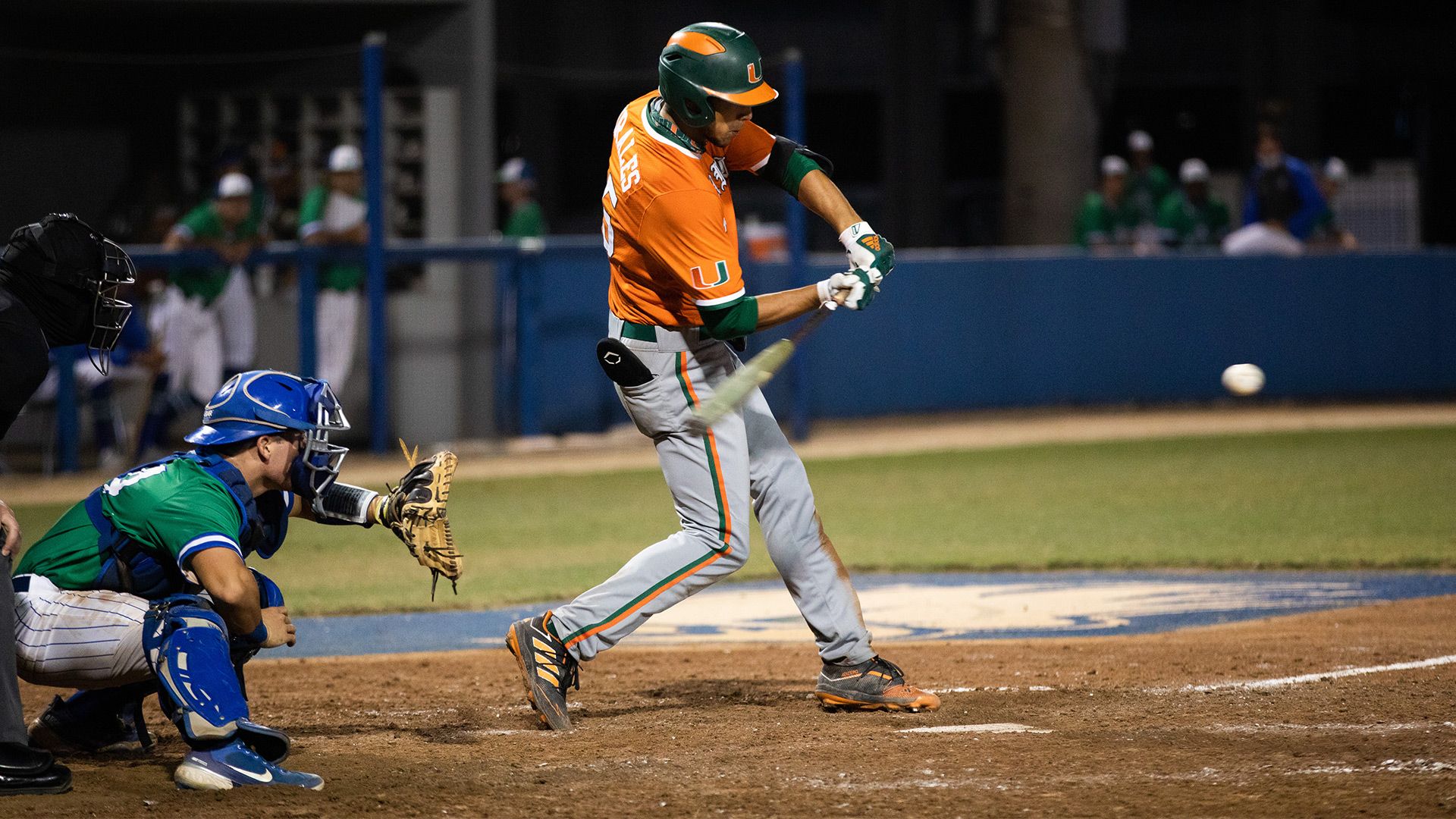 FORT MYERS, Fla. – A seven-run fifth inning propelled the Canes to a season-high 15 runs in their win at FGCU on Wednesday night.

The No. 5 Hurricanes (9-4, 5-3 ACC) posted a season-best 15 hits in their 15-2 victory over the FGCU Eagles (10-5) inside Swanson Stadium, but it was Gabe Rivera’s grand slam in the top of the fifth that got the Hurricanes offense going.

“We’re getting hot, we’re getting confident and it’s a great time to get hot right now,” Rivera said. “We’ve got to keep swinging the bat, keep working hard keep, staying consistent with our early work and in practice. I think we’re on the right track and just have to keep it going. We’re not done yet.”

Miami’s offense got a boost from the brothers Del Castillo, as Adrian led off the top of the second inning with a triple off the right field wall. Older brother Christian followed with an RBI single to right off FGCU starter Gus Carter, pushing home Adrian and giving Miami a 1-0 lead.

The Canes added on in the fifth, as Carlos Perez led off the inning with a base hit and came around to score when Yohandy Morales ripped a two-run double to left-center that knocked Carter out of the game and put Miami ahead by three.

Lefty reliever Mason Miller got himself in a jam, walking Adrian Del Castillo and giving up a run when Christian Del Castillo grounded to short and the Eagles could not complete a throw to second. Miller walked Alex Toral to load the bases before he was lifted in favor of right-hander Hunter McGarry.

Rivera welcomed the reliever to the game by crushing the first pitch he threw over the left field wall for a grand slam that gave the Hurricanes an 8-0 lead.

“Gabe hadn’t been playing a lot and got an opportunity today and took full advantage of it,” head coach Gino DiMare said. “He hit the ball hard his first at-bat and then, of course, he hit that grand slam on the first pitch and that was the nail in the coffin really. We’re hitting him down in the lineup and pitchers know they have to be careful pitching to him because if they give him a good pitch to hit, he can drive it out of the park. It was great to see. I’m glad he took advantage of the opportunity and he’ll get another opportunity to play it. That’s how it works.”

FGCU got on the scoreboard in the bottom of the fifth, as designated hitter Stephen Wilmer led off the inning with a homer off Miami starter Jake Garland.

“In the fall of last year, I didn’t do a very good job of responding to things like that,” Garland said. “I would let it get to me and that would affect the rest of my outing. You’ve just got to look at it it’s one pitch and you still have another chance to redeem yourself, so fight right back. I got a strikeout with the next guy, so that got my momentum going again I was right back on the same track that I was on before the home run.”

The right-hander settled in after the homer, holding the Eagles to just one run on five hits over a career-high seven innings.

“I’m really impressed with Jake,” DiMare said. “It’s amazing how many ground balls he’s gotten. There were a ton of them today, double-digits for sure, and just a lot of poise. I thought he did a good job. In those last outing against FAU, I thought his changeup was his pitch. Today, to me it was his fastball, really just the sinking fastball and getting guys to hit the ball into the ground and he located his fastball. Just a great overall job really for everybody but it does start on the mound and he did a great job.”

Miami’s bats got back to work in the sixth against right-handed Tyler Shuck, loading the bases before Christian Del Castillo drove in a pair of runners with a base hit to left.

An inning later, Miami added three runs, with Morales and Adrian del Castillo each driving in a run with RBI hits to make it 13-1 in favor of the Hurricanes.

True freshman Jose Izarra notched his first hit as a Hurricane in the top of the eighth, smacking a two-run single up the middle that gave Miami a 14-run lead.

FGCU scratched a run across in the eighth against reliever Jake Smith, as Jacob Lojewski doubled home Brian Ellis, but the right-hander struck out the side and Andrew Walters tossed a scoreless ninth to wrap up Miami’s ninth win of the season.

“Swinging the bats and scoring runs takes a lot of pressure off of your team, just knowing that you can do that,” DiMare said. “For some of our veteran guys, it was just a matter of time and they got it going, especially the guys at the front of lineup in Lala, Vilar and Del. Yoyo has been swinging the bat well and, of course, Delly has just been consistent and he seems to be our most clutch hitter. He comes thru in all these big situations. It’s good that we’ve got the offense going and we’re getting ready now for a big weekend.”

The Hurricanes are back in action this weekend against rival Florida State. The three-game series between the Canes and Seminoles will begin Friday at 7 p.m.