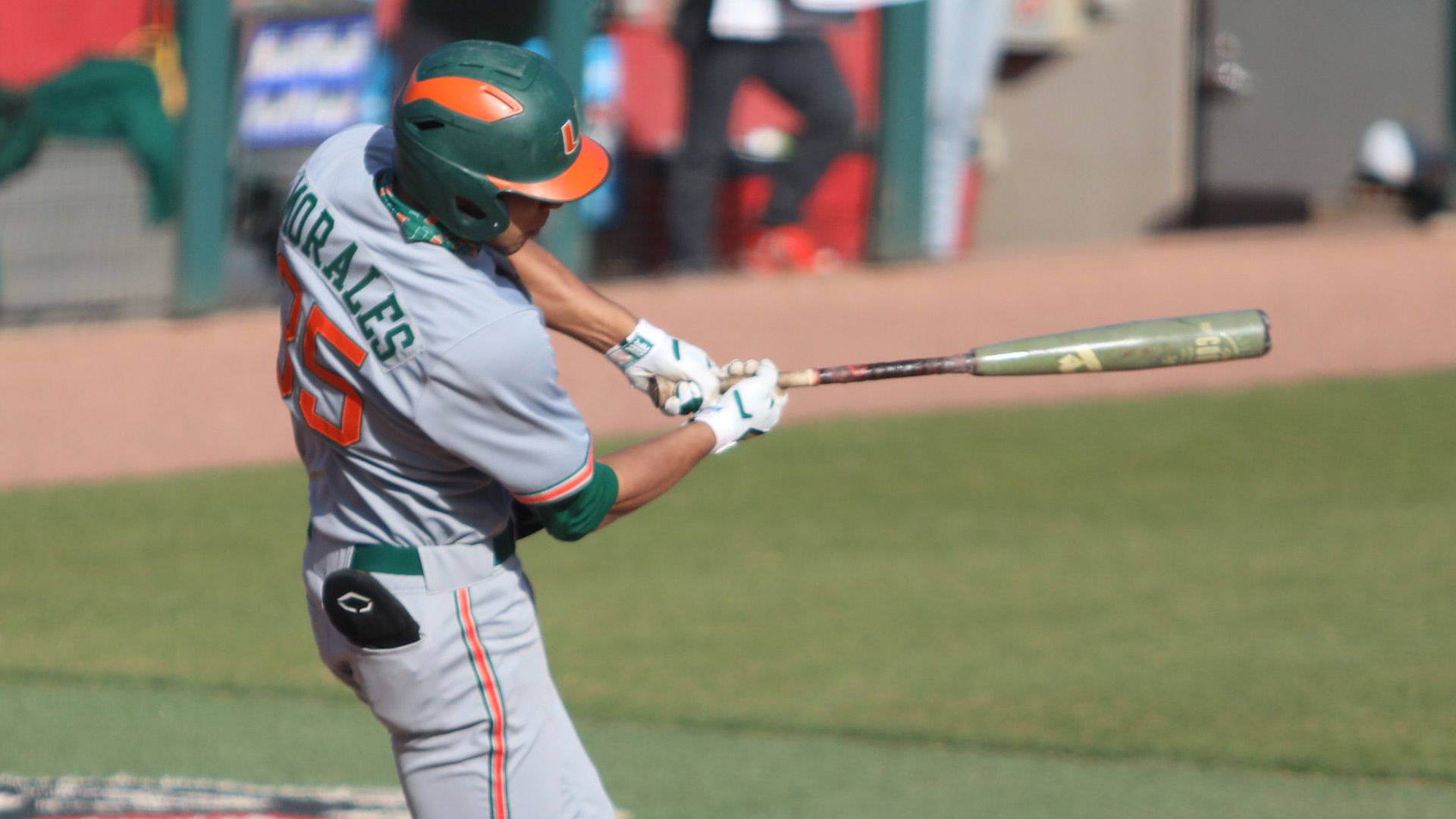 RALEIGH, N.C. – It took longer than expected, but Miami’s powerful offense made a big impression on Sunday at NC State.

“We played a clean game,” head coach Gino DiMare said. “We played very solid defense, we pitched well – [Victor] Mederos was okay today, but the bullpen was outstanding the last two days with guys like Ben [Wanger] and [Anthony] Arguelles and [Carson] Palmquist — and, of course, we hit the ball today. It was a great team effort. It was nice to see us have a big inning because we haven’t had too many big innings and put a bunch of hits together this year and it was really nice to see us hit the ball out of the ballpark. We need to get some more power and thump in our lineup, which is something we should have, so it was good to see that today.”

Trailing 3-0 after five innings, Miami’s bats came alive in the top of the sixth.

Anthony Vilar started the rally when he smashed a two-run homer to right and Yohandy Morales followed with a solo shot to center. The back-to-back homers evened the score at 3 apiece and knocked out NC State starter Matt Willadson after five-plus innings of work.

“I just wanted to make contact and not try to do too much,” Morales said. “I had to get on base, no matter what, to get everyone going. It was an amazing feeling. I was pumped the whole way rounding the bases knowing I just tied the game with one swing of the bat.”

Adrian Del Castillo welcomed lefty reliever Chris Villaman to the game by crushing his first homer of the season, wrapping up a barrage of Miami homers in the inning that put the Hurricanes ahead, 4-3. Sunday marked Miami’s first back-to-back-to-back homers since Randy Batista, Michael Burns and Romy Gonzalez all went deep in the ninth inning at Boston College on April 29, 2017.

“It felt great to finally pull through in a great situation to give us the lead,” Del Castillo said. “The season hasn’t been going my way lately but I’m not worried because if it isn’t me, my guys will pick me up.”

The Hurricanes sent 11 batters to the plate against three different NC State pitchers in the sixth, as lefty Kent Klyman relieved Villaman and walked Dominic Pitelli to load the bases before issuing a free pass to Jordan Lala to cap a five-run Miami rally that put the Canes ahead, 5-3.

“Today was a big day for us in that department and it’s part of our offense, having some of the power guys that we have,” DiMare said. “Yoyo, obviously, he’s got some power and so does Del and Vilar hit one out today, too. We’re still trying to get a feel for it, but I feel better after this series. We went with the same lineup a couple days in a row for the most part and I’d like to see these guys play for a little bit and see how consistent we can be. I really like it with Dom playing short and Yoyo at third. I just think it solidifies our defense and of course, both guys had good weekends swinging the bat.”

NC State got a run back in the bottom of the sixth when Jose Torres hit a bases-loaded sacrifice fly to center that drove in Devonte Brown, but right-hander Anthony Arguelles came in and threw 1.1 shutout innings to earn his third win of the year.

“Arguelles is really settling in the role he is in for us,” DiMare said. “He’s got one of the best breaking balls on our team and he’s got great demeanor on the mound. He gets after it, throws strikes, goes after guys and he’s got a little bulldog in him.”

Morales added an insurance run when he destroyed another solo shot to center to lead off the top of the seventh. The blast that gave the true freshman his first multi-homer game as a Hurricane. He became the first Miami freshman with a two-homer game since Del Castillo hit two in a postseason game against Central Michigan on May 31, 2019.

Carson Palmquist was dominant at the back of Miami’s bullpen, striking out three over two shutout innings to pick up his fourth save of the season.

Miami will play its first midweek game of the 2021 season Tuesday, hosting FAU at 6 p.m. inside Alex Rodriguez Park.