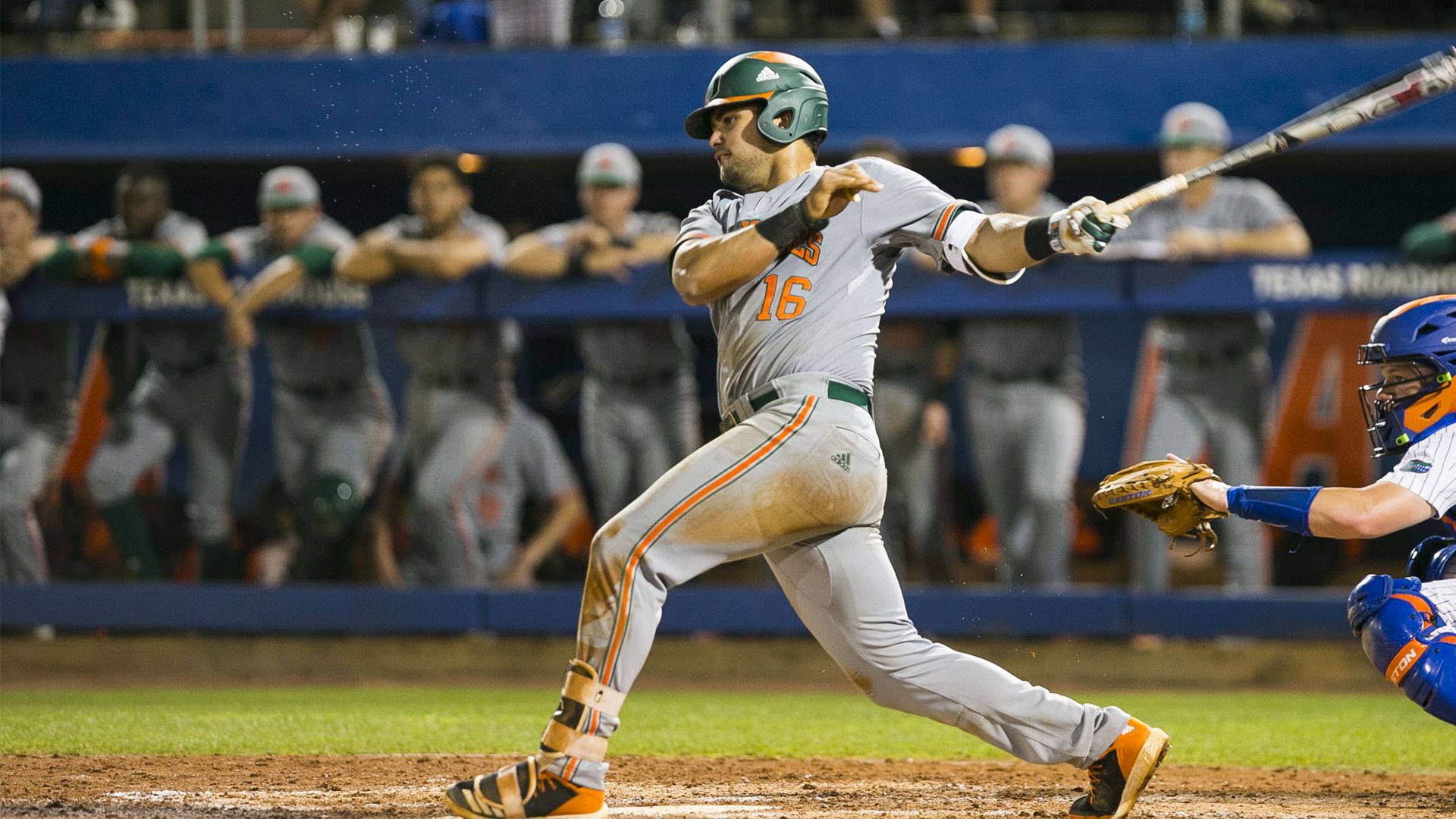 GAINESVILLE, Fla. – Entering the ninth inning, most fans inside Florida Ballpark thought they were going to witness a victory by the No. 1 Gators. But No. 11 Miami had other plans for Saturday’s outcome.

For the second consecutive day, Miami brought the tying run to the plate in the ninth inning. But unlike Friday, the Hurricanes were able to complete their comeback attempt. Four innings later, Raymond Gil’s two-out RBI single proved to be the game-winning hit as Miami defeated Florida, 10-9, in 13 innings.

“I think yesterday’s game was a telltale sign of what happened today,” head coach Gino DiMare said. “I think we learned a lot about our team last night. We lost, but in losing we did learn that they never gave in and they never gave up and they kept fighting. We battled right there to the end and we brought the tying run to the plate and we put up four runs in that last inning and it carried over.”

Down 8-5 in the ninth, Miami loaded the bases with one out as Anthony Vilar, Adrian Del Castillo and Alex Toral all worked walks against Florida reliever Franco Aleman. Christian Del Castillo was hit by a pitch, pushing home Vilar and keeping the bases full of Canes. Pinch hitter Ben Wanger popped out, but Tony Jenkins walked to drive in his third RBI of the day and make it 8-7.

Freshman Dominic Pitelli, who posted a multi-hit game in his debut on Friday, turned in the best at-bat of his young Hurricanes career. The shortstop walked with the bases loaded and two outs, pushing home pinch runner Jacoby Long to tie the game at eight apiece.

Ben Specht came in to relieve Aleman and got a flyout to end the inning, but Miami evened the score without a single hit in the inning. The Canes had five walks and a hit-by-pitch, scoring three runs in the ninth inning to give them new life.

Hurricanes closer Carson Palmquist had a pair of strikeouts and Jordan Lala made a diving catch in left field to end the ninth and send the game into extra innings. Palmquist was outstanding in relief for Miami, allowing just one hit and striking out four over three scoreless innings.

“We feel good about our bullpen in terms of our depth,” DiMare said. “We have more depth than we probably had here in a long time. And then the guys at the end there were just outstanding. With Palmquist, we weren’t really  planning on going three innings with him, but the second inning wasn’t too many pitches, so we were able to in that third inning that he came back for us. There were some lefties left we’re going to hit, so we asked him how he felt and we decided we were going to go with him, which means we can’t use him tomorrow but that’s okay. I told [pitching coach] J.D. [Arteaga],  ‘we just got to win this game. It’s a big game. We’ll figure it out tomorrow.’”

Both sides were retired in order in the tenth, but the Canes threatened in the 11th. Wanger walked with two outs and Jenkins singled to put runners at the corners. With the left-handed-hitting Pitelli due up, Florida pulled Specht in favor of lefty Jordan Butler. Miami countered with Gil off the bench, but the fourth-year player struck out to strand the pair of runners and end the inning.

“This game was long and it was tough,” Gil said. “It all depended on who was more mentally tough and wanted it more. This game shows us coming together as a team and putting together a comeback so it’s it’s a really good thing.”

Miami finally broke through in the 13th, and Gil got some redemption. With runners on first and second and two outs, the veteran singled to the right side and Christian Del Castillo scored from second to put Miami ahead for the first time in the series.

“I just try to leave it in the past and try to move on and do what the team needs to win,” Gil said. “My first at-bat, I came in to pinch-hit in a key situation and I didn’t come through. But I got an opportunity there late and I wanted to capitalize from it.”

“Ray Gil getting the game-winning hit is huge for him,” DiMare added. “He started yesterday and wasn’t in the starting lineup today, but he was ready to go and he got his opportunity and he stepped up for us.”

The Hurricanes got an insurance run when Kris Armstrong dropped a throw at first base, allowing Lala to reach base and Wanger to score from third to make it 10-8 and give Wanger some breathing room as he returned to the mound for a second inning of work.

“I’ve been doing the two-way thing for a while now, so I’m kind of used to it,” Wanger said. “I was talking to J.D. about when I might have to go warm up because Carson, obviously, couldn’t go the rest of the way. At the end of day, I was just trying to help the team win and we got the win.”

The extra run proved crucial, as Florida put runners on first and second with one out and Kirby McMullen singled to center to bring the Gators within one. But Wanger struck out Butler and got Armstrong to pop out to CJ Kayfus at first base, wrapping up his first win as a Cane and securing the victory for Miami.

“I’m sitting there watching and I have all this confidence in Ben because he’s been doing this for a long time now,” DiMare said. “It’s his sixth year and he’s been a closer for a lot of that time. It was just a good feeling, almost like we had two closers out there, and Ben’s composure was outstanding.”

Miami faced two separate five-run deficits on Saturday, beginning with a difficult first inning where the Gators took advantage of multiple defensive missteps by the Hurricanes.

Florida leadoff hitter Jacob Young grounded to first and Toral could not handle the bouncing ball. Young reached on the error and scored two batters later when Nathan Hickey singled to left to make it 1-0 in favor of the Gators.

Another defensive miscue by the Canes contributed to another pair of Florida runs in the bottom of the first, as Jenkins misplayed a base hit to center off the bat of designated hitter Jordan Butler. The single drove in Hickey, but the error allowed Kirby McMullen to score from second.

Shortstop Josh Rivera kept the Florida rally going with an RBI double to left that pushed home Butler and Rivera came around to score on an RBI single by Sterlin Thompson that capped a five-run first inning where the Gators sent all nine batters to the plate.

A Florida error in the top of the second opened the door for a Miami run, as a shifted Rivera booted a grounder to the right side off Toral’s bat that allowed the big first baseman to reach base. Jenkins drove him home with a two-out base hit to right that got the Canes on the scoreboard.

Rosario settled down after the first, recording his first collegiate strikeout when he fanned Young to open the second inning. The right-hander made some history on Saturday, becoming the first Miami true freshman pitcher to start a game on opening weekend since Bryan Radziewski in 2011.

Miami’s bats put together a two-out rally in the fifth when Vilar laced a double down the left field line and Jordan Lala sped home from first. Adrian Del Castillo followed with an RBI double of his own, smacking a 3-2 pitch from Florida starter Jack Leftwich into right field and sending Vilar home to put Miami within two runs, 5-3.

Right-hander Jordan Dubberly opened the fifth inning on the mound for Miami, replacing Rosario after four innings. The freshman had some tough luck in his debut, as only two of the five runs he allowed were earned. Rosario allowed six hits and struck out four in his first outing as a Hurricane.

The Gators offense got going against Dubberly, as Butler walked to open the fifth and scored on an RBI double by Kris Armstrong. Rivera doubled home Armstrong to give Florida a 7-3 advantage through five frames. Florida added another run off Dubberly in the sixth, when Hickey hit a one-out solo homer to right.

Miami had two base runners reach against left Trey Van Der Weide to open the seventh inning, with Pitelli scoring on an RBI groundout to second by Adrian Del Castillo. But the Hurricanes could not add more, as Yohandy Morales grounded out to short and stranded Lala at third.

Toral led off the eighth with a base hit to left and Florida head coach Kevin O’Sullivan turned to Franco Aleman to protect a four-run lead late in the game. Christian Del Castillo worked a walk and Toral advanced to third on a wild pitch. Two batters later, Jenkins singled to center to drive in his second run of the game and bring Miami within three, 8-5.

“He’s our best outfielder so it helps us if he can swing the bat and get on base,” DiMare said of Jenkins. “That’s the thing I ask of him, to get on base, and he did more than that. He got some big hits and I’m very happy for him.”

An inning later, Miami’s improbable three-run rally without a single hit happened and the Hurricanes carried that momentum into a series-tying victory.

“The night before opening game, we had a team meeting and we discussed that no matter what happens with this team, we’ve got to stay together,” DiMare said. “There’s so many things going on, and this needs to be a team like our motto says, ‘Whatever it takes, all in,” and never, ever give up, no matter what happens. We found a way to come back, we fell behind again, we came back again and just found a way to outfight them there and get the W. It’s a big, big win for us and now tomorrow is obviously a really big game.”

Miami and Florida will decide their annual series Sunday in a game scheduled to begin at 1 p.m., with the Hurricanes sending true freshman right-hander Victor Mederos to the mound opposite second-year lefty Hunter Barco.