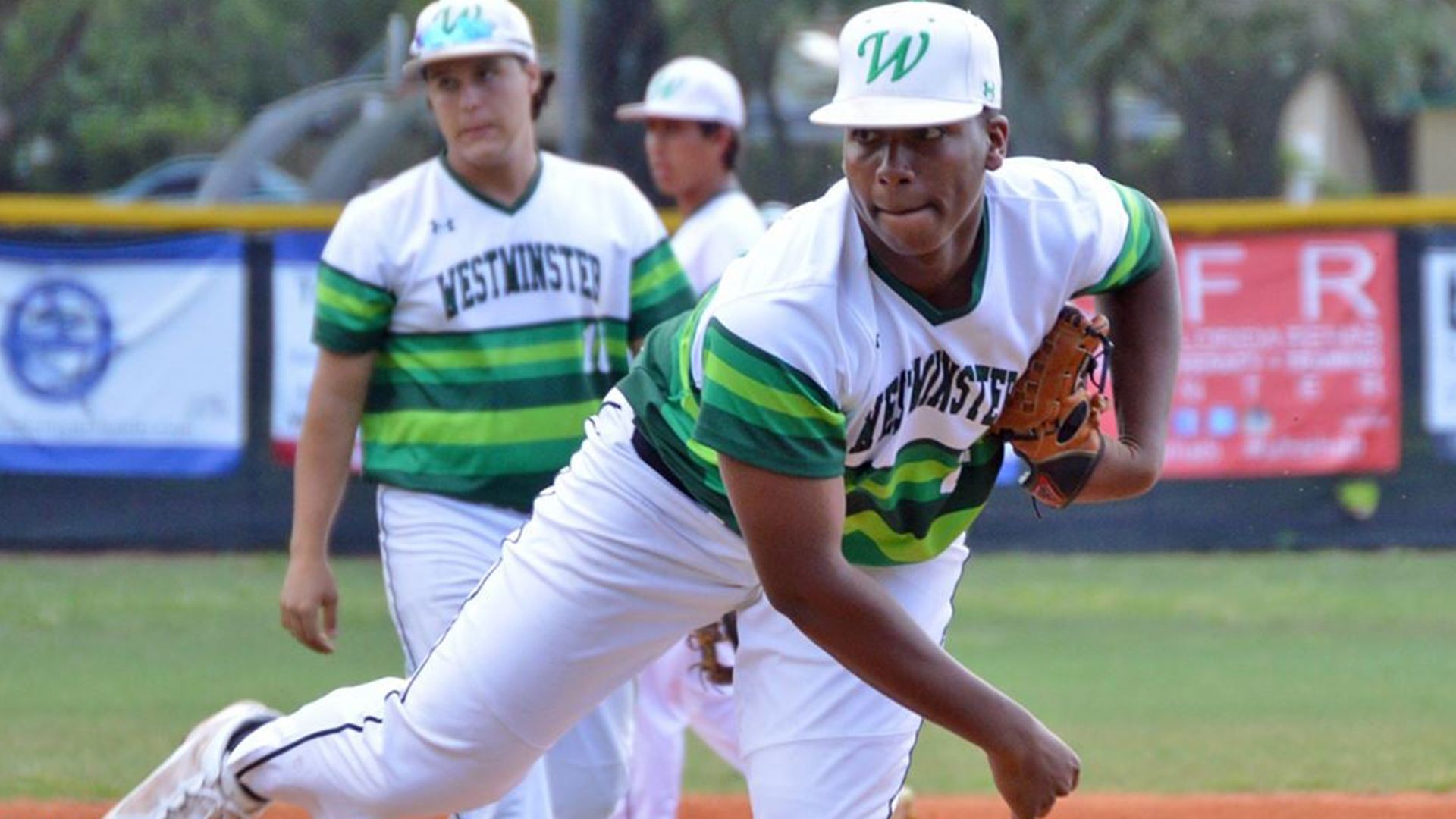 The freshman right-handed pitcher is motivated by a desire to make his mark and Fairweather hopes to start doing just that in his first season as a Miami Hurricane.

“I’m super competitive and I want to be the best at everything I do,” Fairweather said. “You want to race down the street? I’ll do it. Win or lose, I am going to give everything I have. I’ll be angry if I lose and I’ll be happy if I win, but I’m going to always be coming for you every time. I bring that mentality with me every day to the field and it pushes me to get better and be the best player I can be.” 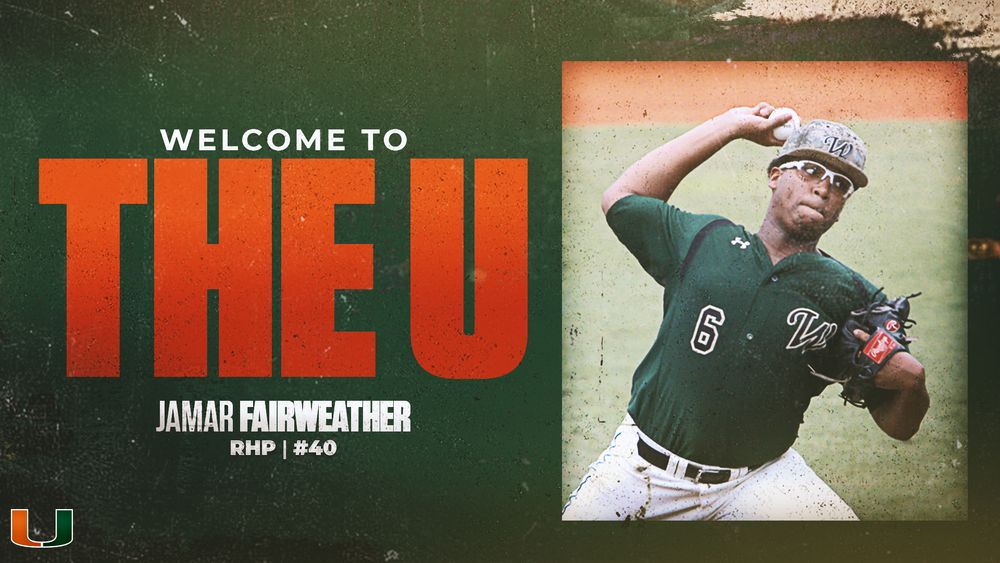 Fairweather has a lot to live up to, as the right-handed pitcher comes to Miami from local powerhouse Westminster Christian — the same school that produced MLB stars Alex Rodriguez and Doug Mientkiewicz.

While Westminster has developed a ton of baseball talent, Miami has benefitted greatly from that pipeline. Miami head coach Gino DiMare, pitching coach J.D. Arteaga and third-year infielder Anthony Vilar are a small sampling of Warriors turned Hurricanes and Fairweather hopes to uphold the standard established by those that came before him.

“Westminster produces good ballplayers and has for a long time now,” Fairweather said. “Gino and J.D. are two guys that established that legacy at Westminster and then here at Miami and guys like Vilar have continued that. For me to be here now, it just motivates me to do my best and continue that legacy of Westminster players making an impact at Miami.”

Vilar believes Fairweather has what it takes to be successful at Miami because of his determination to come away victorious in everything he does.

“His role in high school was always a starting pitcher but even when he wasn’t pitching, he always wanted to win, he always wanted to help us win whichever way he could,” Vilar said. “I expect that to be the same for us this year because he’s always willing to do whatever it takes to win.”

For Fairweather, the opportunity to rejoin Vilar in the Miami clubhouse is an exciting one and the two high school teammates picked up where they left off as soon as the newcomer arrived on campus in August.

“It’s fun to get to play with Vilar again. I played with him for two years and I’ve seen what he can do, both as my teammate and watching him here at Miami the last two years. He’s told me a lot about the program and helped me get a jump on things, especially when I first got here. I am glad we get to be teammates again.”

While Fairweather is excited to be a Hurricane, he did not originally envision himself in orange and green. In fact, the gifted young player committed to crosstown FIU before ever playing a high school game.

“Everyone knows that I was committed to FIU originally, but then I decommitted because I felt like I did it too soon and hadn’t really gotten a chance to see what opportunities were out there for me,” Fairweather said.

A talented two-way player in high school, Fairweather had his sights set on going away for college. But that changed after talking to former teammates that had done so.

“Originally, I did want to leave Miami, but I realized that cold weather is tough to play in,” Fairweather said. “Just talking to some of my friends that graduated before me and left Miami, they were like, ‘Dude, if I had the chance to, I would love to go play in Miami.’ That really stuck with me.”

As a junior in high school, Fairweather finally knew where he wanted to continue his academic and athletic career.

“Miami is home,” Fairweather said. “I am living basically down the street from The Light. I can see my mom all the time and my mom has never missed a game, so I wanted to make it easier for her to come watch me play as I get older. Between the opportunities I get as a student-athlete at Miami and the ability to be close to my family and have them come watch me play, it was the best situation for me, and I knew I wanted to be a Hurricane.”

While it took some time to come to that realization, Fairweather grew up a Hurricanes fan and had dreams of playing at The U. A longtime friend of Arteaga’s son, Ari, the two boys grew up wanting to play baseball together at Miami. But when Ari passed away after a car accident in 2019, Fairweather’s motivation to be a Hurricane changed from a plan with a friend to a way to honor someone close to him that was gone too soon.

“I just want to go out there and do what he wasn’t able to do,” Fairweather said. “We talked about it since we were like 13 years old how we were going to go to Miami together and we’re going to do so many big things together. And I just wanted to come out here now and represent him, represent my family, represent Miami and be the best player I can be.”

Miami presented unique opportunities for Fairweather that no other school could give him.

“I played with Ari before his passing and I felt like coming here would kind of help me honor him,” Fairweather said. “And playing for J.D. is a great opportunity because he is an incredible pitching coach. I was always close with him since I was super young because me and Ari played football together. But playing for J.D. and playing for Gino at a great school, I couldn’t ask for a better opportunity.”

Fairweather was an accomplished player in the ultra-competitive Miami high school baseball scene, excelling as a two-way player at Westminster Christian. The 6-foot-2, 225 lb., right-hander batted .345 with 11 homers and 68 RBI and went 15-6 with a 2.76 ERA and 155 strikeouts over 131.2 innings pitched in his four-year varsity career. Despite his success as both a pitcher and a hitter, Fairweather is focused fully on his abilities on a mound.

“Hitting was always fun. Being able to put up runs and shut down the game if I have to on the mound was a lot of fun in high school. But I realized that the higher you go in baseball, everything gets harder and harder and harder so it’s just that much harder that you have to work to be successful as a pitcher or as a hitter. I feel like hitting now is a lot more complicated than in high school because in high school you’re not seeing the 90s guys consistently like you would in college and you’re not seeing wipeout stuff. I get to focus on pitching now and I am excited to work on my stuff on the mound.”

"Playing for J.D. and playing for Gino at a great school, I couldn't ask for a better opportunity.”

His time working with Arteaga has been beneficial, as the gifted right-hander has learned a lot since arriving at Miami for the fall semester in August.

“Growing up playing baseball, you think you know a lot about the game. It’s something where you learn more and more every year but working with J.D. has really opened a new side of baseball to me,” Fairweather said. “I’ve been working on little things like he’s worked with me on my slider, and it’s gotten a lot better. Before it was kind of loopy and kind of slow but now it’s gotten tightened down and I can throw it a little bit harder, so I feel more comfortable with it.”

That slider is something Fairweather hopes will help him be successful in his first college season. In addition to working with Arteaga, he studies his favorite pitcher for ways to improve his game.

“As I grew up, people said I pitched like Luis Severino, so I started to watch his videos and study how he pitches and I started to see similarities, too,” Fairweather said. “I really do resemble him a lot like our mechanics are similar and we both have the same fire on the mound. He’s quiet but as soon as you see him take the mound, that other side comes out and you know he’s coming to work and that’s how I am, too.”

While his competitive fire fuels him on the field, he takes pride in being a great teammate off the field.

“Jamar is a really talented player, but I think the biggest thing that he brings is that he’s always there for you,” said fellow freshman and Westminster teammate Victor Mederos. “If you’re doing bad, he’s always there to pick you up. He’s a very good teammate and he’s a team player. His energy is always there and it’s something you can feel even when he’s not playing. Like we’re all in the dugout and he’s always supporting his teammates, which is what makes him the teammate that he is.”

Fairweather has been a great teammate off the field, but Mederos believes his roommate will be ready to take the ball whenever DiMare calls his name.

“He’s the type of pitcher that is very consistent with his stuff and he hits a spot whenever he needs to,” Mederos said. “Jamar is the kind of a pitcher that can get you off balance and gets out of innings really quick. Whenever Gino decides to put him in, I know he’s going to give it his all, he’s going to put his heart out there and try to help us win a championship.”

With the start of the 2021 season a little over a week away, Fairweather is feeling some nervous excitement about getting a chance to finally play for the Hurricanes.

“Definitely a little nerve-wracking, but I think if you’re not nervous a little bit then you may not care as much as you should,” Fairweather said. “To put that intensity on yourself, it’s really going to make or break who you are, and I am excited to get the opportunity to step on the mound and help this team win games.”

In addition to performing well for his team, Fairweather wants to help his recruiting class live up to the top billing bestowed upon it by industry experts.

“We came in as the number one recruiting class and everyone wants to win,” Fairweather said. “Our class came in here with a lot of hype, but we are determined to live up to our expectations. We all want to win so I’m excited to see what this team does.”