Baseball Will Open 2021 Season at Florida

CORAL GABLES, Fla. – The Miami Hurricanes will kick off their 2021 season against one of their longest rivals, as the Canes will open the year with a three-game series at the University of Florida, head coach Gino DiMare announced Tuesday.

“We’re opening up with Florida on the road in their new ballpark, which will be a great, great test for us and a huge challenge,” DiMare said. “They’ll probably be preseason number one – they already are in a few polls – and I’m sure we’ll be ranked pretty high as we already are in a few polls. It’s going to be a great, great challenge and a great test right out of the gate going to Gainesville.”

The 2021 season will be unique in many ways. It will feature six fewer games than usual, as the ACC has decided to reduce the regular season from 56 games to 50, while simultaneously increasing conference games from 30 to 36. This year will also mark the first time the Hurricanes start a year on the road since they traveled to Hawaii for a four-game set to start the 1997 season. 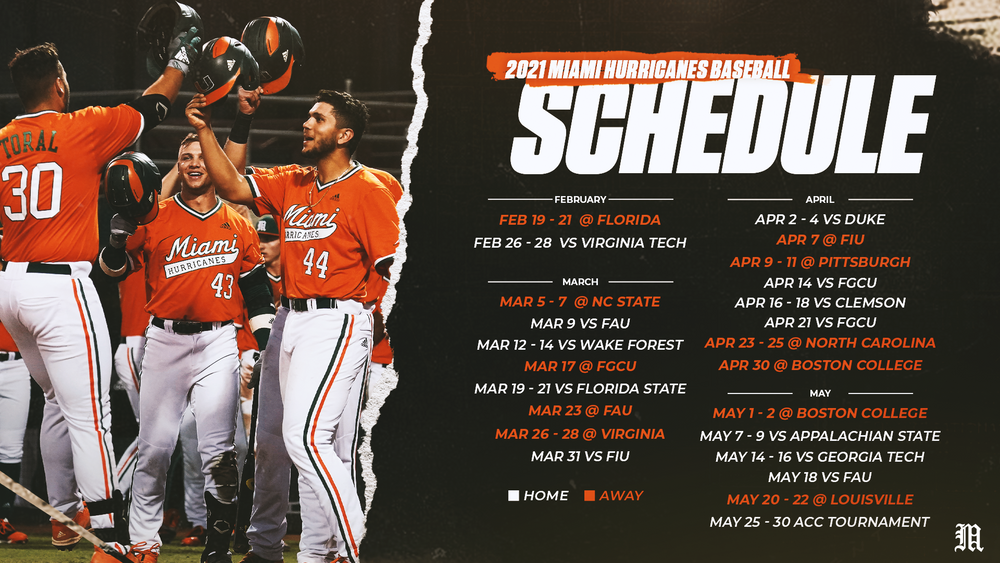 In addition to the three-game set at Florida, Miami will host a three-game series against Appalachian State from May 7-9 and will play eight midweek games to make up its 14-game non-conference slate. The Hurricanes will play two games against FIU (Mar. 31, Apr. 7) and three games against both Florida Atlantic (Mar. 9, Mar. 23, May 18) and FGCU (Mar. 17, Apr. 14, Apr. 21).

“Our weekday games are all going to be against FAU, FIU and Florida Gulf Coast and those are all good programs and are in a position to play in regionals year in and year out,” DiMare said. “And then every weekend we’re going to be in the ACC except two, and that’s opening weekend against the Gators and an exam weekend against Appalachian State. The bottom line is we’ve got to be ready to play every single day.”

Putting a schedule together has been challenging for baseball coaches across the country, as the uncertainty surrounding the COVID-19 pandemic forced teams to adjust the schedules they had originally prepared for the upcoming season.

“It’s been kind of nerve-wracking,” DiMare said. “There were a number of meetings with our conference and a lot of phone calls with me and other coaches from our non-conference teams that we play just trying to figure out how to navigate through this thing but I’m very pleased and happy to have our schedule for this season finalized.”

Miami’s baseball team will play 36 ACC baseball games in 2021, with six home and six road series. The 36-game conference slate is six more than previous seasons. While the increase in ACC games is new in 2021, all 12 conference series will be three-game sets, just as they have been in previous years.

“This is the first time I can remember where we have 26 games at home and 24 on the road,” DiMare said. “So, we’re basically split half at home and half on the road, which normally has not been the case. We normally play a few more games at home, but that’s the way it is with our conference and we got to make sure that we are ready to play every game, no matter where we are playing.”

“We’re playing four games a week and our guys have got to be mentally ready and focused to do that and I think they will be,” DiMare said. “We’ve got veteran guys that understand it and we’ve got some young, talented guys that are going to get thrown into it right away and they’re going to have to mentally be prepared for it.”

The only league opponent Miami will not face in 2021 is Notre Dame. The Canes have not faced the Fighting Irish since 2018, but were scheduled to travel to South Bend, Ind., last season before the COVID-19 pandemic cut the season short.

“We’re looking forward to it but we’ve got to be mentally more ready and tough than we’ve ever been because this will be the most challenging year,” DiMare said. “I look at it this way, the team that comes out at the top this year, to me, you can go back and say probably battled more obstacles than any other team in the history of college baseball.”

The Canes begin team practice on January 29. To view Miami’s 2021 schedule, click HERE. All times are subject to change.