MIAMI GARDENS, Fla. – The game Canes fans have been patiently waiting for finally happened and the Miami Hurricanes gave the orange and green faithful a big reward for their patience.

The Canes (1-0) defeated UAB (1-1) in Miami’s season opener, 31-14, before 8,153 masked and socially-distanced fans inside Hard Rock Stadium on Thursday night, with veterans like Cam’Ron Harris and Brevin Jordan, as well as newcomers like D’Eriq King and Quincy Roche making major contributions in the Hurricanes’ victory.

“Couldn’t be more proud of our players. Just, number one, everything that they did to get us to this day. Starting back June 15th, the first workouts, did everything we asked them to do in the summer, kept each other safe—just gave us the chance to play today,” head coach Manny Diaz said.

“And then our performance, it’s a season opener, there’s a ton of stuff to correct, but [I liked] just our demeanor, our temperament on the sideline, the way the guys supported each other and the way we just stayed after that UAB team,” Diaz continued. “That’s a really good UAB team. No one does what [we did to them] in terms of rushing yards and total yards. Everyone in this profession knows Bill Clark is an outstanding defensive coach and to run for over 300 and have almost 500 yards of offense is really impressive.”

While Miami posted 492 yards of total offense and its defense forced 11 punts, it was UAB that got a break with 3:24 remaining in the opening quarter as new punt returner Mark Pope lost the football while being tackled and the Blazers recovered to regain possession at the Miami 17. Two plays later, quarterback Tyler Johnson connected with Austin Watkins for a 16-yard touchdown to take a 7-0 lead.

The Hurricanes answered in a big way, as Diaz elected to go for it on fourth and one from the Miami 34 and the decision paid off when junior running back Cam’Ron Harris shot through a hole for a career-long 66-yard rushing touchdown. Jose Borregales followed with his first extra point and the two sides were even at 7-7 with 1:04 left in the first quarter.

“I thought that was pretty straightforward,” Diaz said of going for it on fourth down. “It was one [yard] to go and when you have the element of the quarterback’s legs, it just adds another gap and just gets somebody’s eyes off. And they were really in a sell-out, everybody-up-there defense, so once Cam [Harris] broke the front line, there was no one left to get him.”

Harris’ big run was a sign of things to come, as the junior finished with 134 rushing yards on 17 carries and a pair of touchdowns. Freshmen backs Jaylan Knighton (59 yards) and Donald Chaney Jr. (52 yards), as well as King’s 83 rushing yards, helped Miami finish with 337 yards on the ground – second-most since the Hurricanes joined the ACC in 2004 and most since recording 364 at Virginia Tech on 10/23/2014.

“The mission today was that we were going to put the ball on the ground,” Harris said. “We were going to run the ball, as you could see. You saw Jaylan tonight, you saw [Robert] Burns, you saw Don Chaney eating. You saw the whole running back room eating. Once we pound the ball, we’re going to take shots.”

Miami quarterback D’Eriq King put his playmaking ability on display to kick off the Hurricanes’ second possession of the second quarter. The redshirt senior evaded a UAB rusher, spinning and juking before rolling to his left and throwing a dart to Dee Wiggins on the sideline for an 11-yard gain and first down. 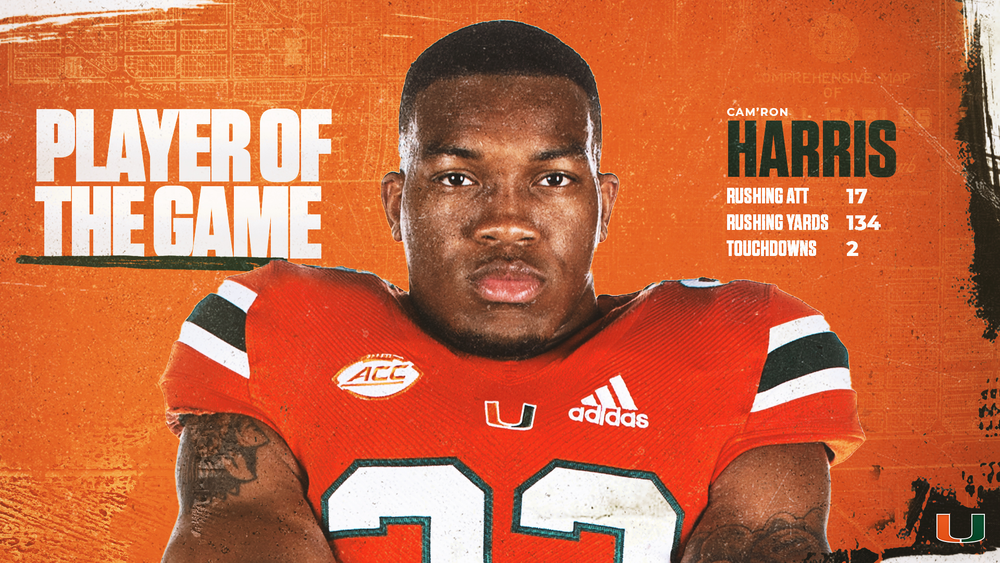 King threw a downfield block that helped Harris burst for a 15-yard run that put the Canes inside the red zone. On the next play, the explosive and elusive QB finished off the drive with an impressive 12-yard scamper for a score and bestowed the new Touchdown Rings – a set of rings that say, “The Crib” in orange and green jewels – to his offensive line for helping clear the way to the end zone.

“Those guys deserve it. I think they’re the reason our team is going to win a lot of games this year,” King said. “They work extremely hard and they don’t get a lot of praise. So, every time we score, I think a skill guy should give the rings to the offensive line because they deserve it.”

The Canes forced a three-and-out on UAB’s next possession, with graduate transfer Quincy Roche recording his first sack as a Cane to force a punt by the Blazers and give Miami the ball on its own 30. Roche’s sack was the 27th of his career and made him FBS’ active career sacks leader. The redshirt senior had four tackles in his Miami debut.

“It’s a huge relief always getting the first one under my belt,” Roche said. “It was a play where I started inside. I believe they messed up on a protection. The tackle fanned out and the guard went down. I just took it.”

King showed off some more of his unique skillset on the opening drive of the second half, evading a UAB pass rusher before sprinting for a 25-yard gain on the ground that pushed the Hurricanes to the UAB 30. The drive ended with a 25-yard Borregales field goal that put Miami up double-digits, 17-7.

“The big thing for us was defending that quarterback,” UAB head coach Bill Clark said. “That’s all I’ve heard, I mean, it’s true; he’s electric. I thought we did a pretty good job on him all night, but what happens when you’ve got zone-read is that that guy can really run. He holds that outside linebacker, our defensive end, and that is where the zone cut back inside us a few times. They were playing with tempo, playing fast and, once again, I thought we did a good job. We were probably just worn down a bit as the game went on. We just had to tackle and that is what we said the whole time coming in. They had some really good running backs and him. Anytime you have a guy that can really throw the ball and run it, it is tough to defend.”

UAB responded with a nine-play, 75-yard scoring drive that ended with a six-yard touchdown run by Spencer Brown that cut Miami’s advantage to three points with 6:19 remaining in the third quarter.

Miami’s ground attack got back to work on the Hurricanes’ next possession, with freshman Donald Chaney Jr. picking up 37 yards on three carries before Harris punched the ball in from four yards out for his second rushing TD of the game and the first multi-touchdown game of his career.

“If that’s not true [that we scored each time after UAB did], it certainly felt like that,” Diaz said. “It felt like every time UAB made a little bit of a run that we countered right back down the field with a touchdown drive. So, one, I think that’s just the ‘play the next play’ mentality that our entire football team has, that either side of the ball can pick up the other side. So, even when we were not moving the ball sometimes in the first half, the defense went out there and just got another three-and-out. I thought that the team ball was really good in that regard.”

“Honestly, I had a lot on my mind tonight. This is my first game in my whole entire life without my dad; he passed in February."

After forcing a UAB punt, the Canes got the tight ends involved as Brevin Jordan caught a pass in the flat and ran for a 25-yard gain to midfield. A finalist for the Mackey Award a year ago, Jordan hauled in a four-yard touchdown from King on the final play of the third quarter to wrap up a seven-play, 75-yard drive that put the Hurricanes on top by 17 points, 31-14. The junior tight end finished with a team-high 51 receiving yards on three receptions.

“Honestly, I had a lot on my mind tonight. This is my first game in my whole entire life without my dad; he passed in February. So, that was on my mind, but I was trying to go out there and just play for him,” King said. “I couldn’t stop thinking about him the whole night, how proud he would be of me and just giving him a hug after the game, calling him after the game and him encouraging me to keep getting better, keep going every single day. But overall, it was good for me to get out there. I haven’t played a college football game in a while, so just going out there and just playing [and] getting a win, that was the biggest thing for me.”

Defensively, the Canes held UAB to just 80 rushing yards and 285 yards of total offense. Redshirt junior Bradley Jennings Jr. led the Hurricanes with a career-high six tackles and two tackles for loss in his first career start. Nesta Jade Silvera added five stops and one TFL, while Amari Carter made five tackles (four solo). Te’Cory Couch had the first forced fumble of his career in the third quarter.

“Definitely playing with Quincy, I felt like I was playing with Greg [Rousseau] in being able to trust the guy next to you that he will do his job,” Silvera said. “BJ [Jennings] didn’t miss a step as you all could see. He was out there whacking people, up there on the top of the team in tackles in his first game back in over a year and a half. That’s a testament to him and also to our training staff in how they worked with him. They are guys that I could go on and on about. We’ve got a defense full of dogs and an offense full of dogs.”

While the atmosphere at Hard Rock Stadium was different due to limited capacity and social distancing protocols, Diaz knows having fans in the stands meant a lot to his team, as well as its supporters.

“I’ve got say, it was great to see the fans that were able to come to the game, come to the game,” Diaz said. “This was the first major sporting event in Dade County since mid-March and just to have that sense of community and have our players see people supporting them and stuff like that again [was great]. This was not promised to us, so we were happy to have the fans we had and thought they did a great job during the game.”

In a sport where momentum is so crucial, Miami’s victory to open the season is something that the Hurricanes will relish and look to build off ahead of a Week 2 contest at Louisville.

“The locker room I just left, I would say everybody feels it was nice to start off with a victory,” Diaz said. “It has been a while since we won a game and we talked all year about respecting how difficult it is to win a game and how hard these guys work. So, to see that locker room was a great reward for everybody in there.”