But what Jarrid Williams didn’t have as he tried to make one of the biggest decisions of his life was the opportunity to see, in person, where he’d play his final season of college football.

“I never took a visit,” Williams said of his surreal recruiting experience. “It was all sight unseen.”

Fortunately, as Williams weighed his options during the COVID-19 pandemic, he had the opportunity to get advice from someone he trusted, someone he knew would offer advice and guidance without pressuring him, someone that understood the magnitude of his decision as a graduate transfer with a limited window of eligibility and time.

It turned out his former teammate at Houston – D’Eriq King, the quarterback he’d protected for two years – had plenty of good things to say about Miami, where he himself had found a new home after transferring just months earlier.

King’s endorsement, the opportunity to play in Rhett Lashlee’s offense and the numerous conversations with Hurricanes offensive line coach Garin Justice proved enough to make Williams feel comfortable Miami would be the best fit for him. 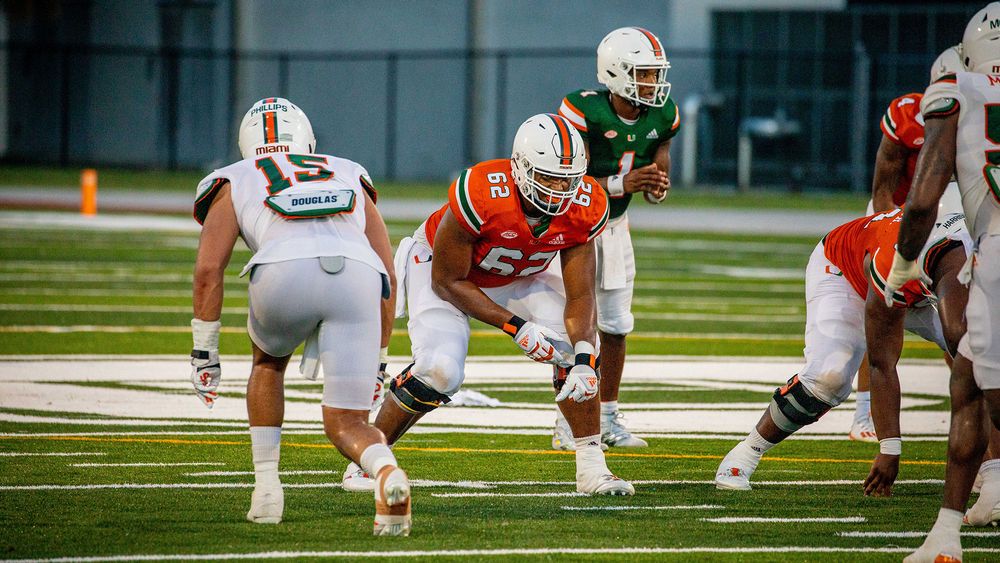 “It was really tough, not being able to visit places,” said Williams, a 6-foot-6, 308-pound offensive tackle who also considered playing at Florida State, USC, Baylor and Mississippi. “But, I knew [at Miami], I would know the offensive style, as far as the system. I knew it would be a smooth transition. I’m used to the tempo. As far as who I was getting coached by and worrying about the defense, I knew here that definitely wasn’t going to be an issue. All of that played a factor. … And I really liked coach Justice. He has a similar technique style to what I was getting from a former coach at Houston. Their teaching styles are similar and I know I respond to that teaching style very well. Those were some of the main things.”

Williams announced his decision to transfer to Miami in June. Then came a whirlwind.

He had to move from his native Texas to South Florida. He had to find a place to live. Enroll in classes. Finally meet his new teammates and coaches in person. Learn a new offense and adapt to playing in Miami’s heat and humidity, which yes, was an adjustment, even after playing in Houston.

Fortunately, he was somewhat familiar with Lashlee’s scheme, having seen it up close when both were at their respective programs in the American Athletic Conference. And with the ankle injury that ended his 2019 season fully healed, Williams began making a quick impression on his new coaches.

“Jarrid is kind of a quiet guy, but he’s got a good sense of humor, a good personality. He’s a guy that’s really started to make a seamless transition as far as into the room. And the room has welcomed him with open arms. We’re real, really happy about that,” Justice said. “As far as on the field, he’s such a long, big person. Right now, we’re still working through some things fundamentally, but he makes up for his mistakes with his sheer size and athletic ability. Once we can marry the fundamentals, schemes and get into playing shape, he can have a really good year.

“I think the biggest transition, even with his injury, is just ‘Hey, you’re going halfway across the country, you’re going to a new school, you’re going to new teammates, a new environment and you’ve got to do it in a short period of time.’ For all those stresses, all those things that are going on, I think he’s handled it pretty well.” 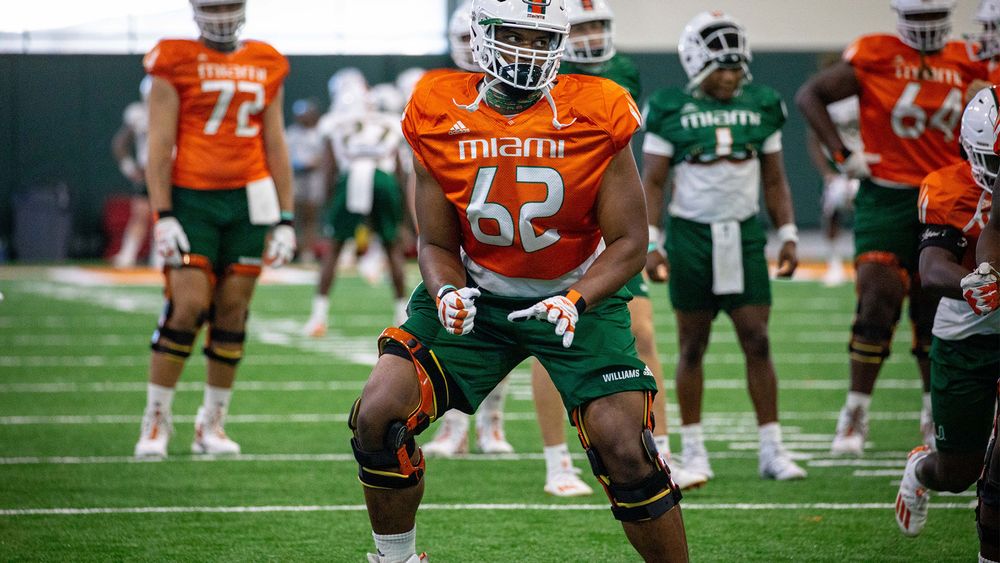 As impressed as teammates and coaches have been with King, the veteran sees plenty of potential in his counterparts along Miami’s offensive line.

A group that was young last fall has grown up significantly and gained invaluable experience. Williams, who is now set to begin his sixth year of college football, says that will be key this fall.

“You had Zion [Nelson], who was a freshman. DJ [Scaife] was a very young offensive lineman. But I know from experience, once you get at least a year under your belt, there’s a difference,” Williams said. “Zion made a big change to his weight, but it’s not just him. Corey Gaynor, DJ Scaife, those guys are great. Honestly, I don’t feel like there’s a worry about any spot on the offensive line. … We all know what we want to accomplish as an offensive line and it’s a very mature group now. There’s not really an issue.”

There is, of course, another factor that makes Williams feel comfortable about his decision: the opportunity to, once again, protect his friend and former quarterback.

Though King has been on campus since January, none of the Hurricanes know him as well as Williams does. No one is as familiar with the quarterback’s speed, mobility and drive to win.

And King is plenty happy to have Williams protecting him again, too.

“With Jarrid, it’s just great having him on my team,” King said. “I’ve been playing with him for four years. Me and him started together for two years, so I feel like I have a pretty good connection. I trust him.”

The connection the two have has Williams excited to see what this season can be, not only for him and King, but for the Hurricanes, too – especially since he believes he and his quarterback both have something to prove as they transition to playing Power 5 football.

“It’s hard to say what he’s not going to do in that offense,” Williams said. “I mean, D’Eriq’s going to be great. He’s a dual-threat quarterback and it’s really hard to stop a dual-threat quarterback. So, I’m not really worried about what’s going on with that because I know he’s going to make the play every time. … I just want to help achieve a goal as far as getting Miami back to where it needs to be. I know we have the potential, most definitely, to get there. We just have to put it all together. I feel like it’ll be good this season. We’re headed in the right direction.”