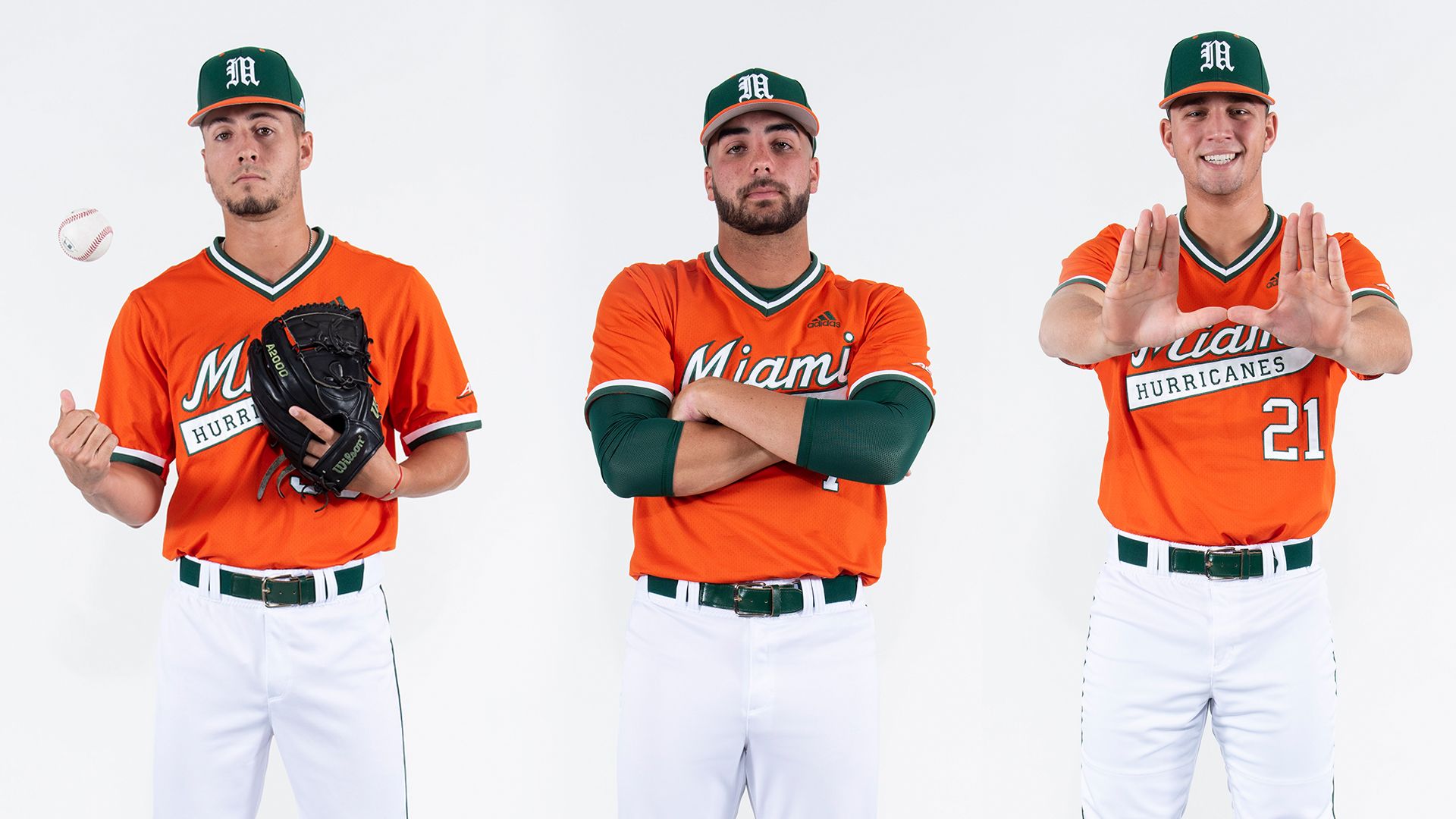 In Greek mythology, Hercules slayed the Hydra – a multi-headed beast – on his way to proving that he was the greatest of Greek heroes.

But there was no Hercules sitting in the opposing dugout at Mark Light Field in 2020, as the Miami Hurricanes featured a “three-headed monster” on the pitcher’s mound that flummoxed visiting lineups every weekend.

Right-handed pitchers Brian Van Belle, Chris McMahon and Slade Cecconi formed arguably the best weekend rotation in America and their numbers lived up to the hype.

The trio combined to go 7-1 with a 1.72 ERA and 106 strikeouts over 73.1 innings pitched in a shortened season, proving day after day and weekend after weekend that opponents were going to have a tough time hitting against the Hurricanes. 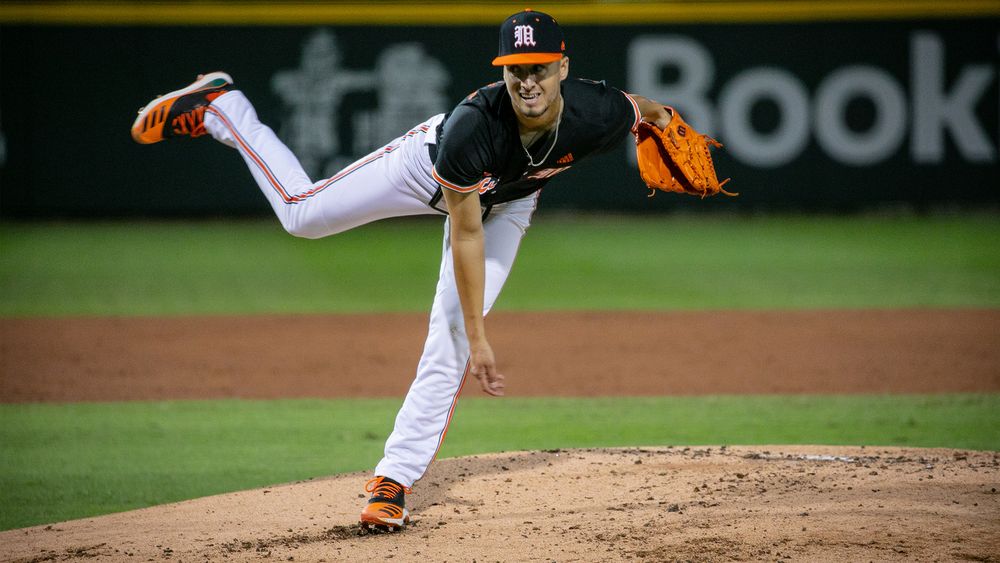 A dominant force every time he took the mound, Van Belle did not allow an earned run over his first 26.1 innings pitched in 2020.

The three Miami starters got a taste of what they could accomplish in 2019, when all three joined Evan McKendry to form a talented and deep pitching quartet that thrived while helping the Canes return to the NCAA postseason. After the 2019 season ended at the Starkville Regional, Van Belle, McMahon and Cecconi immediately began working to improve ahead of their next season as Hurricanes.

“We were pushing each other since the season ended last year,” Van Belle said. “Obviously, Chris, went on to play for Team USA and played some summer ball, and Slade took the summer off and went to Driveline and I stayed down here over the summer and worked out at school and did a throwing program and stuff like that. All of us were doing our own thing to make ourselves the best player we can be and give us the best opportunity to develop and succeed when we got back to school in the fall.”

Fall ball led to an internal competition with all three starters vying for the coveted Friday night role. All three of Miami’s aces wanted to earn the top spot in their team’s rotation and that helped them all elevate their game to unprecedented levels.

“There were talks throughout the team throughout the fall about ‘the weekend rotation is going to be this or that’ and none of us really knew,” Van Belle said. “But for us three, we were all rooting for each other. When you’re playing for a big school like Miami, you can’t be selfish and you can’t worry about yourself and your own statistics and your own success. You’ve got to do what’s best for the team. We all pretty much got on each other and held everyone accountable. If we saw somebody doing something the wrong way, we would tell them. If somebody was running late or they were wearing the wrong uniform for practice, we were just all there for each other and we were just pushing each other to the fullest and trying to exceed our limits, especially from a strength and conditioning standpoint.”

“Obviously everyone wanted to be the Friday night guy and get the Friday night nod, but we all knew at the end of the day we were going to win a lot of ballgames and win a lot of series with the three guys we had,” McMahon said. “I think we kind of just accepted what we had, accepted our role and kind of attacked it that way as if it doesn’t really matter when we pitched. We were just trying to win ballgames.

“We wanted to get to Omaha, “McMahon continued. “And with the three guys we had coming at you in the weekend rotation, I think we definitely could have done that.” 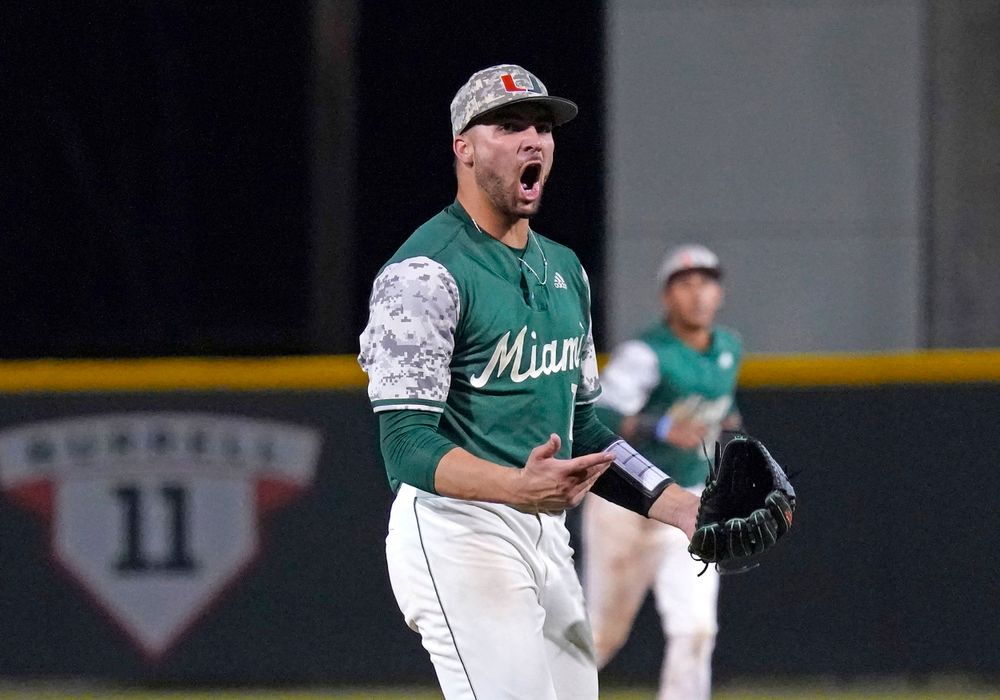 McMahon led the Canes with three wins and tied with Brian Van Belle with a team-best 38 strikeouts while walking just five.

Just days before the 2020 season began, head coach Gino DiMare announced the weekend rotation and the secret was out. Teams would face Van Belle, McMahon and Cecconi every weekend, a daunting task, to say the least.

“Being named the Friday starter tells you a lot,” DiMare said ahead of the 2020 season. “The two other guys are first-round-type guys in McMahon and Cecconi; they have first-round-type stuff. Brian is not that kind of guy that is a 95,96,97 miles-an-hour guy, but Brian can pitch and he’s a competitor and he’s tough. That’s the guy you want on that Friday night in the ACC. He’s going to be pitching against a lot of first rounders and he’s the perfect guy for that.”

It’s well known that Miami’s rotation was among the best in the country, but Van Belle believes their success on the mound goes beyond physical ability. It takes a lot more than natural talent to be successful, especially at a high-profile program like Miami.

The trio of starting pitchers was always competing with each other and pushing one another to do better. They all benefitted from that internal competition, as well as the consistently high-level of play they were exposed to on a daily basis in practice and playing in one of the top conferences in the country.

“Playing in ACC helps a lot. It’s a great conference, especially for college baseball, it’s probably a top-three conference around the country, if not top two,” McMahon said. “Week in and week out, every single weekend, you’re going to get good ball players around the entire country and I just raised my game throughout the three years. And obviously facing the kids on the team at Miami when we’re intrasquading in the fall [helped a lot]. We had a pretty good squad this year and having to compete against them during the fall and having to go against them helped me a lot.” 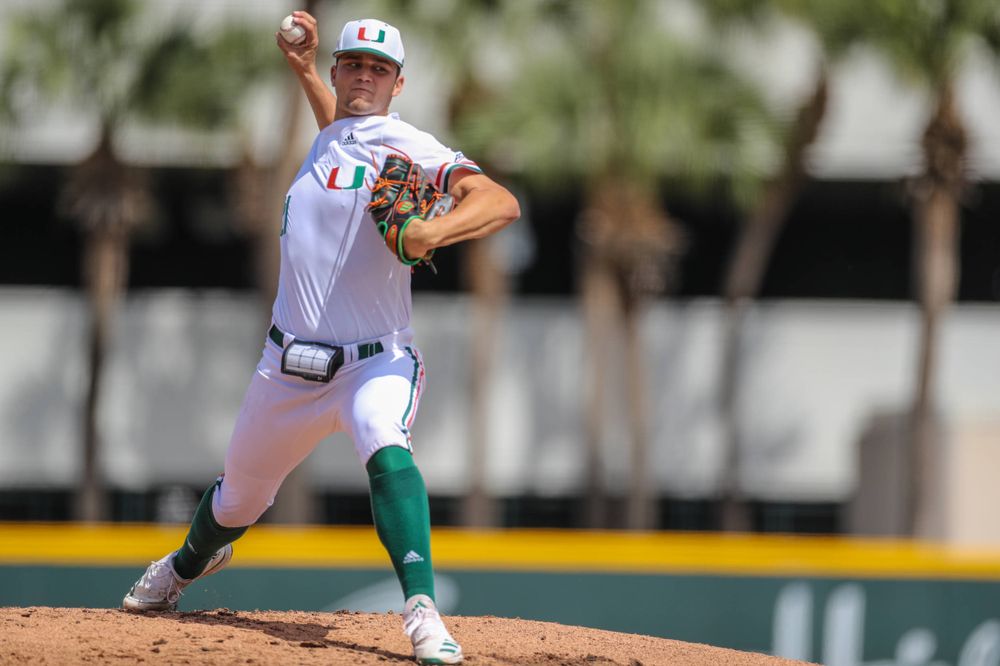 Cecconi, who was selected 33rd overall by Arizona, is the 29th Hurricane to be taken in the first round of an MLB Draft.

With a strong, confident mindset and an abundance of pitching ability, Miami’s trio of hurlers accomplished a lot in just a few turns through the rotation. Van Belle and McMahon were named Second Team All-Americans in 2020, while Cecconi headlined the “three-headed monster” in the MLB Draft with his 33rd overall selection by the Colorado Rockies.

“It’s definitely one of the most talented groups we’ve had. It would have been a fun year,” Miami pitching coach J.D. Arteaga said. “It would have been fun to see how the staff this year would have matched up with some of those from 2013 and ’14 if they had a full season.”

Miami’s pitching staffs from 2013 and 2014 featured former ACC Pitcher of the Year Chris Diaz leading the way, while former All-American Bryan Radiziewski and current San Francisco Giants pitcher Andy Suarez rounded out the weekend rotation. Add in Javi Salas, who was also one of the top pitchers in the ACC and tossed a perfect game at Miami, and calling those Hurricanes’ starters “formidable” would be selling them very, very short.

But Arteaga, who has spent 18 seasons overseeing Miami’s pitchers, is confident his 2020 crop of starters could have matched up with any of the great rotations around the country, as well as in Miami history.

“This group this year was the most talented, by far, since we had Chris Diaz on Friday night, Radziewski Saturday, Suarez on Sunday and Javi Salas in the midweek,” Arteaga said. “For back-to-back years, we had those four guys that I don’t think missed a single turn in the rotation. That was a great rotation there and all four got drafted in the top 10 rounds. I think this year, had there been 10 rounds, a guy like Van Belle would have gone in the top 10 rounds. Those were four great starters and this year we had three, with two of those guys being a first rounder and a second rounder.” 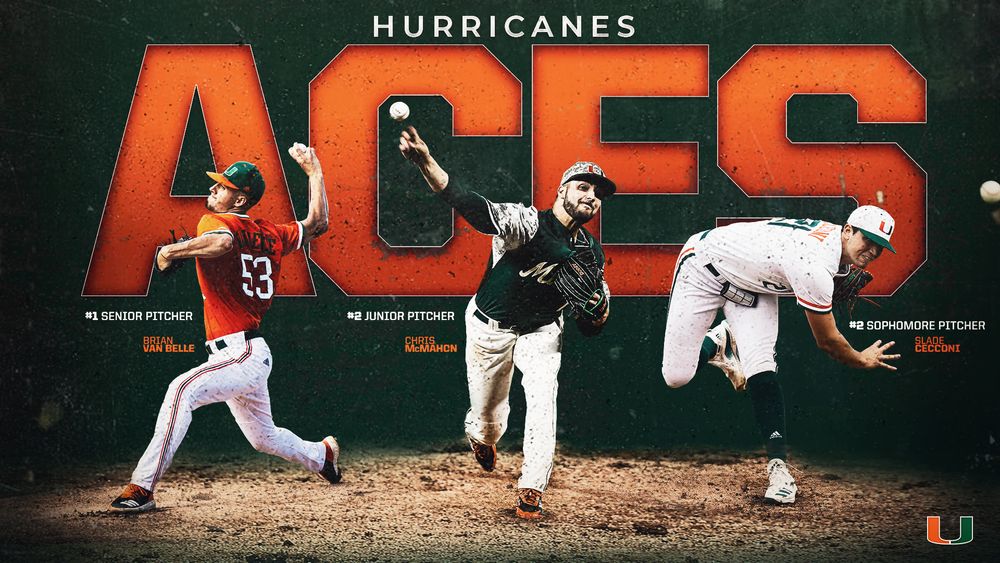 D1 Baseball rated each of Miami's starters among the best in the country for their respective class.

Miami’s dynamic 2020 pitching rotation never got the chance to fulfill its goal of winning a national championship, as the COVID-19 pandemic cut their final season short. Van Belle, McMahon and Cecconi all signed professional contracts, but they plan to be around the program a lot and look forward to mentoring younger players like the ProCanes did for them while they were in school.

“Miami is a special place,” Cecconi said. “Having the facilities there and having a support staff like that where everyone there is rooting for you and everyone there wants to see you succeed, whether it’s on the field or off the field. There’s no better atmosphere to have shaped me in these two years between high school and pro ball.”

“Me and Slade both loved our time down at Miami and all of our teammates, our coaches, everything was a great opportunity,” McMahon said. “It was a great experience for me to travel down there and experience Miami for three years. You see the alumni come back and work out. You see the way they work and they talk to the players and I plan to do the same. Just kind of always go back, talk to the people that I really love. The game of baseball brought me a lot and that includes the opportunity to be a Miami Hurricane. I am grateful for that and I am thankful for everything Miami did for me in helping me grow as a player and person.”