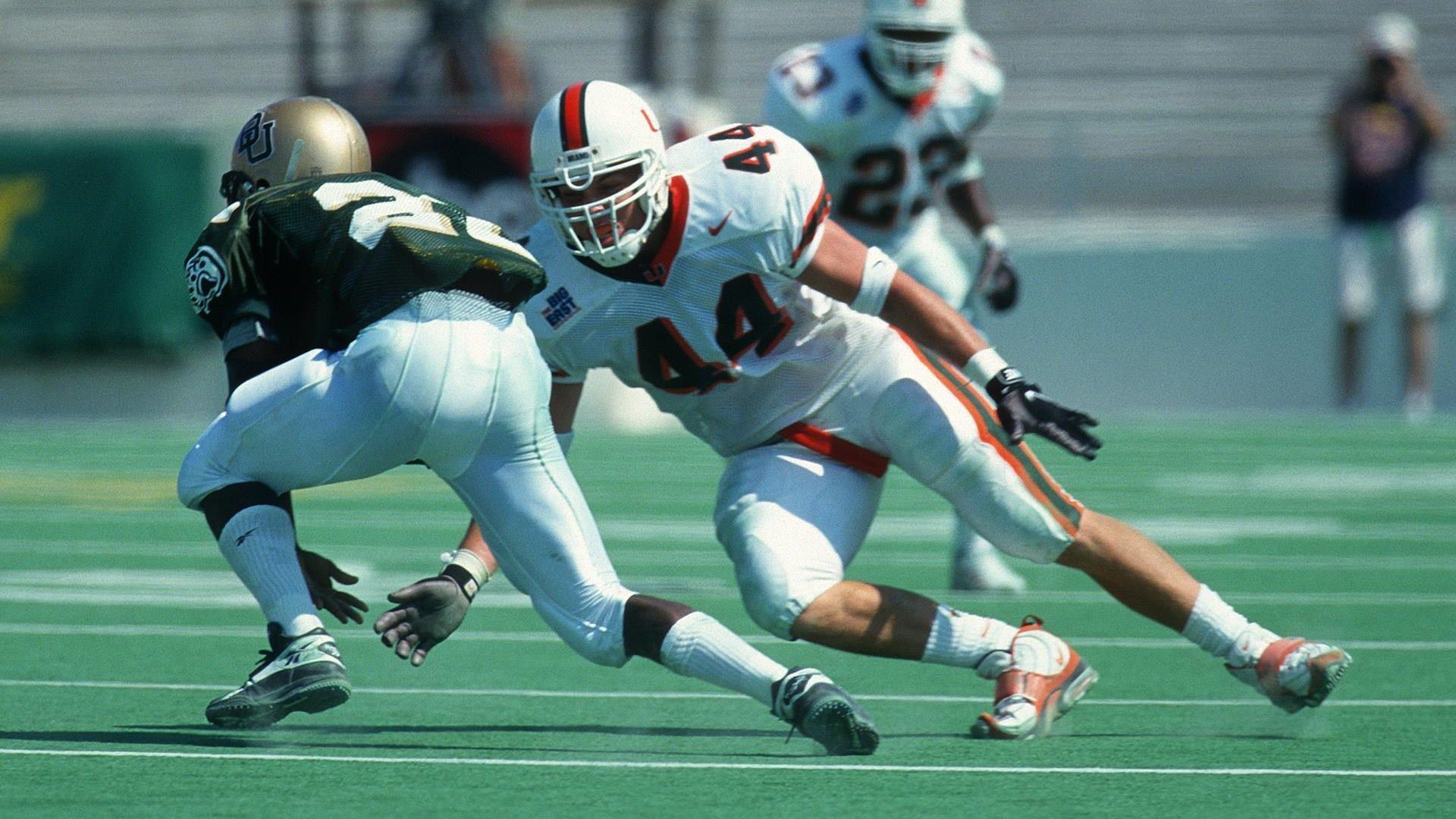 Three UM football legends have their names on the 2021 ballot for induction into the College Football Hall of Fame, the National Football Foundation announced Tuesday.

CORAL GABLES, Fla. – Three University of Miami football legends have their names on the 2021 ballot for induction into the College Football Hall of Fame, the National Football Foundation (NFF) announced Tuesday.

Quarterback Ken Dorsey and linebacker greats Ray Lewis and Dan Morgan are among the 78 players and seven coaches from FBS included on the ballot.

The winningest quarterback in Miami history, Dorsey led the Hurricanes to a 38-2 record in his career as starting signal caller. Dorsey set school and BIG EAST records in several categories during his time at The U, including career touchdown passes (86) and career passing yards (9,565). A Heisman Trophy finalist in his last two seasons, Dorsey was named the 2001 Maxwell Award winner as the nation’s top offensive player after leading the Hurricanes to the program’s fifth national championship in 2001, when he also won BIG EAST Co-Offensive Player of the Year.

Lewis earned All-BIG EAST recognition in 1994 and 1995, compiling one of the most dominant careers ever by a linebacker at The U. Lewis, who ranks sixth all-time at Miami with 388 career tackles, has the two most prolific seasons in history to his name, having recorded 160 total tackles in 1995 and 152 in 1994. A two-time Super Bowl champion and 13-time NFL Pro Bowler, Lewis was drafted in the first round by Baltimore in 1995 and played all 17 seasons with the Ravens, compiling more than 2,000 career tackles.

Miami’s leading tackler in three of his four seasons, Morgan was named 2000 BIG EAST Defensive Player of the Year and set the Miami standard with 532 career tackles over a sparkling career. Morgan became the first player in college football history to sweep the three major defensive awards (Butkus Award, Bednarik Award, Nagurski Trophy) and was a unanimous first-team All-American in his final year. He was selected in the first round of the 2001 NFL Draft by Carolina and was a 2004 Pro Bowl selection.

The ballot will be emailed the week of June 16 to the more than 12,000 NFF members and current Hall of Famers whose votes will be tabulated and submitted to the NFF’s Honors Courts, which deliberate and select the class.

The announcement of the 2021 College Football Hall of Fame Class Presented by ETT will be made in early 2021, with specific details to be announced in the future. The class will be officially inducted during the 64th NFF Annual Awards Dinner Presented by ETT on Dec. 7, 2021, at the New York Hilton Midtown. The inductees will be permanently enshrined at the Chick-fil-A College Football Hall of Fame in Atlanta.

Of the 5.4 million individuals who have played college football since Princeton first battled Rutgers on Nov. 6, 1869, only 1,027 players have earned induction into the College Football Hall of Fame, or less than two one-hundredths of a percent (.02%) of those who have played the game during the past 150 years. From the coaching ranks, 221 individuals have achieved Hall of Fame distinction.