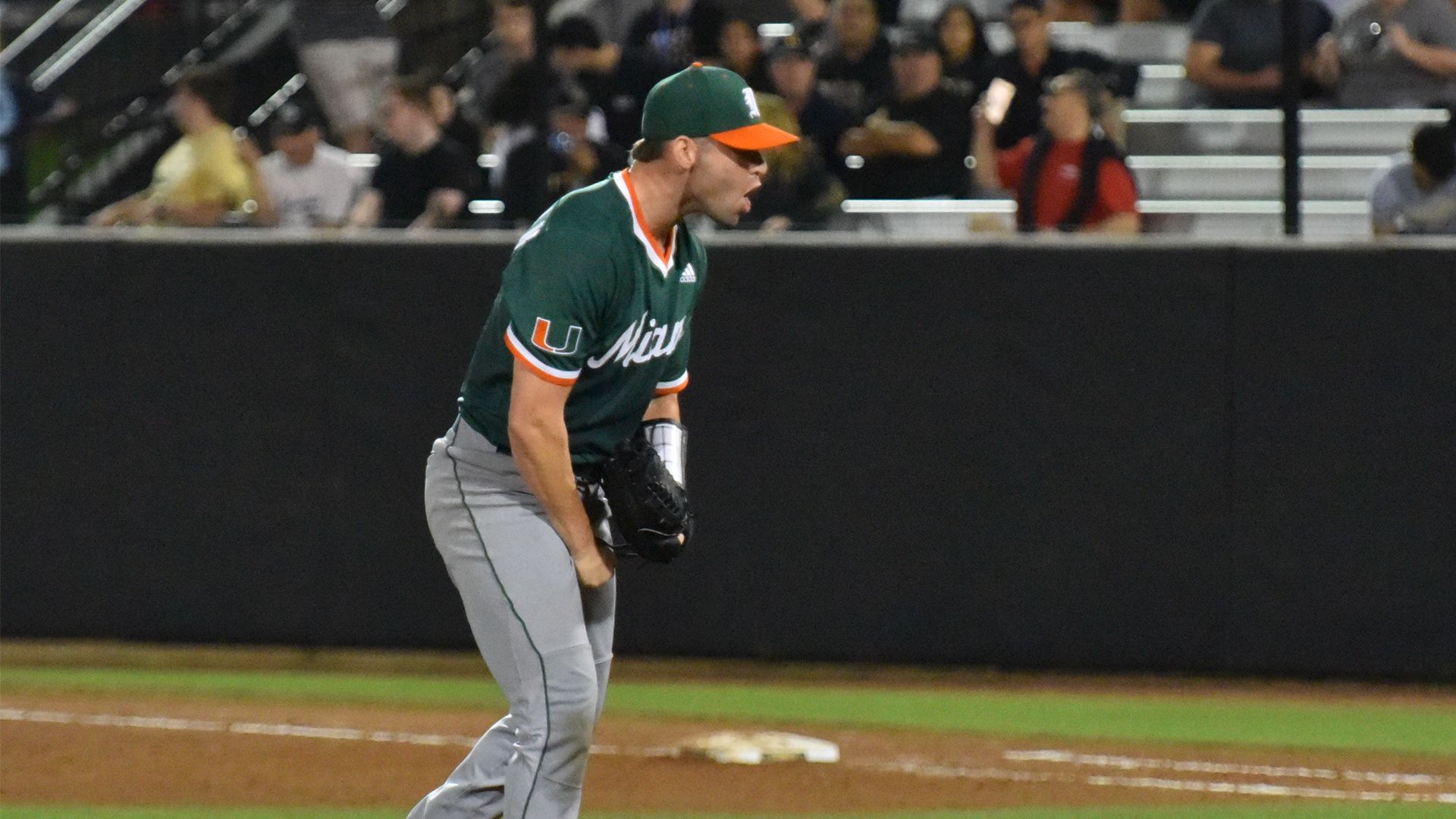 ORLANDO, Fla. – The seventh-ranked Miami Hurricanes picked up a top-15 win on the road Wednesday, beating No. 12 UCF, 3-2.

“It’s a big win on the road against a ranked team,” Miami head coach Gino DiMare said. “UCF is a very good program. Coach [Greg] Lovelady does a great job. He’s a former player of ours. … We’re going to have to have team efforts if we’re going to win games like this, a one-run game, a close game.”

Miami wasted little time getting on the scoreboard on Wednesday, mounting a two-out rally against UCF starter Jaylyn Whitehead. Adrian Del Castillo battled back from an 0-2 count to work a walk and the sophomore scored from first on a bullet hit to the right field corner by Alex Toral for an RBI double.

UCF threatened in the bottom of the fourth, putting two on with two outs against Miami starter Alex McFarlane. DiMare turned to the bullpen and JP Gates struck out leadoff man Gephry Peña to squash the threat and keep the Canes ahead by a run.

“Certainly, our pitching was outstanding,” DiMare said. “I mean McFarlane is a young guy. he’s raw with a lot of upside and ability, but he battled through it. He had the four walks, but he still battle through and our bullpen was outstanding.”

The Hurricanes added on in the sixth against reliever Jack Sinclair. Toral opened the inning with a walk and Raymond Gil followed with a two-run bomb that landed well beyond the left field fence and put Miami head, 3-0.

“It’s huge and it helped us get the W tonight,” Gil said. “I haven’t really done much this year. Obviously I have been struggling, but I come out every day trying to do what I can for the team and try to do something productive for us. Hitting that homer really felt good.”

The Knights, who had runners on in each of the first four innings, finally got on the scoreboard in the bottom of the seventh. Noah Orlando led off the inning with a line drive double to center and came around to score two batters later on an RBI groundout by Peña.

DiMare called to his bullpen again and Tyler Keysor replaced Gates on the bump after three strong innings by the sophomore lefty. Keysor stopped the momentum in the seventh, throwing a 95 miles-per-hour fastball past Jordan Rathbone to leave Miami ahead by two runs.

UCF continued to claw at Miami’s lead, cutting it to one in the bottom of the eighth. Catcher Ben McCabe led off the inning with a base hit. Pinch runner Trent Taylor stole second and scored on a two-out bloop single to right that cut the Hurricanes’ advantage to 3-2.

The Canes turned to Daniel Federman to close out the game and the junior right-hander struck out Dalton Wingo to retire the side in order and secure his third save of the season.

“it’s big because it’s on the road and against a ranked team, but we feel like every game we play is the biggest game of the year. This is definitely a big one. They’re a great team and we beat them at their place.”

Miami will continue its road trip this weekend with a three-game series at Virginia Tech. The Hurricanes and the Hokies will open the series on Friday at 4 p.m.