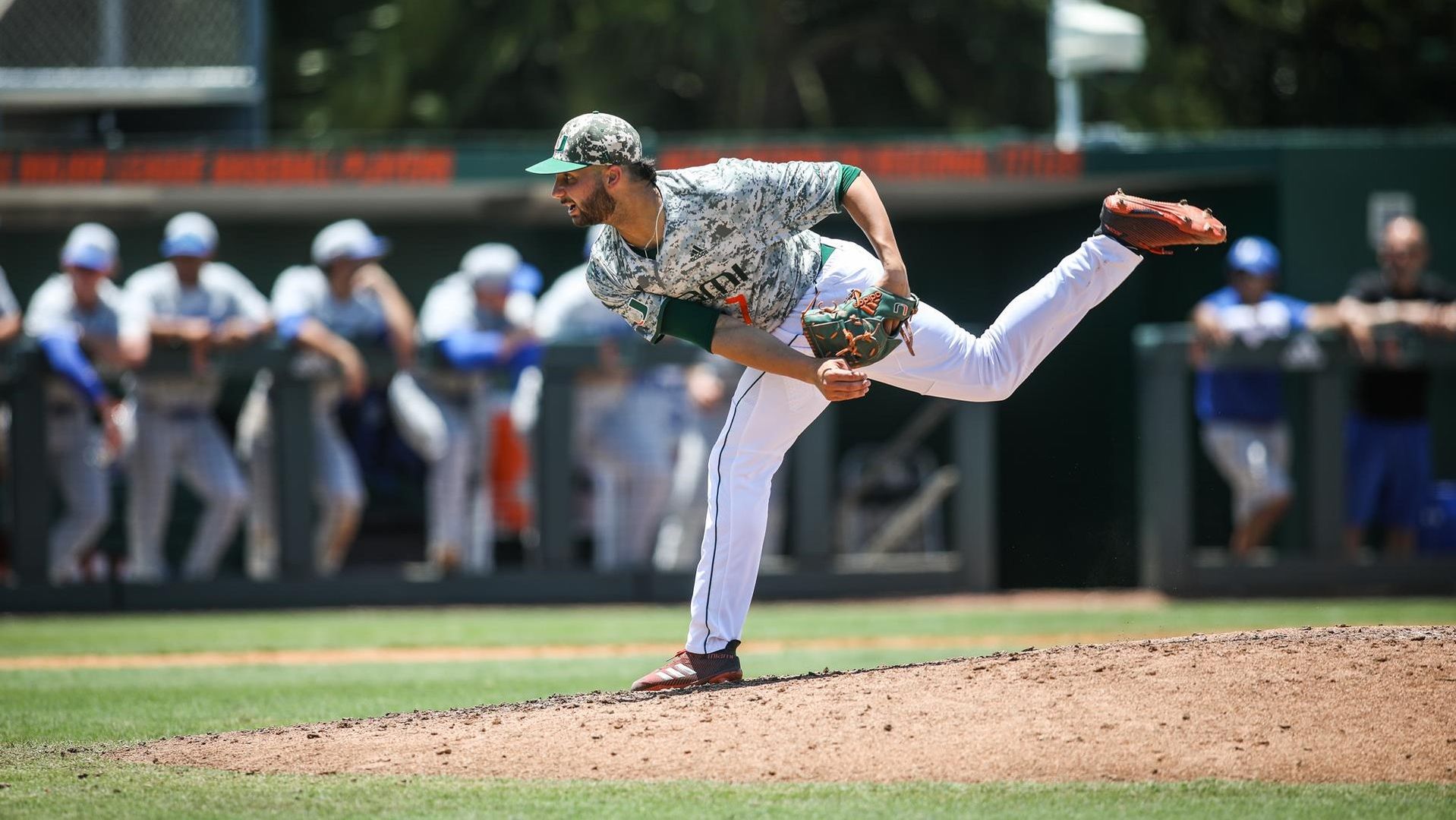 CORAL GABLES, Fla. – The Miami Hurricanes closed out the regular season with a victory over Duke, 5-1, to clinch a top 4 seed in next week’s ACC tournament.

The Canes (38-17, 18-12 ACC) secured their seventh ACC series of the year thanks to a strong start by sophomore Chris McMahon and a hot start by the Miami bats that put Duke (30-24, 15-15 ACC) in a deficit from the opening inning.

“I’m happy we got the series win,” head coach Gino DiMare. “Good way to finish the regular season and Chris set the tone. Chris McMahon looked really, really good and that was good to see and he threw exactly if I’m not mistaken 60 pitches, which was beautiful. That’s what his pitch count was. It couldn’t be any more perfect than that. Five innings, 60 pitches. That’s 12 pitches an inning, which is great, and the guys that came in out of the pen did an excellent job.”

McMahon (3-2) was outstanding on Saturday, allowing just one hit and striking out six over five scoreless innings to earn his first win since April 6. The sophomore right-hander has allowed just one run on four hits over 7.2 innings since he returned from injury on Monday, May 13.

“It was a hot one, so it actually kind of helped me stay loose and the fastball felt good today,” McMahon said. “I was just attacking with the fastball and watching their swings and at-bats over the first two games and taking mental notes on that and attacking them today.”

Miami scored three runs in a wild bottom of the first, as Raymond Gil came to the plate with runners on first and third and delivered an RBI single to right that drove in Jordan Lala from third. Adrian Del Castillo went first to third and scored on a throwing error by shortstop Ethan Murray, while Gil advanced to second after an obstruction call on first baseman Chris Crabtree. JP Gates followed with a ground-rule double to right that pushed home Gil and gave the Hurricanes a three-run advantage.

The Canes added a run in the bottom of the fourth, as Freddy Zamora hit an RBI single to right that sent home Lala and gave Miami a 4-0 lead.

Miami’s offense continued to do damage against Duke pitching, as Chad Crosbie stole second and advanced to third on a throwing error by catcher Michael Rothenberg before Lala hit a screamer past Crabtree at first for a one-out RBI single that gave the Hurricanes a 5-0 advantage.

Duke finally got on the scoreboard in the top of the eighth, getting two runners on with two outs against reliever Tyler Keysor. Joey Loperfido stole third and scored when catcher Michael Amditis threw the ball away trying to back-pick Kennie Taylor at first.

Keysor hit Matt Mervis with a pitch to put Blue Devils on first and second again before being relieved by Daniel Federman, who got Murray to hit an inning-ending fielder’s choice to short that stranded a pair of Duke runners and kept Miami ahead by four.

Federman tossed a scoreless ninth to wrap up Miami’s 38th win of the regular season, the most since winning 43 games in the 2016 regular season.

The Hurricanes return to action next week at the 2019 ACC Tournament in Durham, N.C., scheduled to run from Tuesday, May 21 through Sunday, May 26.