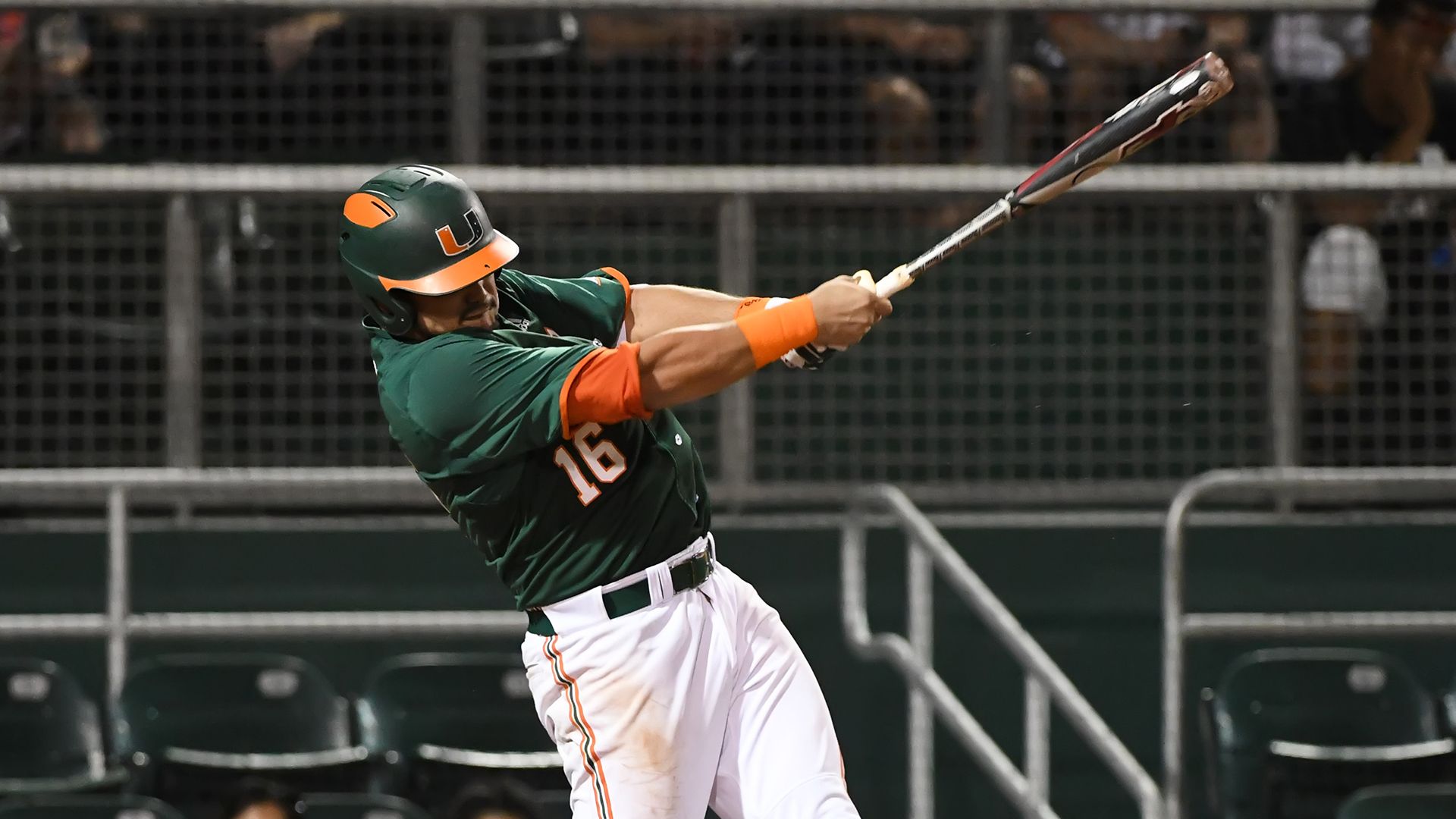 WINSTON-SALEM, N.C. – Raymond Gil and Michael Amditis both had career days at the plate to power No. 19 Miami past Wake Forest, 7-3.

Gil had a career-high five-hit game and Amditis added a career-best four hits, providing thump in the middle of a Miami lineup that finished with 15 hits as the Hurricanes (35-15, 15-10 ACC) took the series opener from the Demon Deacons (28-21, 12-13 ACC) inside David F. Couch Ballpark.

Miami wasted no time getting its offense going, as Jordan Lala led off the game with a walk and stole second before scoring on a two-out double down the right field line by Gil that gave the Hurricanes a 1-0 advantage against Wake Forest ace Colin Peluse.

“I felt good and the hits were just falling today,” Gil said. “That’s baseball. We really swung it well today and played a good game on both sides of the ball.”

The Demon Deacons answered in the bottom of the first, as Patrick Frick doubled to left and scored on a bloop single to left by Bobby Seymour that evened the game at 1.

The Canes charged back in the top of the fourth, with Gil leading off the inning with his second hit of the evening. JP Gates crushed the first pitch he saw from Peluse for a ground-rule double to center and both Canes scored on a two-run single by Amditis that put Miami back on top, 3-1.

“I’ve been progressing over the course of the season,” Amditis said. “I’m seeing the ball well and I’m feeling comfortable in the box again. With my injuries, it finally feels good to be playing for this long again and feeling comfortable.”

Wake Forest responded once again, with Brendan Tinsman hitting a two-out double to right and Bruce Steel following with an RBI triple off the wall in right that cut the Hurricane lead to one, 3-2.

The Hurricane bats kept going in the sixth, with Gil leading off the inning with his second double of the night and scoring on Amditis’ double down the left field line to make it 4-2.

“Our goal every game is to have a complete game,” Amditis said. “That’s been our goal all year and that’s exactly what we did tonight.”

Wake Forest brought in lefty Bobby Hearn to face Chad Crosbie with one out and runners at the corners and the junior outfielder, who entered the game in the top of the second for Gabe Rivera, drove in Amditis with a sacrifice fly to center that gave the Hurricanes a three-run lead.

“We’re not done yet,” Amditis said. “We have a lot to show and our team is getting where we want to be but we’re not at that point yet. I am excited to see what we have in store.”

Van Belle was excellent for the Hurricanes, limiting one of the top hitting teams in the ACC to just two runs on five hits over 6.2 innings.

“If you look back to a year ago, I wasn’t even pitching at this time at my junior college,” Van Belle said. “We made it to that state tournament for Florida JUCOs and I just had to watch the team play because I was unable to play. A year ago, there were games that I was getting hit around by JUCO teams. The Florida JUCO skill level is very high, but I looked forward to being here and I knew I had a lot of work to do to pitch against ACC teams. It’s been surreal this whole year. I’ve just tried to take it week-by-week and just be consistent.”

The redshirt junior used his change-up to keep Wake Forest’s hitters off-balance before turning the ball over to Daniel Federman with two outs and a runner on first in the bottom of the seventh.

“He’s got moxie,” head coach Gino DiMare said of Van Belle. “He’s very confident. Basically, he won the No. 3 spot over some good pitchers on our staff and that allowed [Greg] Veliz to go to the pen and Fed to go to the pen. He earned the right to be there and everybody agreed with it. He’s really maybe surprised a lot of us because he’s a guy that had been hurt out of high school and in JUCO. He hadn’t been fully healthy until now and you couldn’t be happier for the guy.”

Federman ran into trouble in the eighth, loading the bases before being replaced by Gregory Veliz with the bases loaded and one out. The junior fireballer walked Tinsman on a full count before striking out Steel and pinch hitter DJ Poteet to end the inning and leave three Deacons on the basepaths.

The Canes added on in their final turn to the plate, with Gil smacking his fifth hit of the night to become the first Hurricane with five hits since George Iskenderian had five hits against FAU on June 12, 2015.

“He didn’t play all fall with a hand injury, as a matter of fact he didn’t start opening night,” DiMare said of Gil. “He got hit in the eye a couple weeks ago at practice and he got hit by a ball yesterday in practice. He’s been banged up but he’s fought through it and played through it and he’s having a great year for us.”

Alex Toral, who had three hits on Friday, came through with a two-run single with the bases loaded that gave Miami a four-run lead heading into the bottom of the ninth and Veliz shut the door to earn his eighth save of the year.

“It’s a big game and a tough place to play,” DiMare said. “They play good here. This is an offensive park the suits their players and I thought it was a great team win overall.”