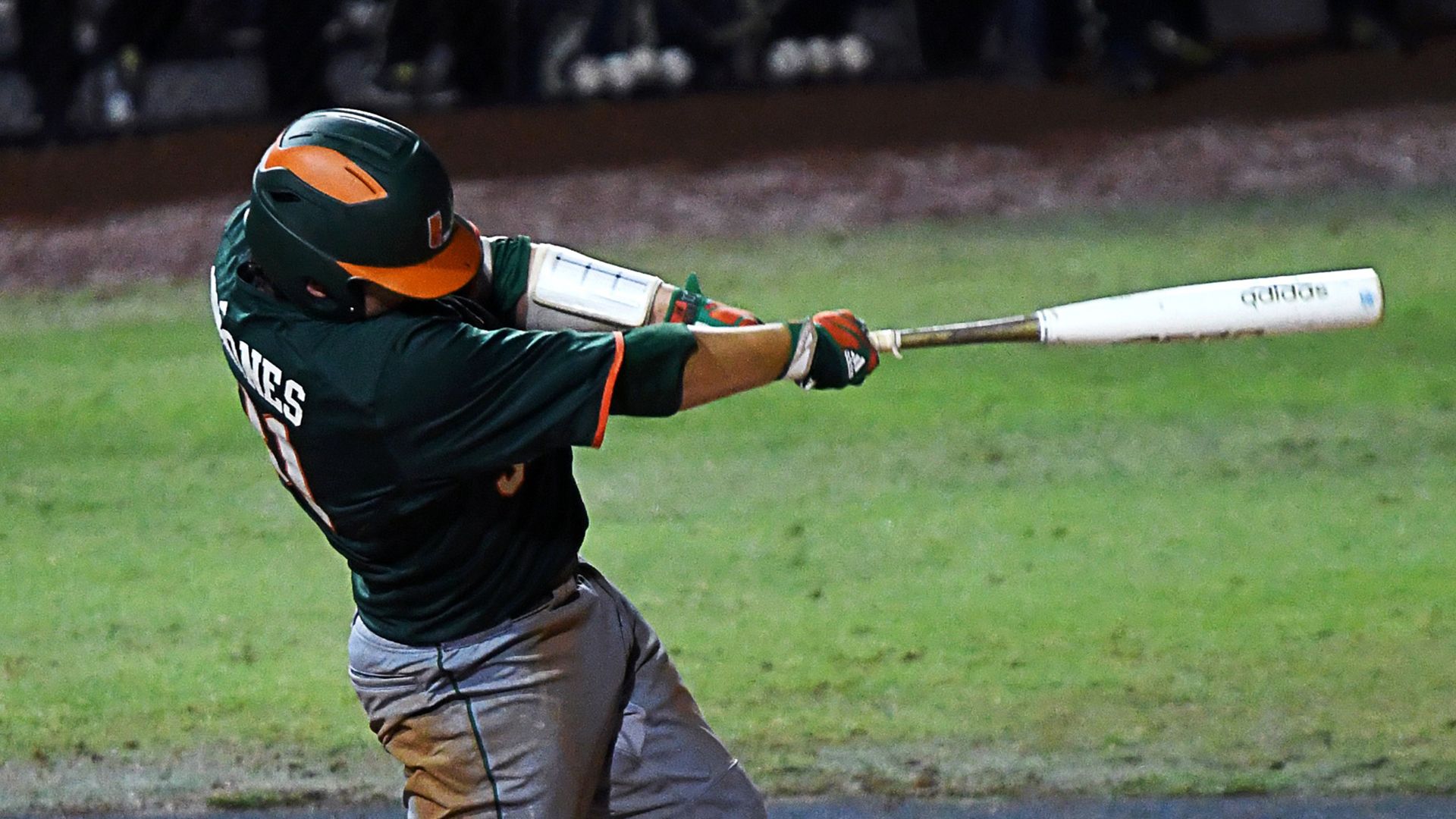 CORAL GABLES, Fla. – The Miami Hurricanes made a late charge but fell one run shy of completing their comeback, falling to UCF 8-7.

The UCF (31-19) victory did not come easy, as Miami (34-15) charged back from an 8-1 deficit to score six runs over the final two innings inside Alex Rodriguez Park at Mark Light Field.

“Certainly happy to with us fighting back making it a game,” head coach Gino DiMare said. “Disappointed that we made a lot of mistakes that end up costing us a one-run game you know it’s eight to one you’re making mistakes you’re not really thinking all sudden boom, it’s a one-run game.”

The rally began in eighth, as Willy Escala bunted for a base hit and moved to second on an error. Jordan Lala followed with a walk and gave the Canes two on with no outs.

Reliever David Litchfield, who tossed a scoreless seventh, struck out Anthony Vilar before former Miami national championship catcher and current UCF head coach Greg Lovelady turned to right-hander Brandon Westberg. The new pitcher entered with a 1-0 count to Adrian Del Castillo, who drove in his team-leading 60thRBI of the season with a solo homer in the bottom of the first.

Westberg retired Del Castillo but was not as fortunate against Raymond Gil and JP Gates, giving up a three-run homer and a solo shot on consecutive pitches to bring Miami within three, 8-5.

After Bailey Mantilla retired the side in order in the ninth, Miami’s got right back to work in the bottom of the inning against UCF closer Kyle Kemp.

Alex Toral led off the inning with a single and two batters later Isaac Quiñones hit a pinch-hit two run homer deep to left field to bring the Hurricanes within one.

“We got a leadoff guy on in the eighth and we scored four runs and we got a leadoff guy in the ninth and we scored two runs,” DiMare said. “Those were big home runs. It was great to see Quiñones get that. He has not had a lot of opportunities to swing the bat and to come in and do that it’s pretty impressive and I’m sure you know all his teammates are very happy for him because everybody pulls for that guy.”

The 2018 Freshman All-American, who entered Saturday’s game just 2-for-12, delivered when his team needed him most and put a jolt into the Miami dugout.

“It was just a great feeling,” Quiñones said. “I was just trying to get the whole dugout into the game. It was an 8-1 game and a seven-run deficit and we were finally back in the game, so it was a good feeling to do that.”

Lala followed with a single and Del Castillo worked a two-out walk to put the go-ahead run on base. Lovelady turned to his bullpen again, calling for right-hander Jack Sinclair to face the dangerous Gil.

The right-hander threw a wild pitch, allowing the tying run to advance to third and putting the winning run in scoring position, but he got Gil to swing through a full-count fastball to end the game and snap Miami’s season-long seven-game winning streak. The Canes finished the season 10-3 in midweek games, improving significantly from 3-8 in midweek games a year ago.

Things got off to a promising start for Miami, as Del Castillo gave the Hurricanes an early lead with a two-out solo homer in the bottom of the first against UCF ace Grant Schuermann. The freshman’s seventh homer of the year also marked his 60thRBI, surpassing Zack Collins for the most by a Hurricane since 2016.

Redshirt sophomore Albert Maury Jr. made his first career start and excelled on the mound for Miami, allowing just two hits and striking out two over three scoreless innings.

“Maury threw excellent,” DiMare said. “It was the best I think I’ve seen him throw in a while, which was great. The tone of the game got set good.”

The Knights finally got something going in the fifth, loading the bases against reliever Mark Mixon before Ray Alejo hit a two-run double to left center that put UCF ahead, 2-1. The Knights added four more runs in the inning capped by a two-run homer to left by Tyler Osik that gave UCF a five-run advantage.

“Never like losing at all but I did tell the guys I’m proud of them for fighting,” DiMare said. “At the end of the day they scored six runs in one inning and you can’t do that, give up a big inning like that.”

UCF tacked on two more runs with two outs in the top of the seventh against lefty Jeremy Cook. Dalton Wingo hit an RBI single to center with runners at the corners that drove in Matthew Mika and Lala misplayed the ball as he tried to scoop it up, allowing Osik to score and Wingo to advance to second.

With the Knights having the weekend off, Lovelady had the luxury of using his weekend starters against the Hurricanes and it paid off. Schuerrmann allowed just one run in his three innings of work before turning the ball over to Chris Williams. Typically the UCF Saturday starter, Williams allowed just two hits over three scoreless innings and earned the win.

“I’m upset right now and nobody should be happy when you lose period but it’ll be over with by tomorrow and we’ll move on and be ready for Wake Forest,” DiMare said. “We know these next two series are huge and we’ve got to play well in the ACC. Tonight didn’t end our season. It’s disappointing because we lost and, of course, we had a chance there at the end. Now we turn the page and move on. This is baseball. We’ve got to get ready to play in two days so we’ve got to be ready for Wake Forest.”

The Hurricanes’ final road trip is scheduled for May 10-13 at Wake Forest and Miami will close out the regular season with a home series against Duke (May 16-18).