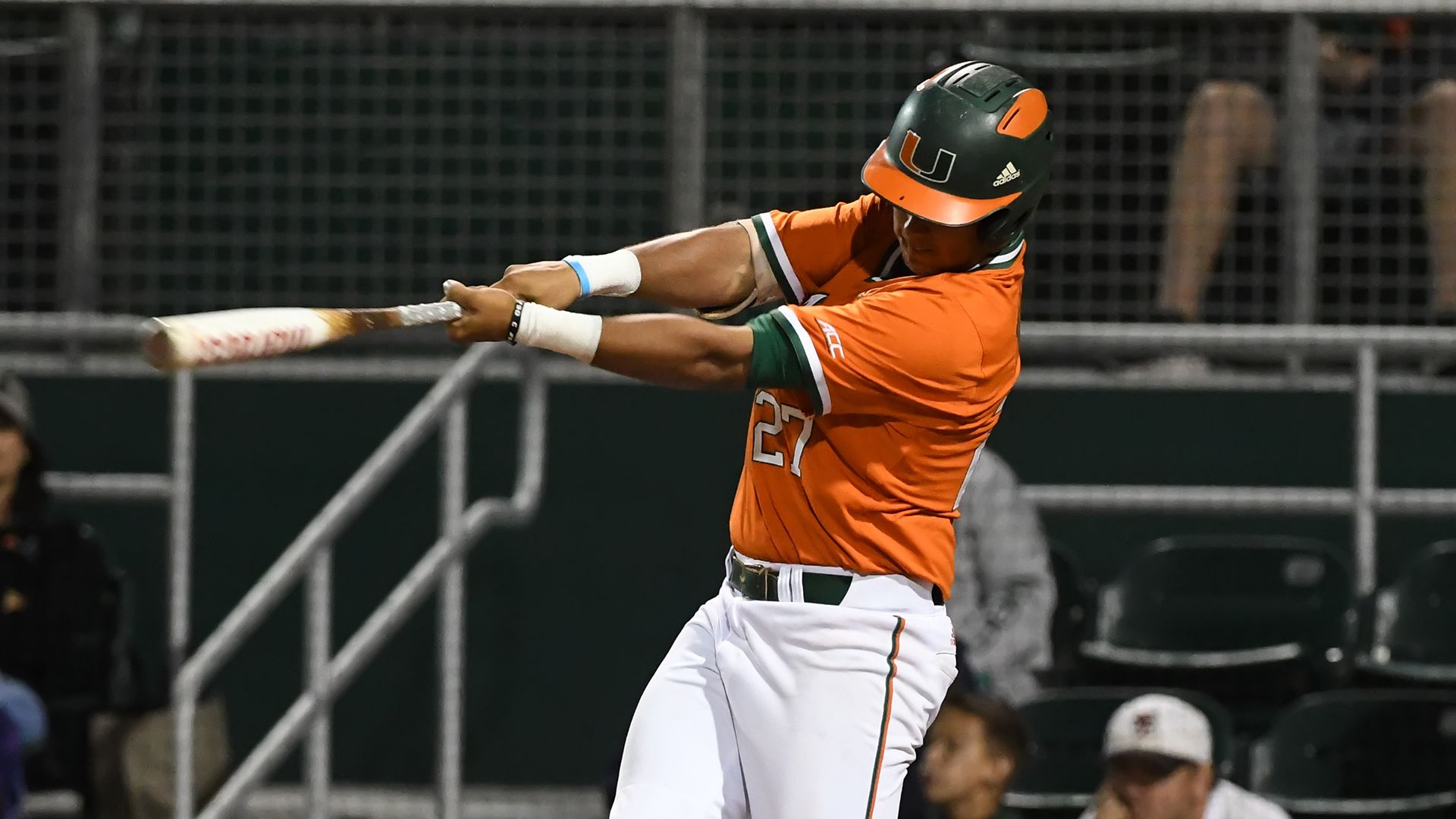 CORAL GABLES, Fla. – A pair of freshmen delivered when their team needed them most, as Jordan Lala and Anthony Vilar drove in five runs to help No. 21 Miami beat Bethune-Cookman, 9-3.

After scoring just seven runs over three games last weekend, the Hurricanes (32-14) scored seven unanswered runs over the final five innings to put the game out of reach from the Wildcats (16-33) and win their fifth consecutive game,

“Those guys always play good against us,” head coach Gino DiMare said. “When you’re beating a pitcher like that that can beat anybody on any given day, I’m proud of our guys that battled and fought through it.”

While the final score didn’t show it, Friday’s game got started as a pitcher’s duel. The start of the series opener was delayed by 47 minutes due to inclement weather, but the late start did not affect either starting pitcher early on. Bethune Cookman’s Anthony Maldonado retired eight of the first nine Canes he faced, and Gabe Rivera only reached base after a wild pitch on a third strike.

“That guy who has thrown against us the last few years has been tough on us,” DiMare said. “Our guys just kept battling and grinding out at-bats. He was laboring as that game went on and I guarantee you he hasn’t done that too much in his outings.”

Lala, who was hitless in his last 14 at-bats, snapped out of his slump with one big swing in the bottom of the third. The freshman destroyed a full-count offering from Maldonado that hit off the parking garage in right field for a two-run homer.

“I was just looking for a pitch I could drive,” Lala said. “I’ve been struggling lately and I just telling myself to keep swinging the bat and eventually it would go my way and it did there.”

Miami starter Brian Van Belle, who tossed 8.1 scoreless innings last Saturday in a win over Virginia Tech, retired the first 12 Wildcats he faced before hitting Over Torres with a pitch to open the top of the fifth. Three pitches later, Chase DeBonis doubled to left and drove in Torres. Bethune-Cookman continued to rally against the Canes’ starter, posting three runs on three hits in the fifth to take a 3-2 lead.

The Canes picked up their starting pitcher in the bottom half of the fifth, as Anthony Vilar ripped a two-out, two-run single with the bases loaded that put the Hurricanes back on top, 4-3. The freshman infielder entered Friday’s game with two hits in his last 22 at-bats, but he was a huge contributor in Friday’s victory.

“It was just a big inning,” Vilar said. “We started the inning with nobody on base and two outs. Guys got on base and it was a big opportunity to score some runs and get the lead again. I saw a pitch I could hit and I hit a line drive up the middle.”

Willy Escala played a big role in the seventh, making two stellar defensive plays in the top of the inning and leading off the bottom of the frame with a double to left-center. The Miami second baseman scored when Vilar smacked an RBI single to right that gave the Canes a two-run lead. An error by BCU first baseman Joseph Strong on a Raymond Gil grounder with two outs allowed Vilar to score and put the Hurricanes ahead, 6-3.

“It’s a big thing once a team scores, it brings them down once you come back that next inning and score runs yourself,” Vilar said. “That’s a big thing that we have tried to accomplish all year and that’s what we are going to try to do all season.”

Van Belle was lifted after seven solid innings, allowing three runs on three hits while striking out three Wildcats. The redshirt junior did not allow a hit or a run outside of the three-run fifth inning, earning his team-leading seventh win of the season.

“Van Belle in his first Friday night game and faced up against a good pitcher, I thought he was very efficient tonight,” DiMare said. “I thought he threw a lot to contact. Seven innings and 84 pitches, that’s 12 pitches an inning and I’ll take that every time.”

Daniel Federman struck out the side in the top of the eighth and the Miami bats came alive again in the bottom of the inning against reliever Bryan Melendez. The junior lefty walked Michael Amditis and gave up a base hit to JP Gates before Rivera demolished an 0-2 pitch over the left field wall for a three-run homer.

Redshirt freshman Alex Ruiz entered to pitch the top of the ninth for Miami and protected the six-run lead to secure the Hurricanes eighth win in their last 10 games.

In honor of the 75th season of Miami Baseball, Miami athletics asked fans to vote for who they thought are some of the greatest Hurricanes to ever wear the orange and green.A commemorative poster featuring the all-time team will be given to the first 300 fans in attendance at Saturday’s game.