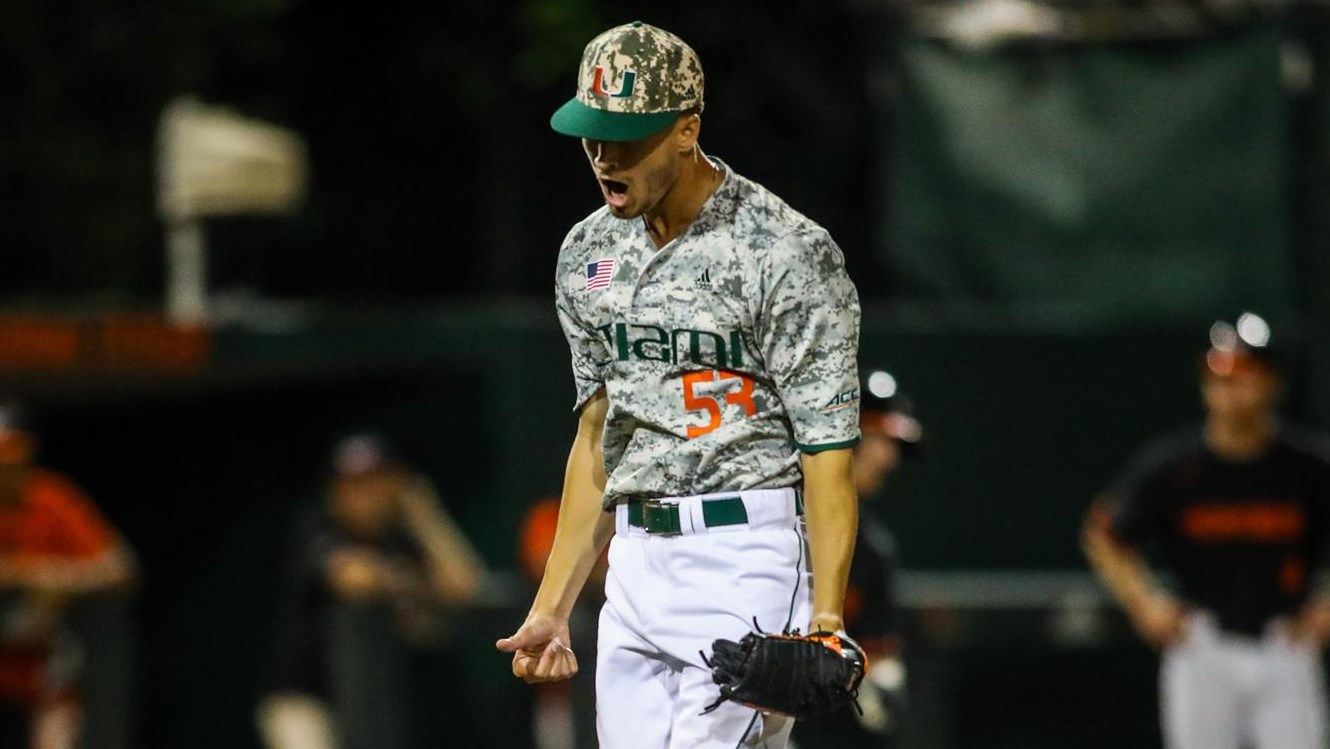 CORAL GABLES, Fla. – The University of Miami entered this weekend’s series against Virginia Tech down its top two starting pitchers, but redshirt junior Brian Van Belle stepped up when his team needed him most on Saturday night.

Van Belle was nearly unhittable against the Hokies, throwing a career-best 8.1 shutout innings that helped vault No. 24 Miami (30-14, 13-10 ACC) past Virginia Tech 1-0. The win was Miami’s 10thconsecutive victory over Virginia Tech (24-20, 7-16 ACC) and gave the Hurricanes their seventh straight series win over the Hokies.

“He just gotten better and better,” head coach Gino DiMare said. “He’s an extremely competitive kid, a very confident kid and we are very fortunate to have him on our team.”

The Canes’ offense got to work early, getting the first two batters to reach base in each of the opening two innings against VT starter Chris Gerard. The freshman lefty limited damage thanks to a pair of double plays, but Miami got a run across in the second when Alex Toral drove a ball to the warning track in right that allowed JP Gates to tag up and score easily to give the Hurricanes a 1-0 lead.

Van Belle protected that one-run lead for the next 6.1 innings, mowing down Virginia Tech hitters consistently. The right-hander allowed just four hits and struck out eight Hokies, one shy of matching his career-best nine strikeouts against UMBC on March 3, 2019.

“Last outing, my command was probably the worst it has ever been in my entire life,” Van Belle said. ” I told myself I never wanted to feel like that again and I held myself accountable and knew I had to bounce back this week. It was kind of brewing in inside me all week because I knew today had to be a big one.”

A junior college transfer from Broward College, Van Belle has been a major contributor in his first season in Coral Gables. He was especially impressive on Saturday night, striking out four of the nine leadoff hitters he faced.

“Coming in, you don’t know who are going to be your guys,” DiMare said. “You may have an idea, but new guys you’ve got to see where they fit. It was one of those things where he just got better and better and better. At the end of the day when you have to make your announcement of your rotation, it was like, ‘this guy has got to pitch for us.’ He earned the right to pitch for us and I think everybody in our locker room would agree with that.”

Van Belle’s most important strikeout was his final one, fanning Virginia Tech’s third hitter Kerry Carpenter with the tying run on third to end the top of the eighth. After the strikeout, the Pembroke Pines, Fla., native let out an emphatic roar as he walked off the mound towards an elated Miami dugout.

“I faced Kerry last year in junior college and he hit a home run off me on a hung change-up,” Van Belle said. “Every time I faced him there was kind of a fire lit in me and I knew I wanted to get him. It felt good.”

Van Belle returned to the mound in the ninth inning, just three outs away from throwing the first complete game shutout by a Hurricane since Jeb Bargfeldt held Boston College scoreless over nine innings on May 17, 2018.

“He was getting ahead on hitters and that was the biggest thing tonight,” catcher Michael Amditis said. “He was throwing all of his pitches for strikes and the breaking ball was down with two strikes and they were chasing. It was just a great night all-around for this guy.”

He got a quick out before surrendering a base hit and walking a batter to put to runners on with one out and Miami ahead by just a run.

DiMare turned to closer Gregory Veliz, who struck out Dalton Harum and retired Adam Fernandez to complete the shutout and earn his seventh save of the year.

“Greg is an intense guy, but he needs to control his emotions on the mound and he looked very calm out there,” DiMare said. “Obviously it is the most crucial part of the game and he’s got the ball in his hand and it made me feel very calm just to look at his demeanor on the mound. He’s throwing more strikes, he’s getting ahead of hitters and he has a wipeout slider so that makes that pitch even more dangerous. The more success he has, the more confidence he gets and it’s a win-win in every situation.”