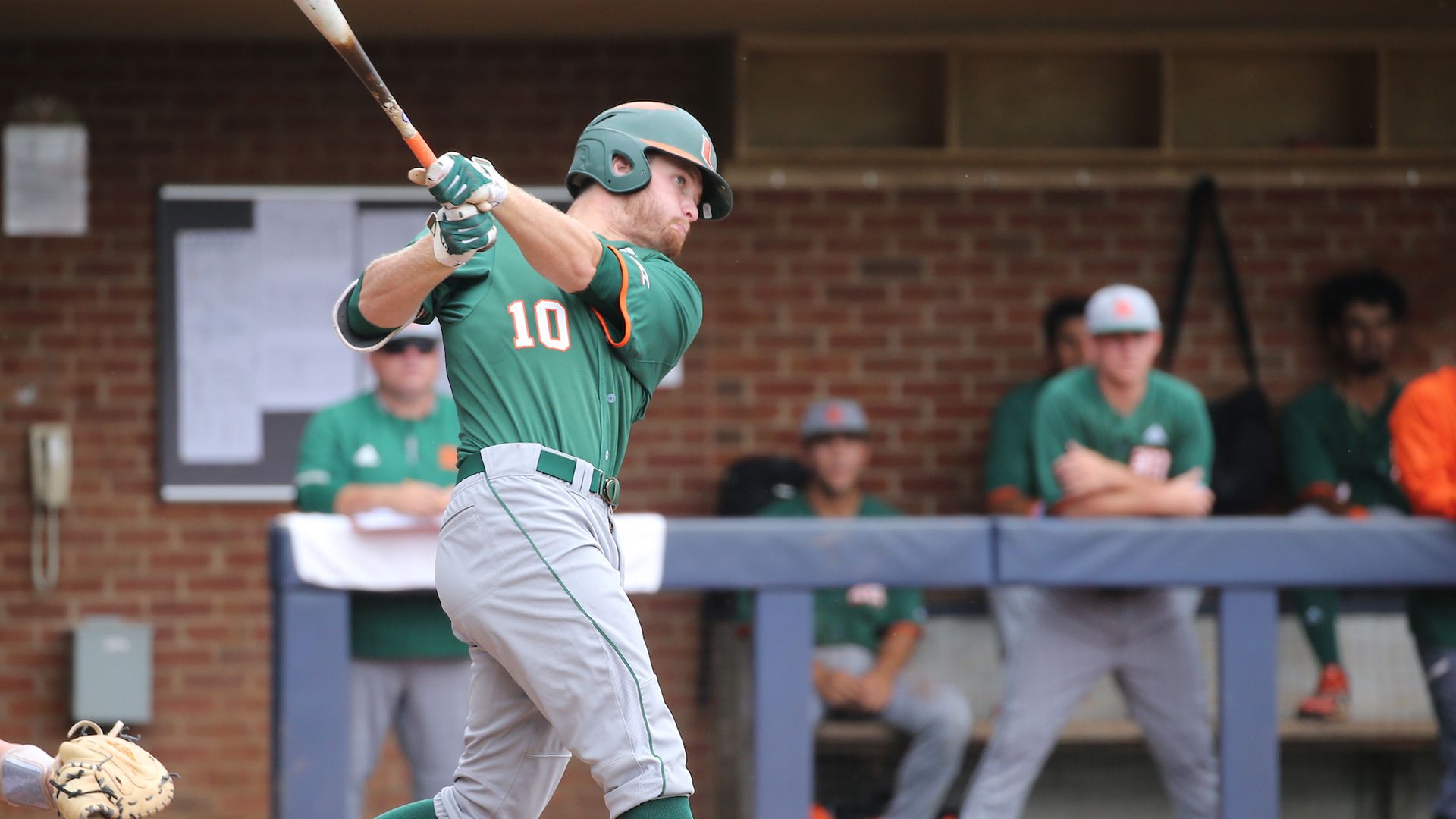 CHARLOTTESVILLE, Va. – A pair of home runs and an excellent start from Brian Van Belle helped the Miami Hurricanes complete a sweep of Virginia for the second straight year.

Sunday’s 3-1 victory over the Cavaliers (21-16, 8-10 ACC) secured the Hurricanes’ (25-12, 10-8 ACC) first sweep at Virginia in program history. After taking all three games in Coral Gables a year ago, Miami has run its current winning streak over UVA to six games.

“I’m happy with our pitching that’s been going good,” head coach Gino DiMare said. “Starting pitching and our bullpen has been excellent all weekend. It didn’t show today, but we hit a lot of balls hard. I know we got outhit, 9-6, but we hit some balls really, really hard in crucial situations. Good pitching, good defense and very happy to get the sweep.”

Miami stranded five runners over the first three innings, but the Hurricane bats finally broke through in the top of the fourth. JP Gates crushed a 1-0 pitch from reliever Zach Messinger deep to right for a solo homer that gave the Canes a one-run lead.

“We have the ability to hit the ball out of the ballpark, which we haven’t done the past few years, and it certainly makes it a lot easier,” DiMare said.

The Hurricanes added on in the top of the sixth, as Michael Amditis put a charge into a pitch from Kyle Whitten for a two-out, two-run homer that gave Miami a 3-0 lead.

“Home runs have been our M.O., ” DiMare said. “We’ve hit a lot of home runs and that’s how we scored our three runs. We had a solo shot and a two-run shot and hit a lot of other balls hard, but they were hit right at people.”

The Cavaliers finally scored in the seventh, as Nic Kent tripled with two outs off reliever Mark Mixon to send home Cayman Richardson and make it 3-1.

The run was charged to Miami starter Brian Van Belle, who was outstanding over a career-best 6.2 innings. The redshirt junior earned his fifth win of the year, allowing just one run on seven hits while striking out six Virginia batters.

“Fearless and competitive is how I’d describe him,” DiMare said of Van Belle. “The more I watch him the more I get amazed at how composed he is and how competitive he is. One of the things I’ve always gotten on him about is being up in the zone and he’s a fly ball guy, but he was down in the zone today. He did an excellent job. His pitch count was very efficient. It just got to the right situation where Mark has been good coming in. If our starting pitching throw well, I’m very confident we could play with anybody because I know we can swing the bats. Our lineup is very balanced.”

Sophomore Daniel Federman retired the side in order in the bottom of the eighth, but umpires cleared the field following Jack Weiller’s inning-ending pop-out to second.

The tarp was one the field for less than 10 minutes, covering the playing surface as some heavy rain came through Davenport Field.

After the 17-minute delay, Chesdin Harrington replaced Whitten on the mound for the top of the ninth and the Canes quickly got two runners on. But the right-hander pitched out of the jam to hold the Miami advantage at two.

DiMare turned to his closer in the bottom of the ninth and Gregory Veliz got the final three outs of the game to earn his second save of the weekend and fifth save of the year.

“This is the right time,” DiMare said. “We talked about it before the series began that now is the time to make a move. We have been sitting kind of on the outside looking in in terms of rankings and our goal is to try and host. Nobody is giving us a chance to host, but if we make a really, really good run here we will have a chance to do that.”

Miami is home at 6 p.m. on Tuesday against Florida Gulf Coast before hitting the road for a three-game set at Louisville beginning Thursday.