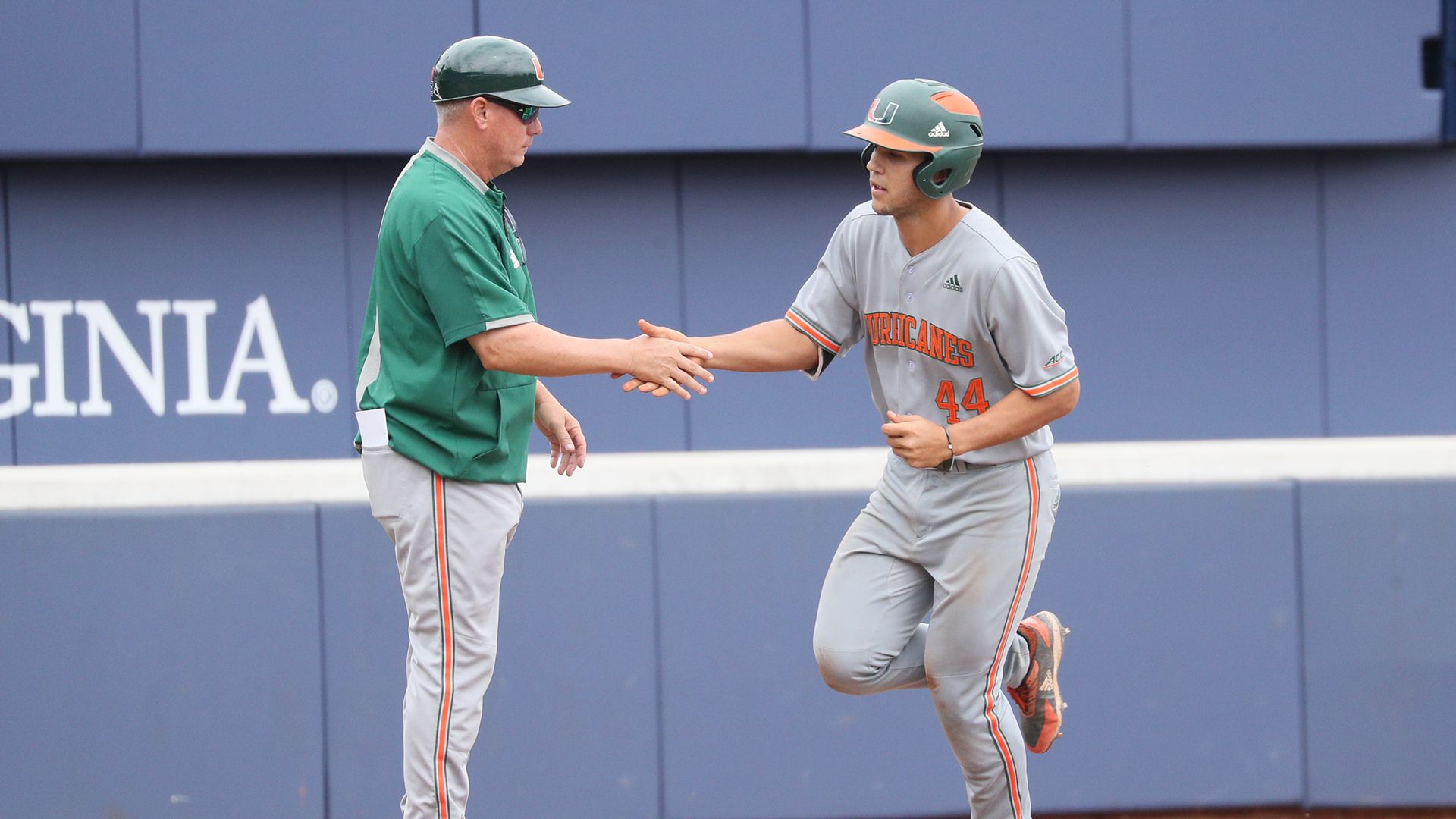 Virginia took an early lead against Miami starter Evan McKendry, plating two runs on four hits in the top of the second. But the Hurricanes charged back with a big third inning.

Gabe Rivera opened the inning with a base hit up the middle and Jordan Lala followed with a double to left center that gave the Canes have runners on second and third with nobody out against UVA starter Noah Murdock.

Anthony Vilar’s perfectly placed bunt drove home Rivera and cut Virginia’s lead in half, while Freddy Zamora’s RBi single up the middle evened the game at 2. But it was Del Castillo’s three-run bomb to right that punctuated a five-run rally and gave the Hurricanes their first lead of the day.

McKendry had a shutdown inning in the bottom of the third, retiring the side in order, and finished the day allowing six runs (four earned) over 6.1 innings while picking up his sixth win of the season.

Miami added three runs in the top of the sixth, as Del Castillo singled to drive home his fourth run of the day and tie his career-best. One batter later, Raymond Gil doubled to left-center to push home Zamora and Del Castillo and give the Hurricanes an 8-2 lead.

Virginia rallied in the bottom of the sixth, getting two runs on three hits against McKendry. Zack Gelof opened the inning with a loud double to left and scored two batters later on an RBI double by Jack Weiller. Logan Michaels followed with an RBI single up the middle, but was caught stealing and McKendry induced a groundout on the next pitch to end the rally.

The Cavaliers picked up two more runs in the bottom of the seventh, as Tanner Norris hit a leadoff double down the line in right and scored two batters later on a throwing error by Zamora. McKendry was lifted in favor of right-hander Daniel Federman, but the sophomore right-hander allowed Brendan Rivoli to score on a sacrifice fly to center that cut the Miami lead to two, 8-6.

Miami got one of the runs back in the top of the eighth, as Lala belted a solo homer to left to open the inning and give the Hurricanes a three-run cushion and Federman got the final eight out of the game to finish off his sixth save of the season.