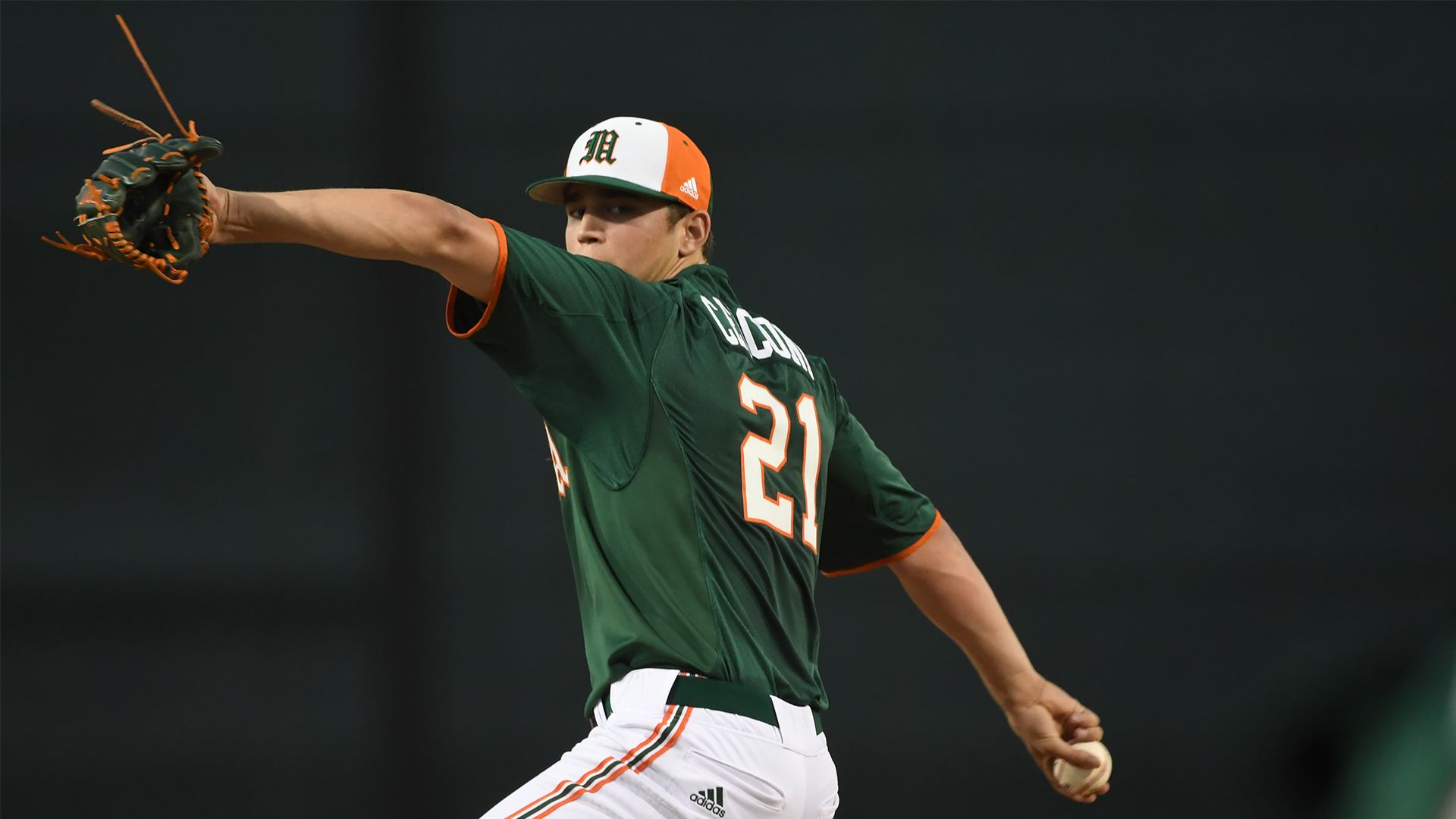 Cecconi and the Canes Crush FGCU, 10-1

FORT MYERS, Fla. – A brilliant pitching performance was bolstered by three homers to help the Miami Hurricanes get their second straight victory of the week over FGCU, 10-1.

“It started with Slade,” head coach Gino DiMare said. “He just dominated with the fastball. The pitching staff did a good job and that team is a good hitting team. That is not a slouch hitting team. That’s their strength so it was excellent on our part to be able to do that.”

Cecconi was brilliant at FGCU, striking out seven over five no-hit innings to earn his fifth win of the year. The freshman walked four and hit a batter, but always managed to pitch his way out of jams against the Eagles.

“I’d like to see him be able to go a little deeper in the game but other than that he dominated,” DiMare said. “There weren’t too many good swings off of him. I think his fastball, albeit we’d like it to be down more in the zone because it was elevated they were swinging through it. He started it and I thought his fastball had a lot of life to it.”

Miami hustled its way to a run in the top of the third, as Gabe Rivera sprinted out of the box to beat out what would have been an inning-ending a double play ball. The sophomore then stole second and was rewarded for his efforts when Jordan Lala slapped an RBI single to right to put the Canes up, 1-0

After Lala stole second, the Canes added two more runs in the inning when Anthony Vilar crushed a 3-2 pitch into Miami’s bullpen in right that gave the Hurricanes a 3-0 lead against FGCU starter Justin Gill.

Alex Toral destroyed an 0-1 pitch from Gill, hitting a no-doubter to right for his ACC-leading 14th homer of the year. The first baseman’s blast gave Miami a 4-0 lead in the top of the fifth.

The Hurricanes put the game out of reach in the top of the seventh, sending 11 men to the plate, loading the bases three times and scoring sixth runs against a pair of FGCU pitchers.

The rally started with one out, as the Canes strung together a trio of singles before Rivera demolished a breaking ball from reliever Sebastian Gruszecki that landed beyond the right field wall for an opposite field grand slam that gave the Canes an 8-0 lead.

“It was huge because we had a four-run lead at the time and it’s still a ballgame,” DiMare said. “That swing right there is kind of a knockout blow. It takes the wind out of the team. It was hit the other way and that ball was crushed. It was a breaking ball and he stayed back on it. He got a pitch up with the bases loaded and he hit it right-center. It was a great job by Gabe.”

Three straight Canes walked following Rivera’s grand slam, loading the bases for the second time in the seventh. Adrian Del Castillo pushes Lala home with an RBI groundout that made it 9-0. Raymond Gill walked to load the bases for the third time before reliever Nikolas Bitner balked home a run to give Miami double-digit runs.

The Eagles were held hitless for 6.2 innings before shortstop Eric Gonzalez hit a two-out double down the line in right off reliever Mark Mixon to snap the combined no-hit bid. Freshman lefty Bailey Mantilla entered in relief of Mixon and struck out pinch hitter Elijah Eusebio to preserve the shutout.

FGCU finally got on the scoreboard with one out in the ninth, as pinch-hitter Cameron Krzeminski got an infield hit on a slow chop to third off of redshirt freshman Alex Ruiz that traveled about halfway to the bag. Christian Proffitt followed with a pinch-hit RBI double to right-center that ended the Miami shutout just two outs before it was complete. But Ruiz settled in and wrapped up the final inning to close out Miami’s second win in as many days over the Eagles.

The Hurricanes will wrap up this weekend’s action on the road at the University of Virginia. Friday’s game will start at 6 p.m., while Saturday is scheduled for a 4 p.m. start and Sunday will begin at 1 p.m.