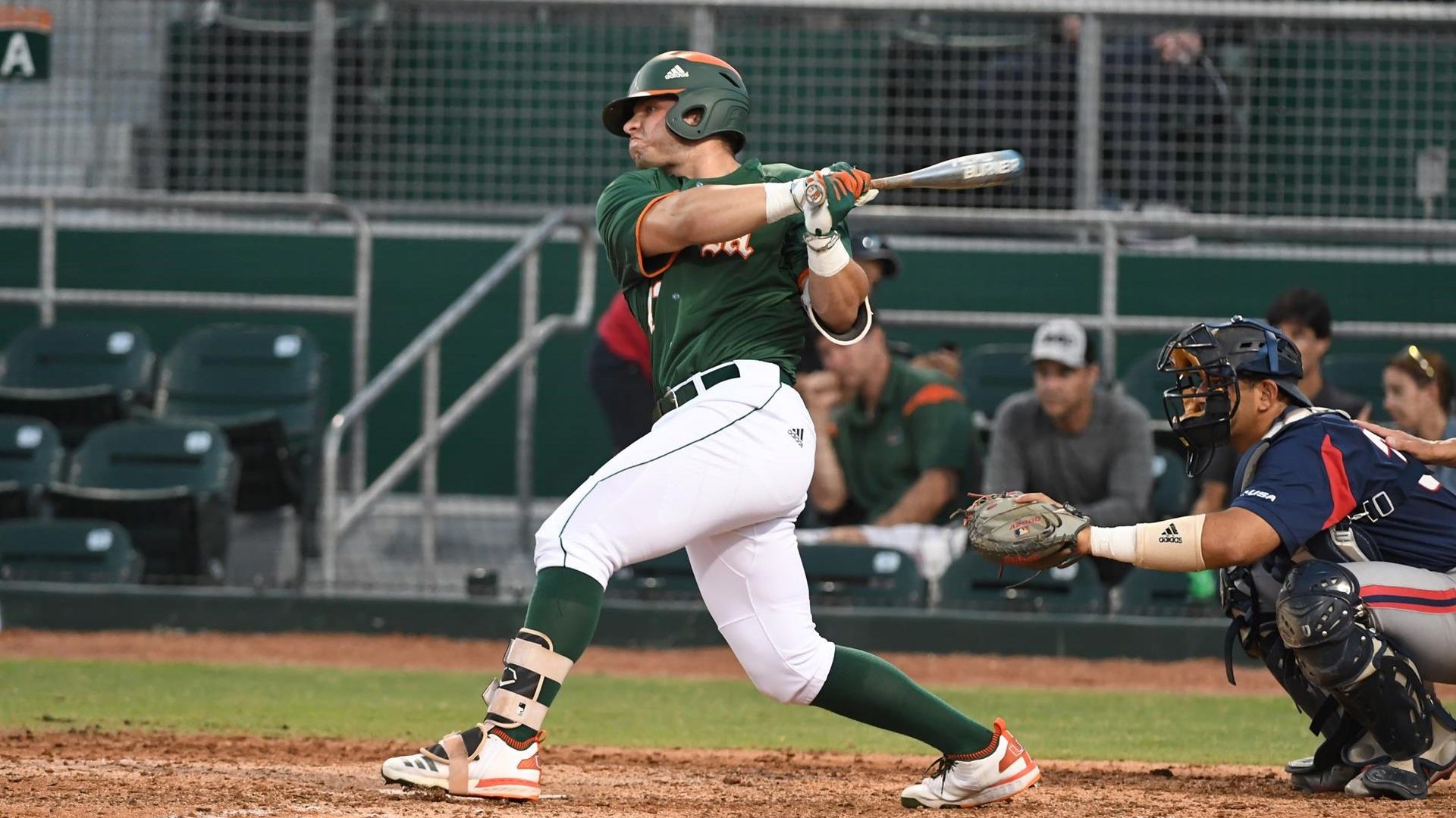 The Owls (20-9, 8-1 C-USA) made the most of their opportunities inside Alex Rodriguez Park at Mark Light Field, hitting 5-for-9 with runners in scoring position to help beat the Hurricanes (18-11, 5-7 ACC).

“Our team never folded,” head coach Gino DiMare said. “You look at the game and what happened there in that fifth inning and everything happened so fast. We’ve got to minimize those big innings. We can’t let that five-spot go up like that. That cannot happen.”

After having just one batter reach base over the first four innings, FAU’s offense heated up and the Owls took the lead against Miami starter Slade Cecconi in the top of the fifth. The Owls strung together four singles to open the inning and take a 2-1 lead before an RBI double from Eric Rivera and a two-out, two-run bloop single to right from Francisco Urbaez closed out the big inning for FAU and gave the Owls a 5-1 lead.

The Canes picked up a run in the bottom of the fifth, as JP Gates led off the inning with a double to left and scored two batters later on a sacrifice fly by Jordan Lala that brought the Hurricanes within three, 5-2.

Miami made it 5-3 in the bottom of the seventh, as Tony Jenkins drove home Rivera on a groundout to third. But the Canes had runners on first and second with just one out and could not add on in the inning, as reliever Vince Coletti retired Anthony Vilar and Freddy Zamora to end the threat.

“We left a lot of guys on base,” DiMare said. “We hit some balls hard, but we didn’t do anything with runners in scoring position. We walked four times and only struck out once all game. I can’t recall us doing that in too many games this year. We put balls in play, we hit the balls hard and there weren’t many easy outs. It’s just baseball. We just can’t give up five runs. That’s the thing that sticks out.”

An inning later, the Canes threatened again. Adrian Del Castillo led off the bottom of the eighth with his second hit of the night to record his 12thmutli-hit game of the year. Raymond Gil followed with a walk to put runners on first and second with nobody out and Alex Toral up against reliever Vince Coletti.

Toral ripped a line drive to first, but Gunnar Lambert snared the frozen rope and stepped on the bag to double up pinch runner Willy Escala. Rivera followed with a flyout to center and Colleti pitched out of trouble to preserve the two-run lead.

“Most of the balls we hit were right on the screws,” DiMare said. “I can’t fault our guys for that. We had a bad break there where we hit a missile right at somebody and they doubled us up with first and second and the tying run up.”

The Hurricanes scratched another run across in the ninth, as Vilar’s fielder’s choice pushed home pinch hitter Chad Crosbie to make it 6-4. But the Canes could not complete their comeback attempt against FAU.

Miami scored first on Wednesday, as sophomore outfielder Gabe Rivera hit a solo homer deep to left field on the first pitch he saw from FAU starter Jon Jon Kostantis that put Miami up, 1-0. But the Owls’ five-run rally in the fifth made the difference on Wednesday.

“The bats were good and we hit the ball hard,” DiMare said. “Every inning I thought we gave good at-bats. We hit a lot of balls hard while the wind was blowing extremely hard straight in. It was an unusual wind. I would have said we would have had three or four home runs today. We weren’t hitting many pop-ups.”

The Hurricanes are back in action this weekend, hosting the rival Florida State Seminoles. Friday and Saturday’s games are scheduled for 7 p.m., while Sunday’s series finale will begin at 1 p.m. Miami will honor the 1999 national championship team on Saturday, as they celebrate the 20thanniversary of clinching the program’s third national title with a 6-5 win over the Seminoles.