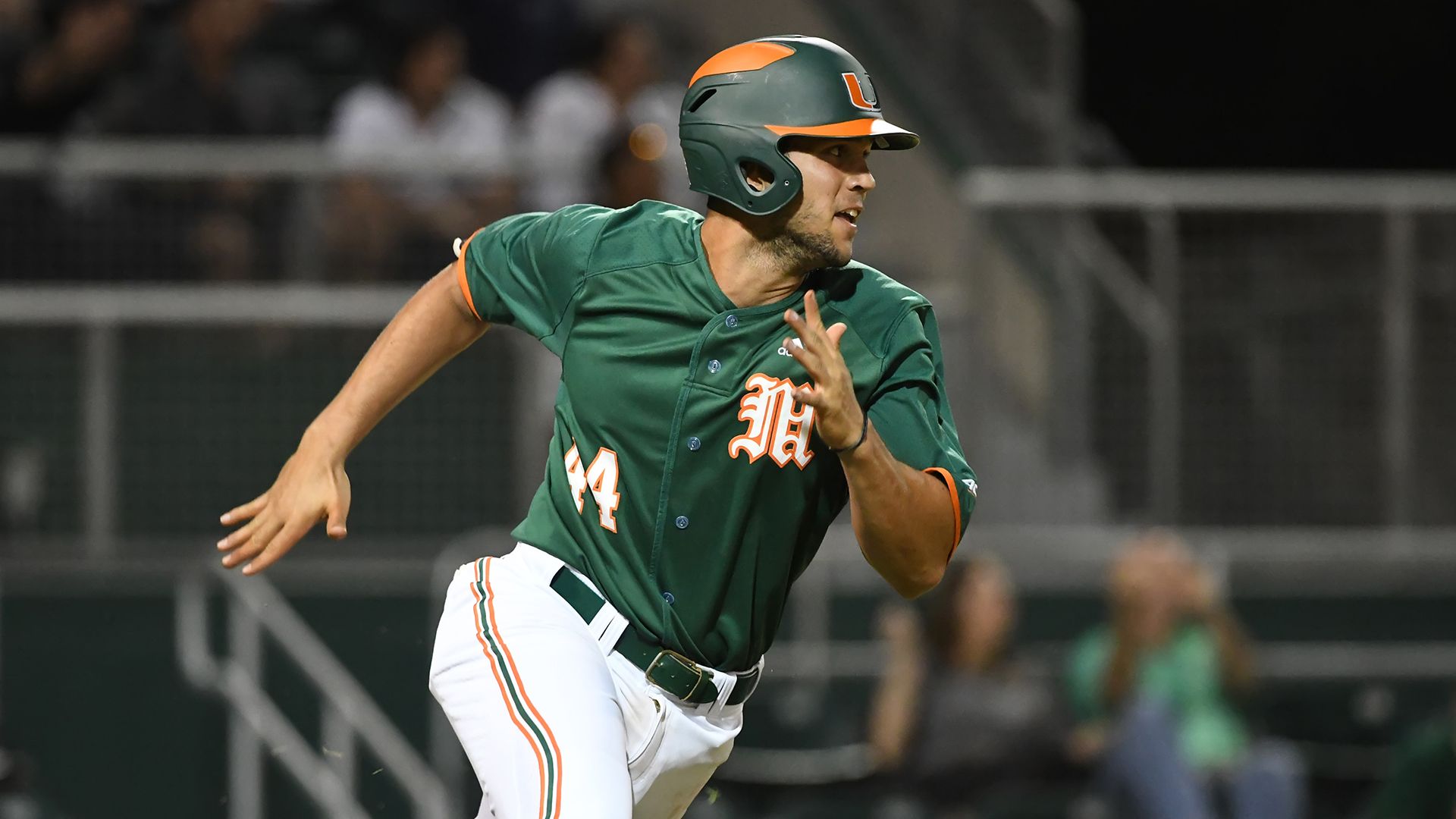 The Canes (17-10, 4-7 ACC) scored 10 runs for the third straight game, but the Panthers (8-17, 2-9 ACC) had an offensive explosion on Saturday to even the series. Pitt scored in each of the first five innings in the second game of the weekend series and posted runs in six of eight innings against Miami’s pitching.

“Tough loss,” Miami head coach Gino DiMare said. “We are going through a funk right now with our pitching. I’m not sure why and I can’t explain it. We need a good outing from Brian Van Belle tomorrow. We need to figure out a way to win the game and do whatever it takes. If it’s a high-scoring game, then we need to find a way to outscore them. If it’s a low-scoring game, we’ve got to figure out a way to win that too.”

Miami entered the top of the ninth down, 11-9, but the Hurricanes would not go down without a fight. Raymond Gil, who did not start because of a sore knee, sparked the surge with a one-out pinch-hit home run deep to left field that brought the Canes within one, 11-10. The homer was Gil’s eighth of the season and the third pinch-hit home run by a Hurricane in 2019.

“Ray comes off the bench and hits a big one,” DiMare said. “We would have liked to have him in the lineup today and get more at-bats than just that one because you can see what he can do.

After Michael Amditis laced the next pitch from right-hander Christian Camacho into left-center for a base hit, Isaac Quiñones followed with a pinch-hit single to left to put runners on first and second with one out. Anthony Vilar’s two-out walk loaded the bases for Freddy Zamora.

“Huge there to have those guys come off the bench and step up,” DiMare said. “Quiñones had six at-bats all season before today and hasn’t said a word. He hasn’t complained. He’s stayed ready and waited his time. He was one of our better hitters last year and it just turns out that he’s playing behind Amditis and you’ve got Del Castillo. Those guys have been doing a great job. I’ve been wanting to play him. It’s just been so hard because of the situation we’ve been in but he stepped up big there.”

The sophomore shortstop had three hits on Saturday and seven hits in the series against Pitt, but could not come through for the Canes in his final turn as he grounded out to short and the Panthers escaped danger and tied the series.

The 11 runs are the second-most scored in a game by Pitt this season and the Panthers, who scored 10 in Friday’s series opener, got their bats going from the start.

One day after belting a pair of homers, Pitt centerfielder Connor Perry kept his hot streak going with a two-out solo homer in the bottom of the first that gave the Panthers their first lead of the series.

The lead would not last long, as Miami got its own two-out rally going in the top of the second. Gabe Rivera singled to left and scored on a clutch RBI double by Amditis that hit off the wall in left-center and evened the game at 1.

The Panthers played small ball to retake the lead in the bottom of the second, as Bryce O’Farrell bunted for an RBI single with runners at the corners and nobody out to put Pitt back out front, 2-1.

Pitt scored for the third consecutive inning, taking a 3-1 lead after Ron Washington, Jr. hit a one-out double off the wall in right-center to drive home Perry.

Miami cut the Pitt advantage in half in the fourth, scoring a run on a grounder to short by Gabe Rivera. The Hurricanes loaded the bases with nobody out, but Pitt starter Dan Hammer struck out Willy Escala and got Jordan Lala to ground into an inning-ending double play to end the threat and keep Pitt on top, 3-2.

While the Canes could not get anything going with the bases loaded in the top of the inning, Pitt loaded the bases with two outs in the bottom of the fourth before Washington, Jr. hit a bases-clearing double that gave Pitt and 6-2 lead and knocked McMahon out of the game after 3.2 innings.

The Hurricanes’ bats came alive in the top of the fifth, scoring a pair of runs that cut Pitt’s lead to two. Adrian Del Castillo laced an RBI single past the first baseman to drive in Anthony Vilar and JP Gates drove in Zamora on a sacrifice fly to left that made it 6-4.

Pitt scored for the fifth straight inning, as Gates walked for straight batters with two outs in the inning to give the Panthers a free run and a 7-4 lead before Tyler Keysor entered to pitch and ended the rally with a fly out to center by Washington, Jr.

“It’s deflating,” DiMare said. “It’s a deflating loss and it was deflating each inning. You could see it in our body language out on the field. It didn’t carry over to our at-bats because we kept plugging away but we let them score in the first five innings and six out of the eight innings. It’s tough when a team is doing that. Every guy you bring out of the pen and give an opportunity to and they’re not taking advantage of it. The pitchers are going to have to find a way to get through this. We are a much, much better staff than what we are showing right now.”

Miami finally broke through in the top of the sixth, scoring five runs to take their first lead of the game. Vilar got it started with a two-run single up the middle that brought the Hurricanes within one and ended Hammer’s afternoon. Reliever Brady Deveraux, who got the win on Saturday, walked Zamora on four pitches before Del Castillo smashed a 2-2 pitch over the wall in right for a three-run homer that gave Miami a 9-7 lead. The three-run shot also secured a second straight 4-RBI game for the freshman.

The Panthers remained resilient, stringing together three singles by Gregory Ryan, Jr., Sky Duff and Cole MacLaren to cut Miami’s lead to one. MacLaren’s hit to the left side knocked Tyler Keysor out of the game in favor of Jeremy Cook, but the lefty walked Perry to load the bases with no outs and Washington, Jr. due up for Pitt.

Mark Mixon, who followed Cook on the mound and took the loss, balked in a run before surrendering a two-run double to Washington that put Pitt back ahead, 11-9. Camacho, who threw the final 1.2 innings, earned his first save of the season.