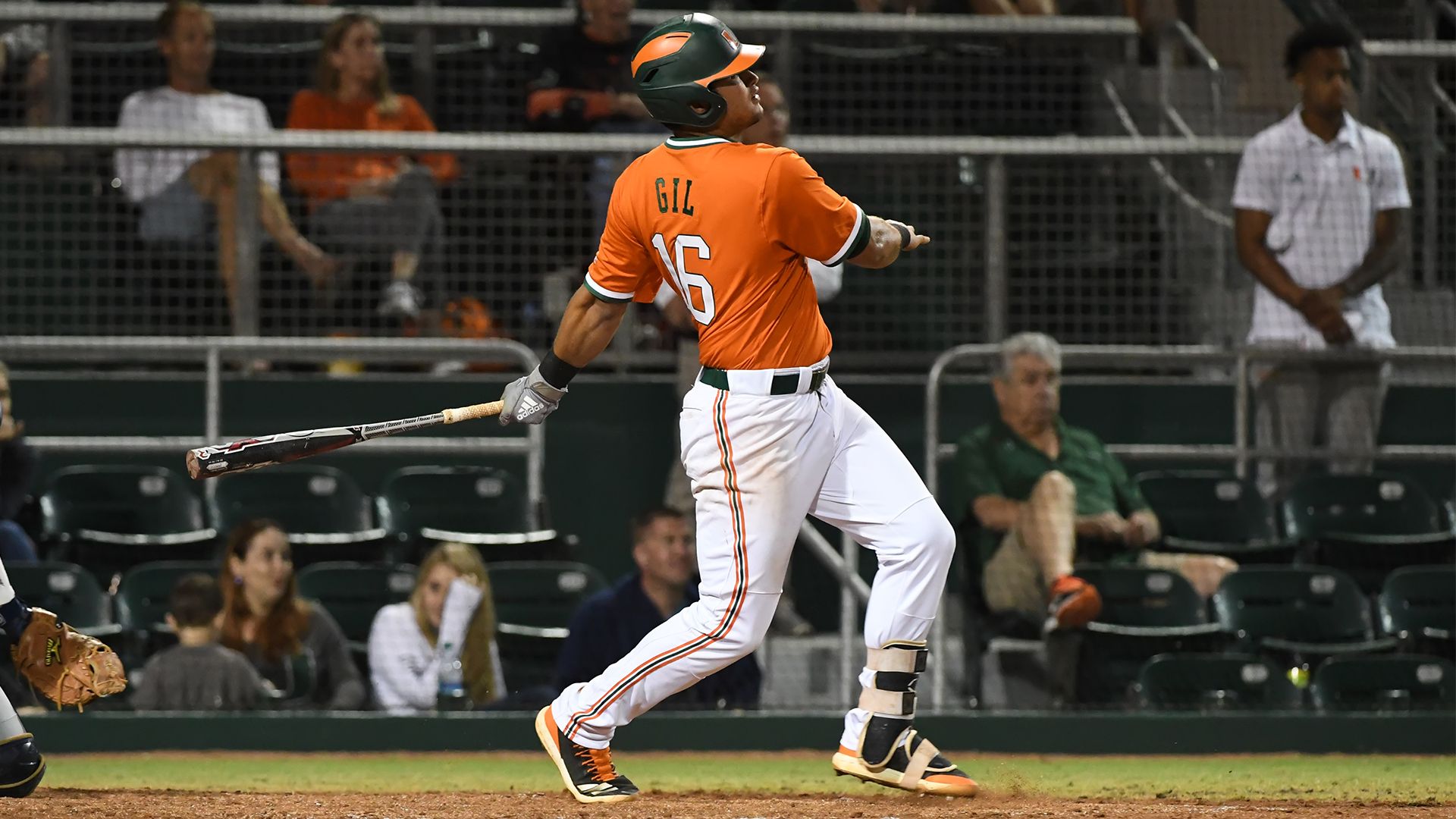 Raymond Gil had a two-homer game and Anthony Vilar posted four hits as the Hurricanes (16-9, 3-6 ACC) secured a season series win over the Owls (16-9, 5-1 C-USA). Miami beat FAU, 11-4, in the first meeting between the two sides on Feb. 20. Wednesday’s win also snapped a six-game losing streak for the Canes.

“It was a bunch of guys in the lineup today that came through,” Miami head coach Gino DiMare said. “We had a lot of runners reach third with less than two outs and we did a good job going 4-for-4 there. We had some crucial hits. We had the home runs and whenever you score five runs and do it twice you should win those games with 10 runs right there. The whole lineup contributed in some capacity.”

Jordan Lala put a charge into a 2-0 pitch from FAU starter Ryan Sandberg, belting his second career leadoff homer. The freshman, who hit his first career homer to open the Appalachian State game on March 6, got Miami’s offense going from the start and his teammates followed his lead.

Gil crushed a one-out two-run homer to left that pushed home Vilar, while Alex Toral delivered the final blow to Sandberg’s night, destroying the first pitch he saw from the sophomore and depositing into the trees beyond the batting cages past the right field fence.

“We wanted to get going from the start,” Gil said. “That was huge for us to get off to a good start and it helped us a lot with momentum.”

The Canes added two runs in the top of the second, as Freddy Zamora pushed Lala home with a sacrifice fly and Gil drove in Vilar with an RBI base hit through the left side that made it 7-0.

After a rough start by Sandberg and some mixed results from Cooley, FAU’s bullpen settled in. Cooley threw a scoreless third and Jon Jon Kostantis followed with three scoreless innings of relief. The Owls retired 10 straight Hurricanes from the end of the second through the fifth and that allowed FAU to chip away at the seven-run Miami lead.

FAU saw its first eight batters retired by Miami starter Slade Cecconi, but the Owls got on the scoreboard with two outs in the bottom of the third. Ninth hitter Jacob Josey doubled to left and scored on an RBI single to center by Eric Rivera that gave FAU some life after struggling early against the freshman right-hander.

The Owls got a rally going in the fifth, as Mitchell Hartigan’s two-run homer and Gunnar Lambert’s two-out solo shot cut Miami’s lead to three, 7-4

An inning later FAU nearly cut the lead to one, as Pedro Pages’ double to center landed just shy of the wall. Cecconi was lifted with two on and one out in the sixth in favor of JP Gates, who started as Miami’s designated hitter, but earned his fourth win of the season. Joe Montes drove both runners home with a two-run single to center that brought the Owls within one, 7-6.

But the Hurricanes’ offense charged back with a five-run seventh inning, sending all nine players to bat against a pair of FAU pitchers.

“It was huge because we’ve blown some leads a couple times this year,” DiMare said. “We’ve had some big leads and we’ve let teams back in. Thank goodness we had some innings left to go there in those last three innings and e scored nine runs. It was great to see our offense do well.”

Miami’s rally began against right-hander Vince Colleti, as the right-hander walked Toral with the bases loaded to push home a run. But it was Gates’ two-run double off the wall in left that broke the inning open and ended Colleti’s night.

Gabe Rivera singled off right-hander Dylan Carter, driving home Toral and putting runners at the corners before stealing second and helping Gates score from third on a throwing error by the catcher, Pages, that gave Miami a 12-6 advantage.

“They brought in their best bullpen guys and that’s who we got to,” DiMare said. “That was good to see. It wasn’t the bottom of their pen. It was a close game at the time. I’m happy to see us score some runs and swing the bat like we did.”

The Canes had a three-run rally in the eighth, capped by a two-run homer by Gil that gave the sophomore his second two-homer game of his career. Gil also hit a pair of home runs against UMBC on March 3.

“We struggled a little bit during this losing streak and it’s good to get back to what we’ve been doing all year,” Gil said.

Miami scored its final run of the night on a wild pitch with runners at the corners by lefty Dylan O’Connell. The errant offering allowed Rivera to score easily and give Miami a 10-run win over FAU.

“We battled every game during that tough stretch,” DiMare said. “We had some leads in those games and we lost them early or lost them late. At the end of the day, you have to get the mentality back where you feel confident that you can win games and it was good to get this one here. Now we’ve got to get ready to go up to Pitt and play some more ACC games and get back going in the conference.”

Miami is back in action this weekend, traveling to Pittsburgh for a three-game set against the Panthers. Friday’s game is scheduled to begin at 6 p.m., while Saturday is set for a 3 p.m. start and Sunday’s finale is scheduled for 1 p.m.