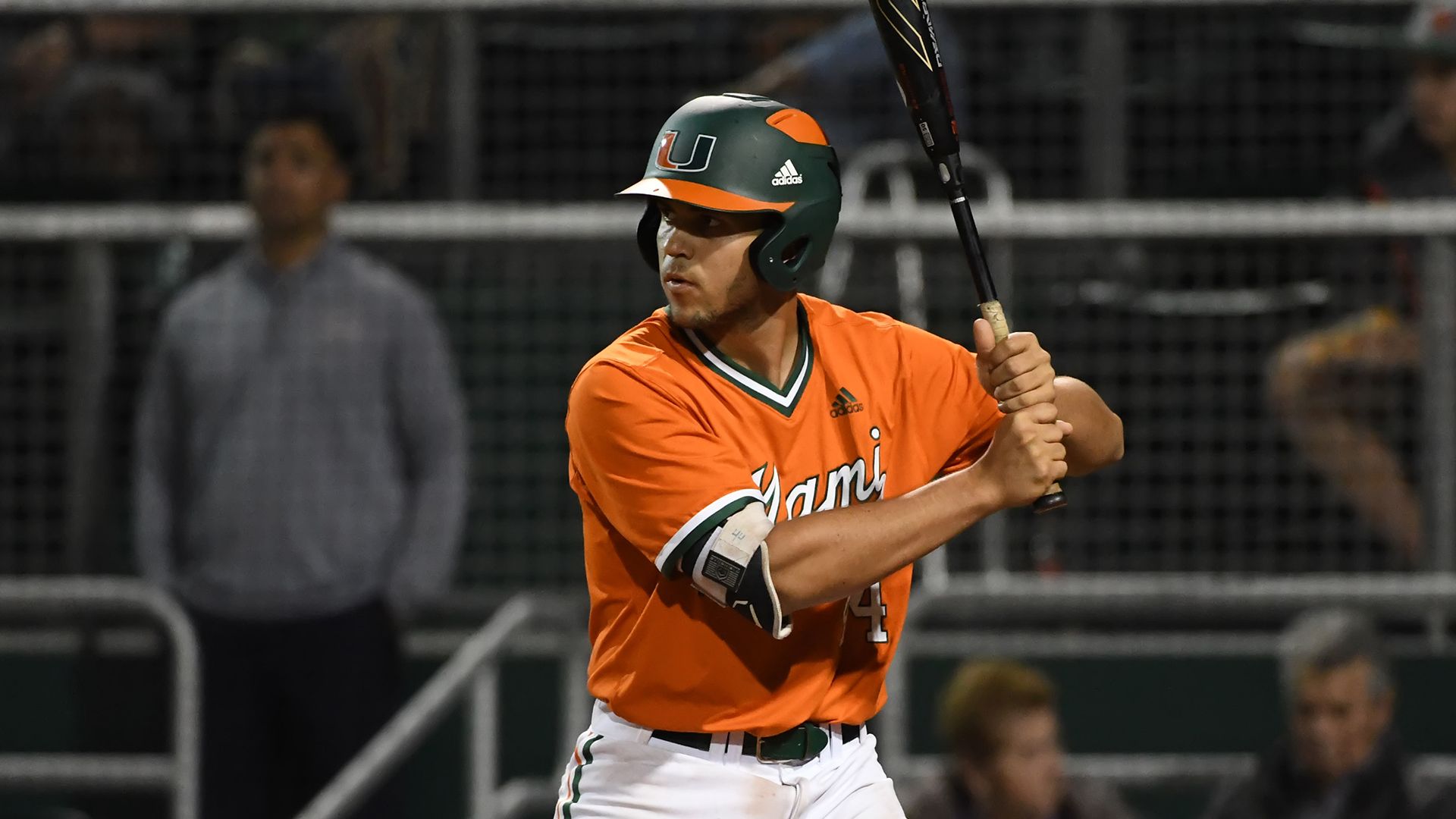 CORAL GABLES, Fla. – The Miami Hurricanes dropped a midweek matchup for the first time in 2019, falling to Columbia 4-2.

The Lions (3-10, 0-0 Ivy) used nine different pitchers on Wednesday night, keeping the Canes (15-6 3-3 ACC) off balance at the plate and earning a big win inside Alex Rodriguez Park at Mark Light Field. The loss dropped Miami to 5-1 in midweek games this season.

“Whatever word you want to use: flat, laid back, nonchalant,” head coach Gino DiMare said of the Hurricanes. “Just very disappointing. Not what we want to see from our team.”

Miami made the most of Columbia defensive miscues, scoring a run in the first after the Lions made three errors in the inning – including two on a hard grounder by Adrian Del Castillo to first that allowed the freshman to reach and advance to second while Freddy Zamora came around to score and give Miami a 1-0 lead. Del Castillo finished the day 2-for-4 to record his seventh multi-hit game of the year.

An inning later, JP Gates drove home Raymond Gil on a hard-hit ball to second that took a wicked hop on infielder Josh Nicoloff. The ball scurried away and Gates’ RBI single sent home Gil to give the Canes a 2-0 advantage.

“I don’t ever feel like we had any momentum,” DiMare said. “They gave us the runs early. We didn’t really do anything to deserve to get them. They just made errors. I just never felt like there was life in our team today. I don’t know why.”

The Lions got on the scoreboard thanks to an error by Zamora, as the shortstop dropped a popup by Chandler Bengtson that allowed the Columbia designated hitter to reach with one out in the fourth. Two batters later, he scored on a two-out RBI single to center from AJ DiFillipo that cut Miami’s lead in half, 2-1.

“I don’t know exactly what they’re thinking coming out and playing like that,” DiMare said. “They were forewarned before the game about these midweek games and we know anything can happen in baseball. We didn’t even compete. It’s embarrassing for me as a head coach because I never thought I’d have to say that about a team of mine that wouldn’t come out at least to compete but we didn’t.”

Columbia rallied in the sixth, as Cecconi walked DeFillipo with one out and the bases loaded. The free pass led to Cecconi being lifted in favor of junior Gregory Veliz. A miscommunication on a fly ball to right-center between Tony Jenkins and Willy Escala resulted in an RBI single by Joshua Solomon that broke the tie and put the Lions ahead, 3-2

“Slade was going along good there, but then he fell apart. He hit a guy and walked a couple guys. He started the inning in the 60s and then before you know it it’s 85 pitches. Real quick, it got ugly there so we had to bring in Veliz.”

Columbia added a run in the top of the eighth, as reliever Albert Maury yanked a pinch wide of Del Castillo and the wild pitch allowed Nicoloff to score from third and double the Lions’ lead, 4-2.

The Hurricanes threatened in the bottom of the eighth, as Zamora and Del Castillo opened the inning with back-to-back singles off reliever Jimmy Smiley to put runners at the corners with nobody out. Alex Toral ripped a line drive to first and Del Castillo was doubled up and Raymond Gil flew out to deep left to end the inning and strand Zamora at third.

“I don’t really have anything positive to say about the game,” DiMare said. “It just was flat from the get-go. The only inning we got something going was in that eighth inning with first and third and Toral hits a missile right at the first baseman and it’s a double play. That’s part of the game. That’s the only inning that I felt like we did anything because we hit three balls pretty hard in a row but that was it.”

The Canes went down in order in the ninth, and right-hander Ethan Abrams earned his first save of the year to close out the win for Columbia.

Miami is back in action this weekend, hosting No. 5 NC State in a three-game series beginning Friday night at 7 p.m. Saturday’s game is set for 7 p.m., while Sunday’s finale will begin at 1 p.m.