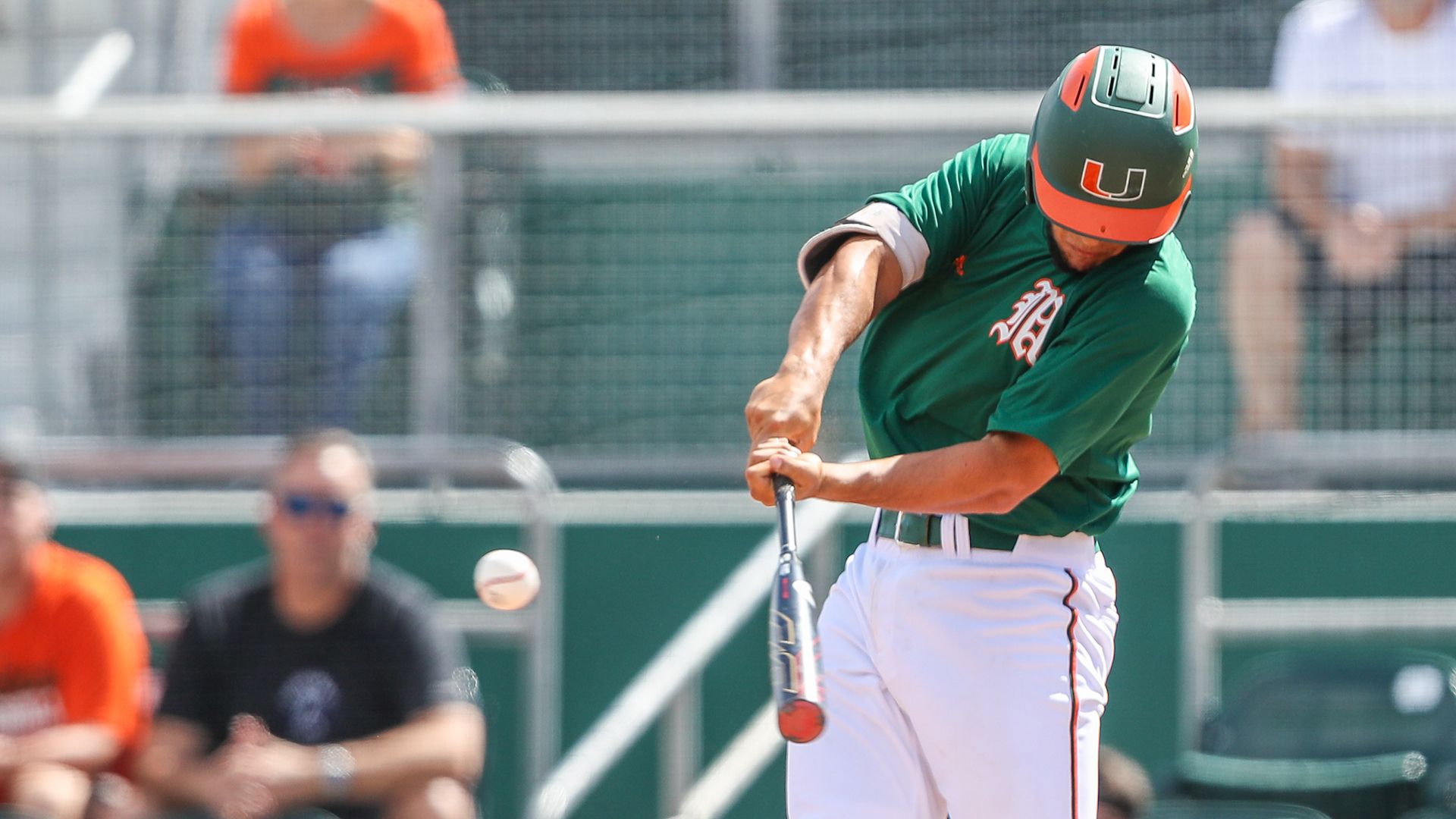 The Hurricanes (15-4, 3-3 ACC) jumped out to a three-run lead in the first, but the Tar Heels (16-5, 2-4 ACC) exploded for seven runs over the first three innings to win the series finale at Boshamer Stadium on Sunday.

“It’s tough,” head coach Gino DiMare said. “We did this earlier with Florida. Game 1 is such an important game to set the tone. We didn’t play very well yesterday. Today was a little better. We swung the bat a little bit better. At the end of the day, it’s disappointing, but we have to learn to take care of business when we win the first game of the series. Our team has got to be able to do that.”

Miami’s bats got hot early against UNC starter Austin Bergner, ripping three hits including a three-run homer deep to right from Adrian Del Castillo that put the Canes up, 3-0

But the Tar Heels put a rally together in the bottom of the first against Miami’s Brian Van Belle, scoring four runs on three hits to take a 4-3 lead. The four-run inning was capped by a two-run homer from Sabato that shifted the advantage from Miami to North Carolina.

“The biggest disappointment is we came out and scored three runs on the board and we let them come back with a four-spot in the bottom of the first,” DiMare said. “To me, that’s happened to many times so far early in the season where we are scoring and putting up runs and we are letting a team come right back. That can’t happen. Not only is it deflating to us, but it is absolutely energizing to the other team. Our guys still played hard and still got after it, but if we are going to be a great team we have to put up a zero. We cannot let them have a big inning like that after we put up three runs.”

While Bergner settled down after a rough first inning, North Carolina continued to barrel up Van Belle’s pitches. Dylan Harris, who doubled off the top of the wall in the first, hit a two-out solo homer to right to double UNC’s lead after two innings.

Sabato struck again in the third, hitting an opposite field two-run shot that the freshman his second homer in as many at-bats and doubled Carolina’s lead, 7-3. Van Belle finished the day allowing seven runs on seven hits over three innings while striking out five.

Miami turned to lefty reliever Jeremy Cook in the fourth and the sophomore responded with an excellent outing. Cook threw 2.2 scoreless innings of relief, allowing just one hit and one walk to keep North Carolina within striking distance.

“It was good to see from Cook because he has struggled,” DiMare said. “He hasn’t had many opportunities because he has struggled, but we gave him one there. He’s still got to get his pitch count down. He’s throwing too many pitches and getting deep into counts, but we have to be positive in the fact that he threw better and threw more strikes than he has in the past.”

Greg Veliz followed with 1.1 scoreless innings, striking out two and keeping the Canes close. The junior right-hander was outstanding in the series, allowing zero hits over 3.1 shutout innings while striking out six and walking just two.

“Greg, to me, looks electric,” DiMare said. “I really love watching him throw because the ball just explodes out of his hand. His slider is so good right now. It’s short and it’s sharp and he’s throwing it for strikes and he is burying it when he needs to I’m very happy with those guys.”

After a rough first inning, Bergner cruised through the next four before the Canes got a two-out rally in the sixth. Raymond Gil smacked a two-out double and scored on an RBI single from Dylan Cloonan to cut the lead to three, 7-4

Two innings later, Freddy Zamora led off the eighth with a solo homer to left off lefty Caden O’Brien that brought Miami within two, 7-5. Raymond Gil reached on an error by third baseman Ashton McGee and that brought the tying run to the plate with two outs, but Dylan Cloonan swung through a 2-2 pitch to end the threat.

UNC added a run in the eighth, as Ike Freeman grounded out to short with the bases loaded and Brandon Martorano scored from third to build a three-run cushion heading to the ninth.

The Canes are back in action Tuesday, beginning a five-game homestand with a two-game midweek series against Columbia. Both games on Tuesday and Wednesday are scheduled to begin at 6 p.m.