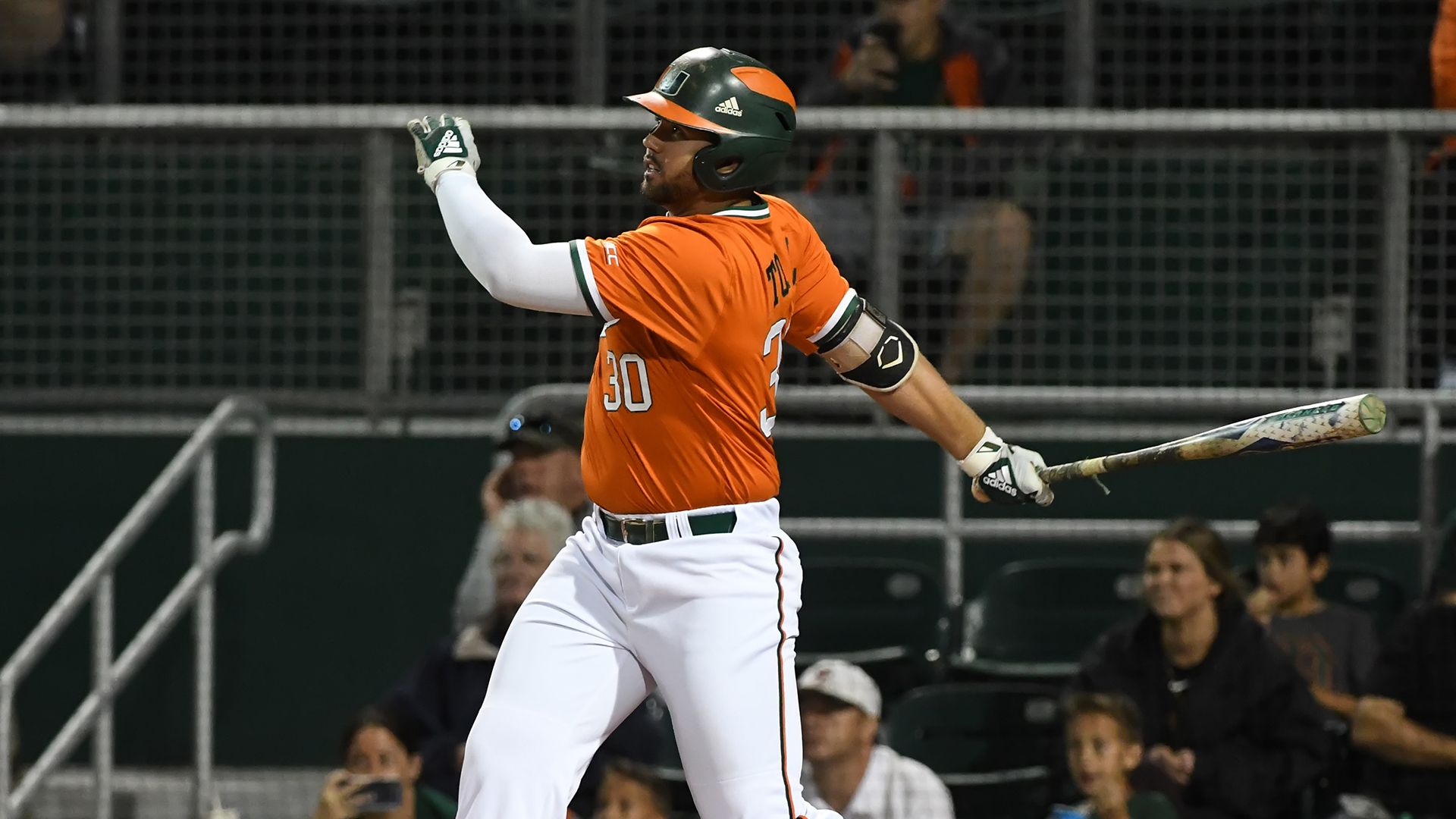 CHAPEL HILL, N.C. – The Miami Hurricanes were in a hole early and answered back, No. 8 North Carolina countered back with a knockout blow to even the series with a 9-3 win.

The Canes (15-4, 3-2 ACC) and Tar Heels (15-5, 1-4 ACC) were tied at three though four innings, but a big day from left fielder Michael Busch and strong pitching that limited Miami’s potent offense helped UNC give Miami its first road loss of ACC play on Saturday afternoon at Boshamer Stadium.

“It got away from us in the end, obviously,” head coach Gino DiMare said. “We didn’t throw enough strikes. We fell behind way too many hitters and walked too many guys. Nine walks, you can’t win like that. But at the end of the day, it’s 1-1. We turn the page and get ready to play tomorrow. It’s the rubber match and we have to find a way to win the series.”

Miami starter Chris McMahon induced inning-ending double plays to get out of jams in the first two frames, but the Tar Heels finally got a rally going against the sophomore in the third.

The bottom two in the UNC order reached base to open the inning and moved to second and third after a sacrifice bunt by leadoff man Dylan Harris. Busch and Ike Freeman followed with consecutive RBI singles and the Heels added a third run when Miami could not turn a double play on a grounder to short by Caleb Roberts that sent Busch home to give UNC a 3-0 lead.

The Hurricanes bats answered right back with a big fourth inning against UNC starter Tyler Baum. Anthony Vilar smacked a one-out base hit that snapped a streak of nine consecutive Hurricanes retired by Baum. Two batters later, Adrian Del Castillo doubled off the wall in right to score Vilar from first and then Alex Toral crushed his 10thhome run of the year, a two-run bomb to right field, that evened the score, 3-3.

North Carolina loaded the bases with no outs in the fifth, ending McMahon’s afternoon and positioning the Tar Heels for a big inning that ended with three runs scored and nine UNC hitters coming to the plate.

Reliever Albert Maury got two quick outs, striking out Roberts and getting Aaron Sabato to hit a sacrifice fly to right that put the Heels back ahead. But UNC followed with back-to-back RBI hits through the left side to beat Miami’s shifted infield and give the Tar Heels a 6-3 lead.

“I thought Albert actually threw pretty well,” DiMare said. “I know he had one walk, but those two balls weren’t hit hard. We had the shift on and we are going to keep shifting. That’s what we do. We’ve had balls hit into the shift and it has helped us out a lot. It didn’t work out for us in that particular inning, but I thought Albert threw well and I was happy to see that.”

UNC added on in the seventh, as pinch runner Dylan Enwiller stole second and third before advancing home when Raymond Gil could not catch Michael Amditis’ throw at third. The throw beat Enwiller to the bag, but Gil could not keep it in his glove and the error allowed UNC to increase its lead to four.

Busch punctuated the win with a two-run homer that gave the Tar Heels a 9-3 lead in the eighth. The junior outfielder turned in a 2-for-3 day with a home run, three RBI, three runs scored and had a part in all three of North Carolina’s innings with multiple runs scored.