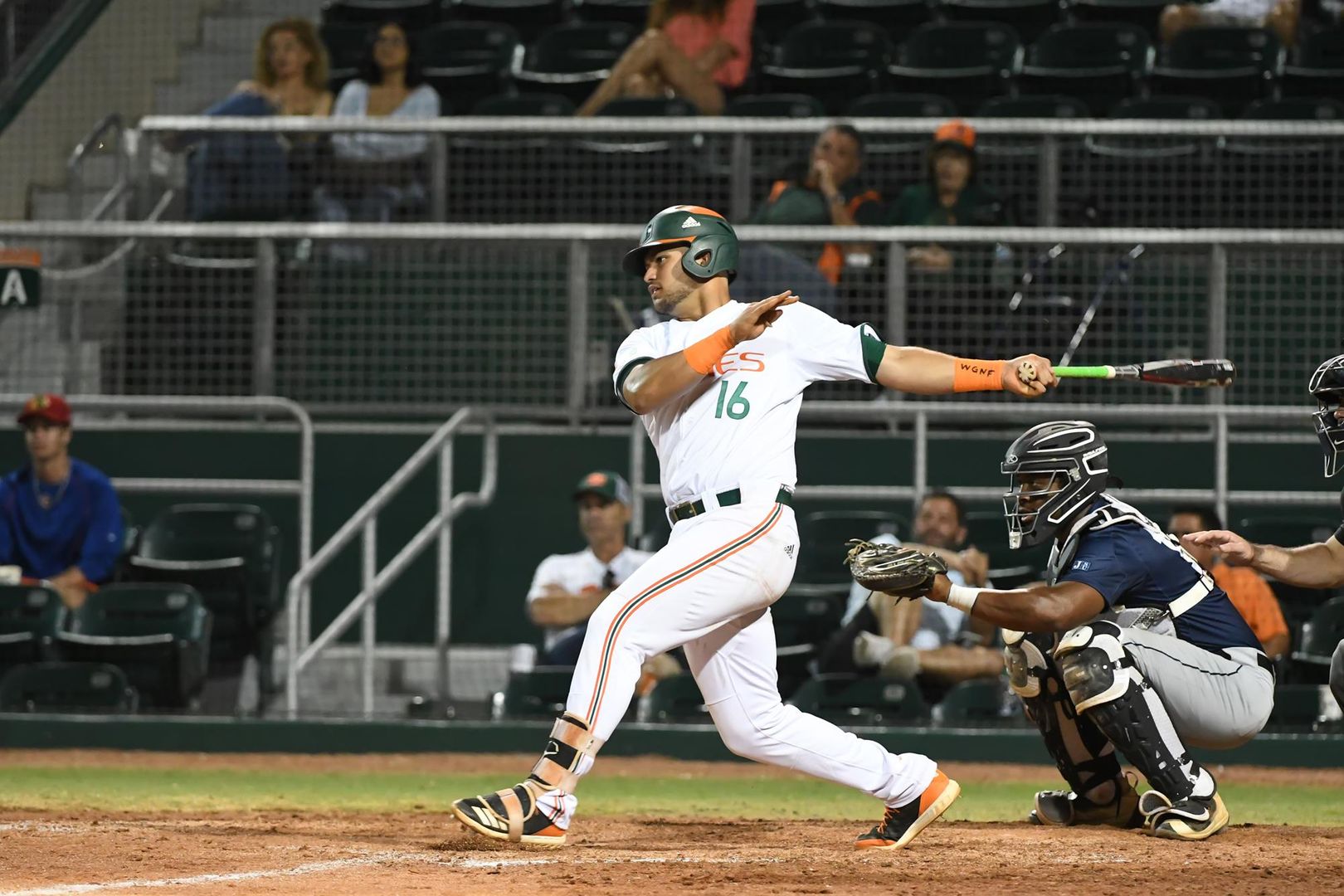 “Every win is a big one, but we are in the ACC and it sets the tone on Friday night to win that first game against their ace, who has had great numbers on the year,” head coach Gino DiMare said. “But it’s just one game. It’s Game 1, it’s over with and we’ve got to move on and be ready to play tomorrow.”

Stormy weather in Chapel Hill delayed the start of Friday’s game by an hour and it took the Hurricanes about an hour more to get their bats going against UNC starter Gianluca Dalatri. The junior right-hander entered the game with a miniscule 1.14 ERA over 23.2 innings, but the Canes smacked home a pair of runs in the fourth to take a 2-0 lead.

Freshman designated hitter got the rally started with a leadoff single before Alex Toral scorched a ball by the first baseman for a hit. Gil nearly hit a three-run homer, but his laser to left hit the top of the wall for an RBI double that put the Canes on the scoreboard. Dylan Cloonan followed with a sacrifice fly to left that sent home Toral and gave Miami a two-run lead on the road against one of the top pitchers in the ACC.

North Carolina answered in the bottom off the fourth, as freshman Aaron Sabato hit a solo homer to left field to cut Miami’s lead in half, 2-1.

An inning later, they made Miami pay for an error and tied the game at 2. Freddy Zamora’s errant throw to first allowed Brandon Martorano to reach and the Heels’ catcher advanced to second on a wild pitch before moving to third on a sacrifice bunt. Michael Busch singled him home with a base hit to left that evened the score.

But Miami charged back with four runs in the sixth, as Toral and Gil opened the inning with back-to-back singles that knocked Dalatri out of the game. The right-hander allowed four runs (three earned) on eight hits over five-plus innings and took his first loss of the season.

“Seven out of 10 guys got hits tonight and five different guys had RBIs,” DiMare said. “We made two great plays in the outfield with Cloonan making a diving play in left and then he robbed a home run in right. Toral had some picks. We played good in the infield for the most part and our bullpen at the end did a great job. It was a total team win and that’s what you want.”

Cloonan beat out of a chopper to the right side off lefty reliever Will Sandy to load the bases with no outs before Michael Amditis’ fielder’s choice to short pushed home Toral from third and put the Hurricanes back on top, 3-2

The Canes added another run in the sixth on a passed ball with the bases loaded that allowed Cloonan to score. Jordan Lala walked and Miami loaded the bases for a third time in the inning before Anthony Vilar pushed home the fifth run of the night on a bases-loaded walk and Zamora hit a sacrifice fly to make it 6-2 Miami.

But the Tar Heels put up a pair of runs in the bottom of the inning, loading the bases with no outs before pushing home Caleb Roberts and Sabato on consecutive groundouts to make cut Miami’s lead from four to two, 6-4.

Miami starter Evan McKendry earned his fourth win of the year after throwing a solid 5.2 innings against UNC. The junior right-hander held the Tar Heels to four runs (three earned), on six hits while striking out three and walking three.

Junior Greg Veliz threw another impressive pair of relief innings, striking out four and not allowing a hit to protect the Canes’ 6-4 lead in the seventh and eighth.

Hurricanes’ closer Daniel Federman shut the door in the ninth to earn his fifth save of the year and secure the victory in Miami’s ACC road opener.

“Those guys at the end were great,” DiMare said. “Veliz and Fed were the most valuable guys. They came in a crucial time and got it done from seven through nine.”