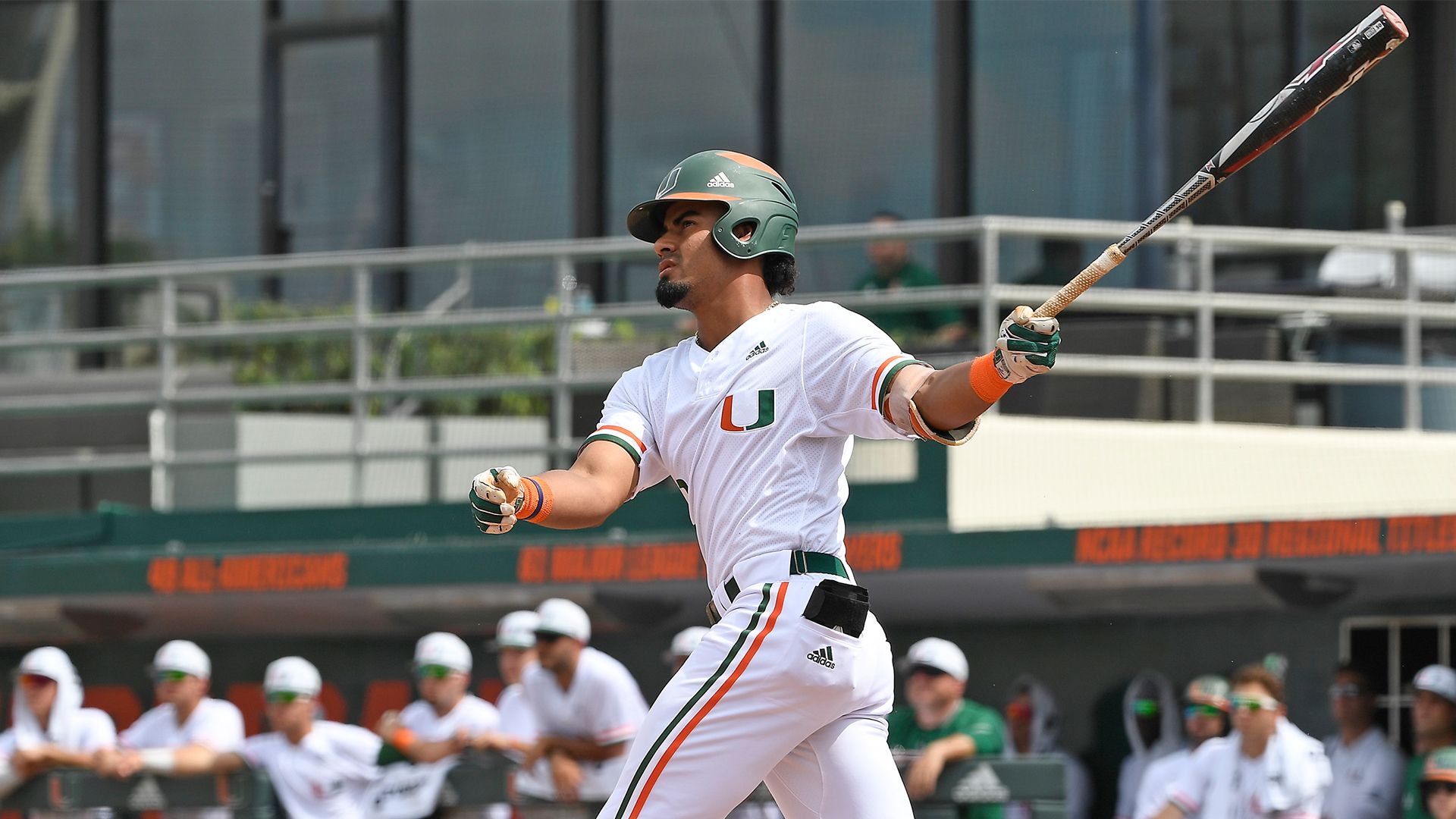 CORAL GABLES, Fla. – The wind was blowing out Sunday afternoon and the Miami Hurricanes hit a pair of homers to secure a 9-6 win over Georgia Tech.

Miami’s bats came alive in the series finale, as the Canes (12-3, 2-1 ACC) smacked 10 hits and put up nine runs to secure a series win in their first weekend of ACC play. The Hurricanes needed every bit of their offensive explosion, as the Yellow Jackets (10-6, 1-2 ACC) made a late charge in the ninth to try and steal a win on getaway day.

“It’s a good start, especially after losing the first game and it was a hard-fought where we almost had a chance to win it at the end in the last at-bat,” head coach Gino DiMare said. “For us to bounce back and win it in the last at-bat the next night, that makes that home run even bigger now because it gave us an opportunity to win the series and we did and that’s a great start.”

Georgia Tech’s Tristin English continued his torrid series against Miami, hitting a two-run homer in the first inning off Hurricanes’ starter Brian Van Belle. The blast was English’s third of the weekend and gave the Yellow Jackets a 2-0 lead.

But Saturday night’s hero Freddy Zamora stayed hot in his first at-bat Sunday, mashing a two-run homer over the scoreboard in left field that landed on the Cobb Stadium track and tied the game at 2-2.

“He’s definitely the best player in the series, for sure,” DiMare said. “Freddy has made some big strides lately. I can tell in practice and pregame, just his preparation has been outstanding. If he keeps that up, he could be the best shortstop in the country.”

In the bottom of the fourth, Adrian Del Castillo singled thru the right side and extended his hitting streak to 15 games to begin his UM career. The freshman is now tied with Esteban Tresgallo for the longest hitting streak to begin a Hurricane career since 2013.

Del Castillo’s base hit sparked a rally, as Raymond Gil followed with an RBI double to left that pushed the freshman designated home and put the Canes ahead for the first time on Sunday. Gil came around to score three batters later when Dylan Cloonan’s hard-hit grounder got past Austin Wilhite at short and the error allowed Miami’s third baseman to come home and give the Hurricanes a 4-2 lead through four innings.

Van Belle protected the lead he was given, allowing just two runs on six hits over a career-best 6.2 innings. The redshirt junior earned his team-leading third win and struck out four on the afternoon, but his most notable moment was starting a 1-4-3 double play with runners on first and second and no outs in the top of the second.

“It got me fired up,” Van Belle said. “As soon as the ball came off the bat, I knew I wanted to get it instead of letting it go to the second baseman so they could turn it. I felt like it was kind of slow and I attacked it, grabbed it and just spun and threw it on a line to make sure we had enough time to turn that double play.”

Miami turned three double plays on Sunday afternoon, with Van Belle benefitting from two of them. DiMare believes the Hurricanes defense was excellent in the weekend finale.

“It was the best defensive game we’ve played all year,” DiMare said. “We had three double plays and none of them were easy. One was hit to Ray and he got caught up in between but got his body in front, swallowed the ball up and turned two. [Anthony] Vilar’s was an unbelievable highlight reel play where he dove backhand side, somehow got it out of his glove to Freddy and Freddy had to turn it quick. And then with our pitcher, Van Belle, he made that play look very easy and it wasn’t an easy play.”

Vilar plated two more runs in the sixth, as the freshman ripped a 1-2 pitch from Willingham for a double off the left field wall that gave the Hurricanes a 7-2 advantage.

“It gives you a lot of momentum,” Van Belle said of the team’s prolific offense. “I feel like at any time in the game, anyone in the lineup from top to bottom can crank one and that’s exactly what happened in the first inning. I gave up a two-run bomb and then when we came up to bat Freddy cranked one and put us back in a good spot.”

With two outs in the Alex Toral crushed a solo homer off reliever Micah Carpenter that hit off the third deck of the parking garage beyond the right field fence to make it 8-2. But the first baseman’s team-leading eighth homer of the season was Miami’s sixth of the series and 23rdof the year, tying the 2018 Hurricanes’ total season homer tally.

“It says a lot about the job [Norberto Lopez] has done as a hitting coach and what [Brian Gabriel] has done as our strength coach and the work they’ve done getting stronger, but, most importantly, it says a lot about our players and how they’ve made a commitment,” DiMare said. “One of the things we stressed was that we needed to be better offensively and they’re working behind the scenes to make sure we are. They’re working their tails off doing early work on their own before practice and extra work after practice to get better and you can see the fruits of their labor coming to fruition. It’s amazing that we have tied that already.”

Miami’s final run of the day came in the eighth, when Georgia Tech reliever Jake Lee threw a wild pitch with the bases loaded that allowed Tony Jenkins to score after leading off the inning with a pinch-hit walk.

The Yellow Jackets mounted a ninth-inning rally, cutting a Miami lead from seven to three. But with two on and one out, right-hander Daniel Federman struck out Oscar Serratos and Cole Neuber to end the comeback attempt and wrap up Miami’s first ACC series victory.

The Canes will wrap up a nine-game homestand this coming Tuesday and Wednesday, as they welcome Jackson State to The Light for a midweek series. Both games are scheduled to begin at 6 p.m.