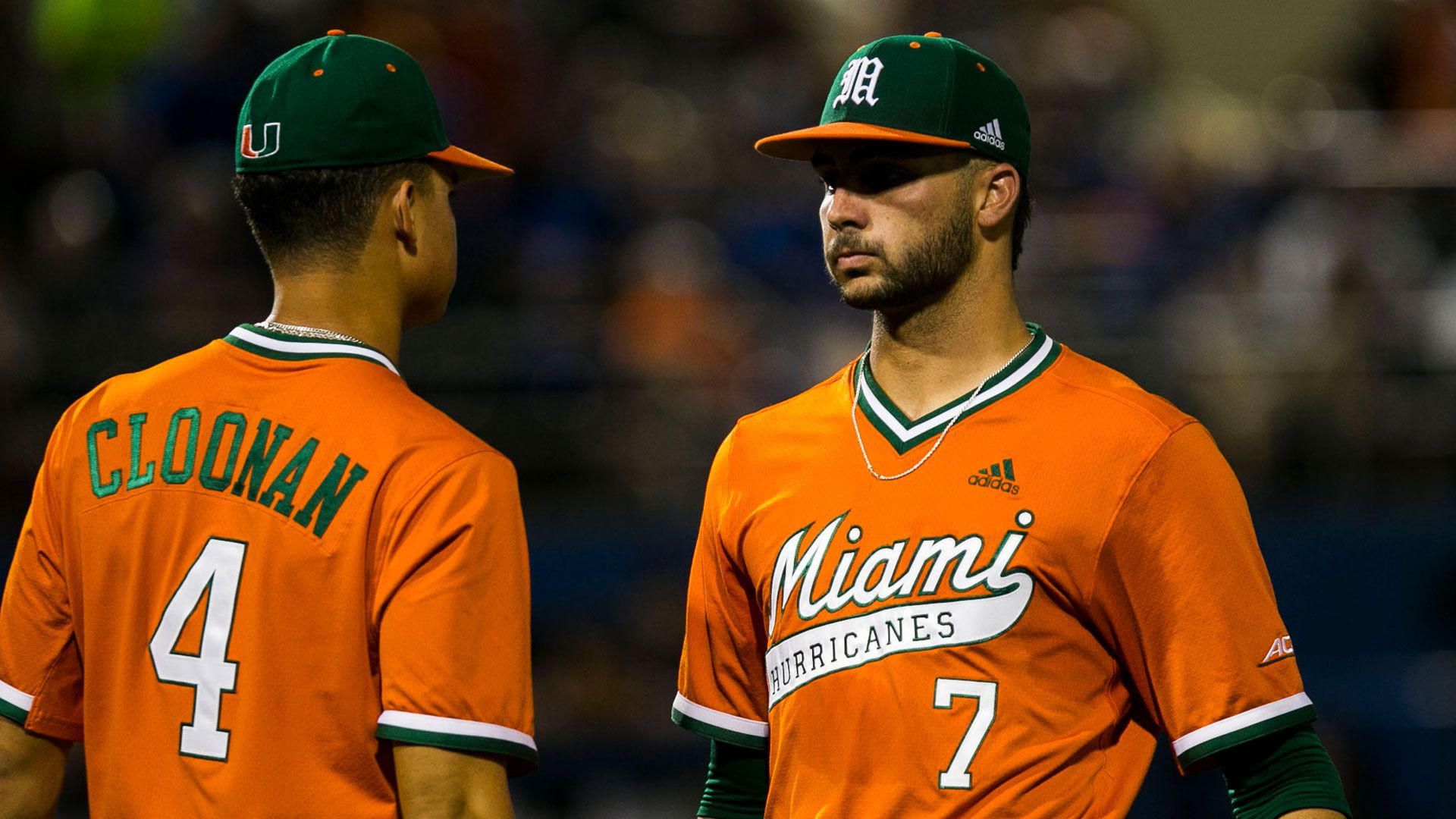 No. 4 Florida Rallies Late to Even Series vs. Canes

GAINESVILLE, Fla. – The Miami Hurricanes were nine outs away from a victory in Gainesville on Saturday night, but a four-run rally in the seventh inning sparked No. 4 Florida to even the series with a 9-3 win.

A three-run blast by Raymond Gil and 6.2 strong innings from starter Chris McMahon had the Hurricanes (5-1) in position for a series victory, but the Gators (4-3) mounted a two-out rally against freshman reliever JP Gates to come away with a victory.

“It’s disappointing the way we lost this game, certainly, because it got away from us,” head coach Gino DiMare said. “We have to clean that up because if we are going to win games throughout the year we are going to need our bullpen. We’ve got to turn the page and get ready to play tomorrow. The game is going to turn around on us quick here and we’ve got to find a way to get the job done and win the series.”

McMahon, who racked up seven strikeouts over 6.2 innings pitched, was replaced on the mound by Gates after a two-out walk to catcher Brady Smith. The left-hander came in and walked Brady McConnell and Austin Langworthy to load the bases and Wil Dalton delivered a game-winning triple to center that cleared the bases and put Florida ahead, 4-3.

“With Chris, we weren’t sure about bringing him back and we did and it worked out in our favor and then we got him out of there,” DiMare said. “[Daniel] Federman threw last night and we don’t have really a set closer, yet. We’ll solidify it at some point, but it’s early in the season and that’s hard to do unless you have veteran guys that you’ve already established and you know who those guys are and we don’t.”

The Gators added an insurance run one batter later, as first baseman Kendrick Calilao doubled home Dalton to make it 5-3 in favor of Florida. Tyler Keysor came in to relieve Gates and struck out Nelson Maldonado, but the damage was done and Miami trailed by two.

An inning later Florida loaded the bases with no outs against Keysor before he was lifted for right-hander Mark Mixon. The Gators added four more runs, sending nine hitters to the plate and put the game out of reach for good.

“Our bullpen, we’ve got to figure those things out,” DiMare said. “We felt like JP hadn’t pitched. He was fresh and even with righties, which they have a lot of, JP’s breaking ball is tough on righties. We thought that was that right matchup. It’s his first outing as a freshman in this environment and that’s not the easiest thing to come into. He got his feet wet very quickly, but at the end of the day, you have to throw strikes. Him and all the other guys that came in, they can’t walk people. You put guys on base and it opened up and got out of control there.”

Both starting pitchers were strong on Saturday night, as McMahon and Florida starter Tommy Mace each scattered three hits over the first five innings, but the Hurricanes finally got to Mace with two outs in the sixth, as the right-hander hit Adrian Del Castillo with a pitch and walked Alex Toral on four pitches before Gil crushed a 1-2 pitch deep over the wall in left to give the Canes a 3-0 lead.

“The home run was huge,” DiMare said. “I told them when we hit that home run that we’ve got to win the game. It’s late in the game. It’s the sixth inning. In the bottom of the sixth, I told them we’ve got to get a shutdown inning and we didn’t. We let them get a run and that kept them in the game and obviously, it kept them up and their emotions up. That’s something that’s very important. When we put up runs, we’ve got to have a shut-down inning and put a zero up if you’re going to be a winning team and we weren’t able to do that.”

The blast from Gil was a redemptive moment for the sophomore third baseman, as he came up in a big spot in the fourth inning and had some tough luck on a hard-hit ball.

With Freddy Zamora on first, Del Castillo crushed a one-out double to the left field wall to give Miami runners on second and third. The play was reviewed, as the ball hit off Langworthy’s glove and may have hit the fence above the outfield wall, but video replay was inconclusive and the play stood as a double.

Florida elected to intentionally walk Toral to load the bases and the decision proved wise, as Gil smashed a hard-hit grounder to McConnell at short and the Gators turned an inning-ending 6-4-3 double play to quell the Miami threat.

After the play, Dalton exchanged words with Toral at second and both benches emptied. Warnings were issued to both teams and Dalton led off the bottom of the fourth with a double to left.

Dalton moved up 90 feet after a fly out to right by Calilao, but McMahon blew a fastball by Maldonado for his fifth strikeout of the night and got a fly out to left to end the threat and keep the game scoreless.

The Gators finally got a run across against McMahon in the sixth, as Langworthy led off the inning with a ground-rule double and scored two batters later on a sacrifice fly to right by Calilao. Maldonado followed with a two-out triple, but McMahon struck out Cory Acton looking to end the threat.

Mace picked up the win on Saturday after throwing seven solid innings for the Gators, The sophomore right-hander allowed three runs on five hits, while striking out four and walking four.

“I told them I have all the confidence in the world against whoever we play,” DiMare said. “At the end of the day, it’s still one-to-one. We are 5-1, we are off to a good start and you’re not going to win every game. We just have to make sure we come back ready to play tomorrow and try to win the series.”