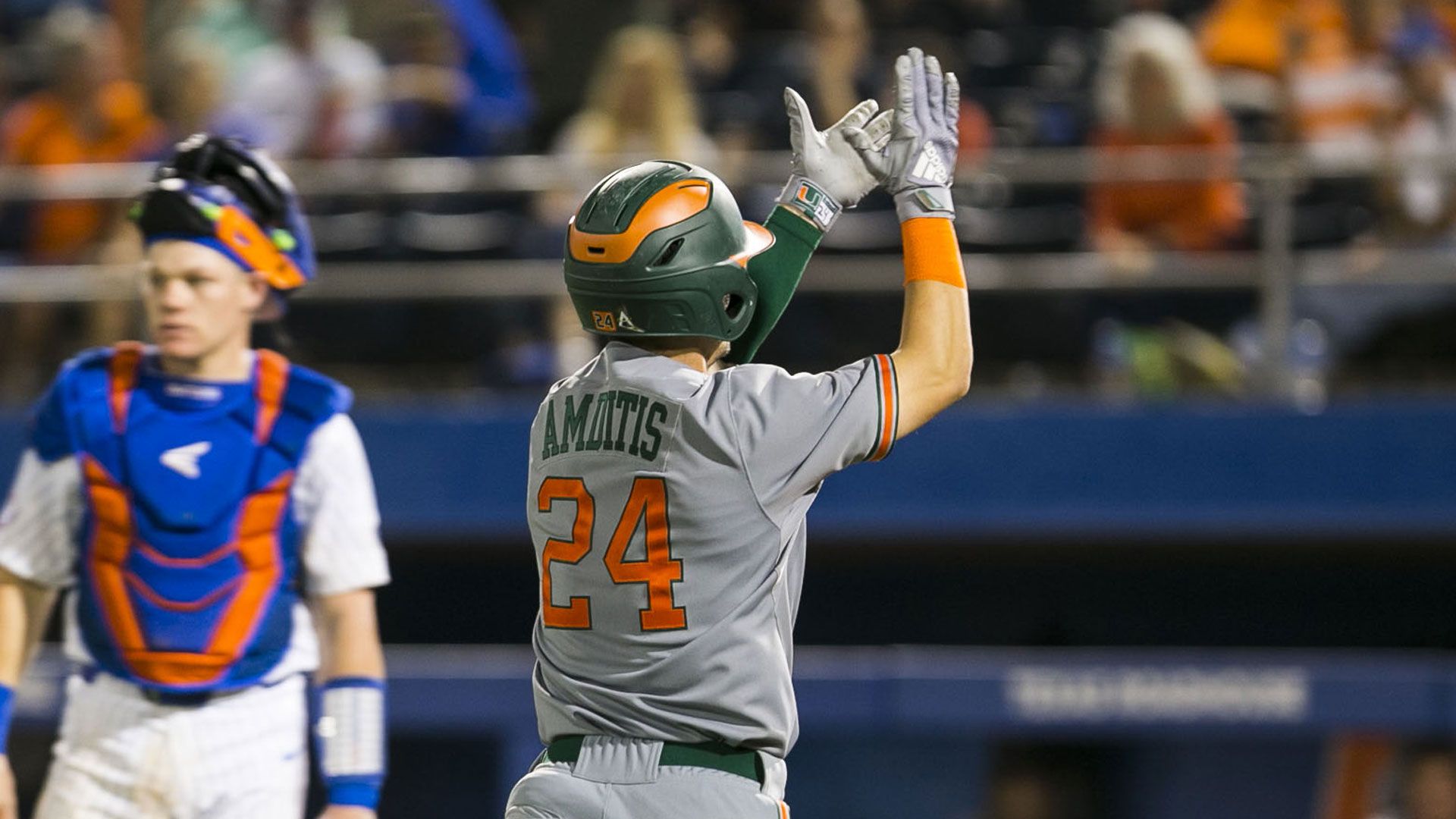 The redshirt sophomore catcher, who entered the game with just one hit in 10 at-bats this season, was 2-for-4 with the game-winning homer in the seventh inning to help the Hurricanes (5-0) secure the series-opening victory over Florida (3-3) on Friday night at McKethan Stadium.

“It was pure excitement,” Amditis said. “It felt amazing to get my first home run in that spot, especially with all the injuries that have happened. It just felt good to help the team in the biggest way possible.”

The Hurricanes scored first for the fourth time in five games this season, as the sophomore first baseman hit his national-leading fifth homer of the season. With a runner on in the second inning, Toral turned on a 2-2 pitch from Florida starter Tyler Dyson and crushed it over the fence in right field to put Miami ahead, 2-0.

“It was the best feeling to get us ahead early in the game and give us momentum,” Toral said. “They’re a great team and this was a big win for us. We got out there tonight and took the first one. That’s always huge. Now we have to come out tomorrow with the same amount of energy and intensity that we did today.”

“The past few years, I’ve had some success against them,” McKendry said. “I try to just treat it as another game, go after them and attack early. The first couple of innings I felt like I didn’t have my command, but I settled in and relaxed and felt  real  good.”

McKendry held the Gators hitless over the first three frames before Brady McConnell led off the fourth with a double to right. Three batters later McConnell came around to score, as Miami right fielder Luis Tuero could not reel in a long fly ball to the warning track that resulted in a RBI triple by Kendrick Calilao .

“Outstanding,” head coach Gino DiMare said. ” That’s two years in a row where he dominated. He threw seven innings. The change-up was going good and he located his fastball when he needed to. There were a  couple  crucial situations where he threw a slider, but the change-up certainly is his bread and butter. He’s so poised. He’s the perfect guy to set the tone for the series.”

The Canes knocked Dyson out of the game in the top of the fifth, as Jordan Lala walked and Tony Jenkins reached on an error by McConnell at short. The Hurricanes, who worked deep counts against Dyson all night, ran up the Gators’ starter’s pitch count to 92 through 4.0+ innings.

“That’s kind of been our at-bats so far this season, a lot of 3-2 counts and 3-1 counts, going deep and fouling balls off,” DiMare said. “The way I look at it is they’re taxing on the pitcher and there is a lot of effort to the pitcher having to get through it.”

In the sixth, Florida evened the score at 2-2. Austin Langworthy led off the inning with a base hit and McConnell followed with a double to left before Nelson Maldonado’s RBI groundout to third pushed home Langworthy to tie the game.

But the Canes answered right back, as Amditis belted a 2-0 fastball from reliever Jordan Butler and put it over the wall in left-center to lead off the seventh and put Miami back ahead, 3-2.

The Canes added another run in the seventh when Zamora dropped a beautiful drag bunt with two outs in the inning that pushed Lala home and doubled the UM lead, 4-2.

“It’s clear that we’re a much better team this year,” McKendry said. “We come out with a ton of energy, we’re swinging the bats well, everybody is aggressive. You’d think it’s a whole new team compared to last year with the way we are swinging the bat. It definitely makes me more comfortable out there knowing that even if I do get in some trouble, chances are we are going to come back and score.”

Miami added insurance in the eighth, as Amditis hit a high pop-up that second baseman Blake Reese couldn’t handle. The error put Miami’s catcher on second with one out in the eighth and two batters later Jenkins smacked a two-out single to center that pushed Amditis home and gave Miami a three-run lead.