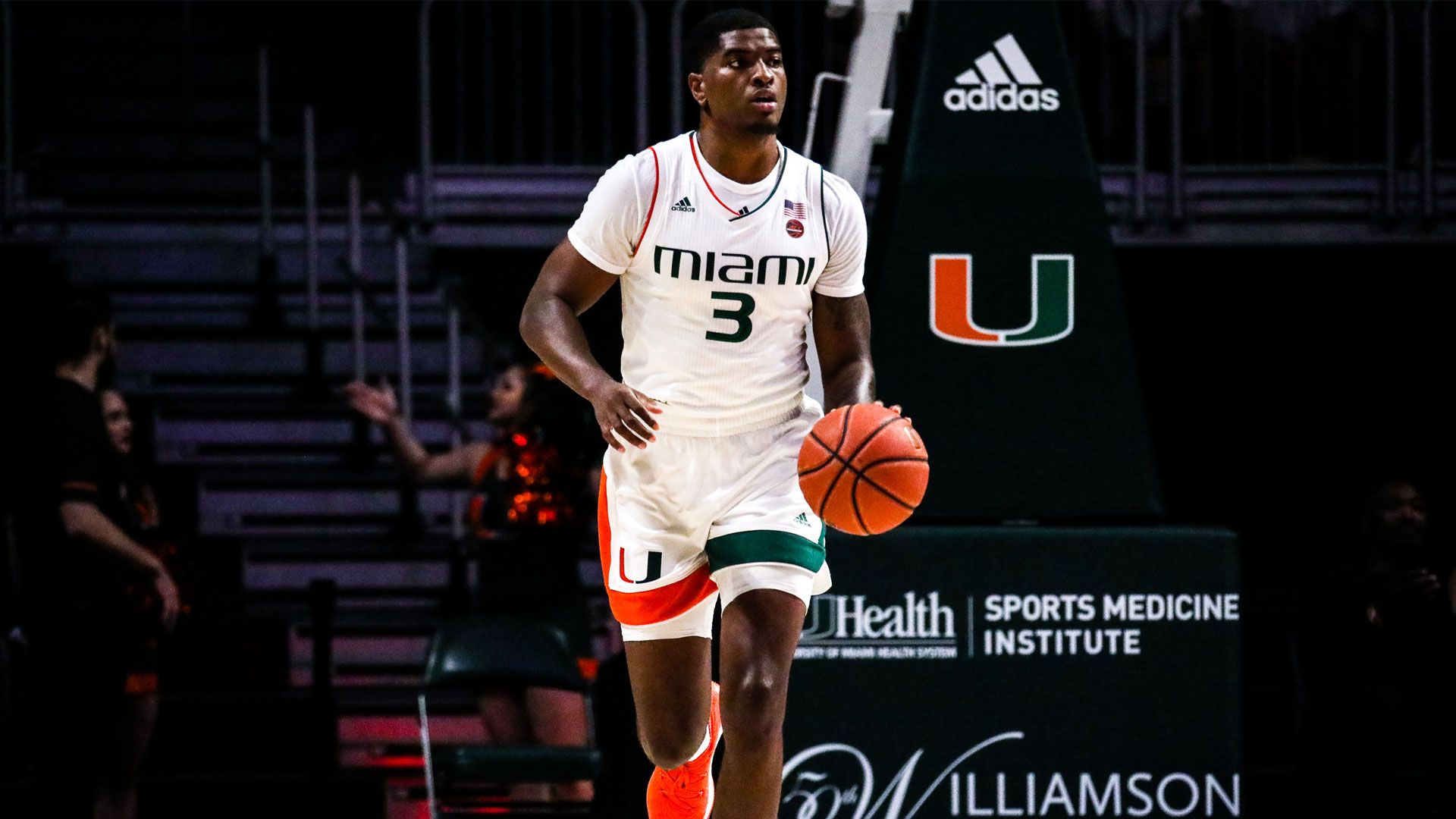 CORAL GABLES, Fla. – In his 250th game at the helm for the University of Miami men’s basketball team, head coach Jim Larrañaga and the Hurricanes returned from a 15-day break to top Houston Baptist, 80-73, Wednesday night at the Watsco Center.

The Canes (6-4) were led by a pair of fourth-year seniors, as Anthony Lawrence II finished the night with 17 points and five rebounds, while Ebuka Izundu recorded his fourth career double-double. The center closed out the night with 15 points and 11 rebounds, while recording a career-high 33 minutes of playing time and matching his career high with four blocks, a mark previously achieved during the team’s early-season victory over Stephen F. Austin (Nov. 13, 2018).

The seniors were joined in double figures by sophomore Chris Lykes (14 points) and junior Dejan Vasiljevic (13 points), as both guards also dished out a co-team-high four assists and pulled down five boards.

Offensively, the Hurricanes opened the game shooting an efficient 15-of-28 from the field and 8-of-17 from beyond the arc in the first half. Moments after the opening tip off, Lawrence found a wide-open Vasiljevic standing alone at the top of the arc, as the junior kick started a 9-0 run and four consecutive made treys for UM. Defensively, the Hurricanes held the Huskies to 43.3 percent shooting (13-of-30) from the field, as Miami entered the break holding a 40-33 advantage.

Out of the locker room, the Huskies began to claw their way back opening the second stanza on a 15-7 run to jump in front 48-47 at the 13:26 mark, Houston Baptist’s first lead of the night. However, on the ensuing possession Lawrence drained his fourth three of the night to give Miami a lead it would not look back on.

Maintaining a 60-54 lead with 9:10 remaining in the game, Larrañaga made a defensive adjustment by calling for a full court press. The change resulted in back-to-back Husky turnovers and a quick five points for Vasiljevic, forcing Houston Baptist to use a timeout.

Following the change in scheme, the Hurricanes held at least a seven-point lead for the remainder of the night to seal the victory.

Miami returns to action Saturday afternoon, as the Hurricanes are set to welcome Florida Atlantic to the Watsco Center at 2 p.m. The game will be broadcast live on ACC Network Extra.

Game Notes
• Head coach Jim Larrañaga coached in his 250th career game at Miami.
• Miami is 4-1 at home this season and has won 42 of its last 48 games at the Watsco Center.
• Miami hit 11 3-pointers, tied for its second most this season.
• Miami hit eight 3-pointers in the first half, more than it hit in any of its five previous games.
• Zach Johnson scored nine points and now has 1,476 career points (1,344 at Florida Gulf Coast, 132 at Miami).
• While playing a career-high 34 minutes, Ebuka Izundu recorded his fourth career double-double, including his third this season, with 15 points and 11 rebounds. He also matched a career high with four blocked shots.
• Anthony Mack set career highs in points (6), rebounds (4) and minutes (17).
• Junior forward Dewan Hernandez was withheld from competition for the 10th straight game as the University and the NCAA review his eligibility.

Miami Head Coach Jim Larrañaga
Opening statement…
” I thought we got off to a great start. We made three threes very early. We moved the ball. Each of those [threes] was with an assist. We’ve always emphasized getting 16 assists or more, we had 17 tonight. I don’t know what our largest lead was in that first half, but we got it up to double digits and then we had some careless turnovers that allowed them to quickly gain some momentum. In the second half, they went on a really good run and took a one-point lead, we took a timeout and did a pretty good job defensively and got fouled. Our intentions were to press them a little bit and as a result, the press worked. We got five points, we were up four and DJ got a layup and a three. Now we’re up nine and the pressure is on them so they called a timeout and we were able to keep the lead for the remainder of the game.”

On Ebuka Izundu…
“There’s one stat that really stands out. He had zero fouls, which allows us to leave him in the game and when he’s playing like he did… He’s out of foul trouble and plays over 33 minutes a game, he’s our only big guy. He’s very good in and around the basket. He ended up six for eight, three for four, 15 points and 11 rebounds and that kind of contribution is vital to be successful because we have no one else who can play inside with his back to the basket.”

On the depth and the importance of inside play down the stretch…
“We don’t have inside depth. It’s really important for the opponent. They can take advantage of that. By Ebuka not being in foul trouble and being able to keep him in the game really helps us. He picked up a cramp, he was blocking a shot and picked up a cramp and so he went out for those five minutes and then we were finally able to put him back in. It really puts pressure on us because Sam Waardenburg is not a post player, not a big man. He’s tall, he’s just not a big burley guy. He’s thin and has gotten stronger in his two years here, but he’s more of a stretch-four than he is an interior guy.”

On the offense tonight…
“We’d be very happy with those numbers every night. The one thing and this is something we calculated and ended up being to Houston Baptist credit, but we try to double-team their big guy. I don’t know if you saw it at the beginning of the game. Why? Because that guy is a really good scorer around the basket and we were afraid Ebuka would foul him. So we double teamed him but he hit the open man and they started hitting threes. So in the first half they already hit six threes and we’re like ‘might have been a mistake.’ In the second we didn’t double him and Ebuka was still able to stay out of foul trouble. We did a good job of not putting them on the foul line too much. They ended up eight for 14.”

Houston Baptist Head Coach Ron Cottrell
Opening Statement…
“Obviously, they started out on fire with the four threes to start the game. That put us in a hole right off the bat. It kind of got us on our heels, we had to try and regroup a little bit. I was proud of our guys fighting our way back into it. It was a hard fought game throughout. They are obviously so athletic and long, but I was proud of the fact that our guys kept scrapping and clawing to stay in the game. I felt like we were in a pretty good spot. And then all of the sudden there at about the nine and a half minute mark, they jumped in a press that they haven’t shown all year. And for about 30, 40 seconds there, it went from a four point game to like an 11-point game, I think, and that was pretty much the difference in the game. From there we were fighting to try and get back in it. So, happy with our guys, I thought they played really, really well. Shot the ball really well, especially from the three. You know, [Anthony] Lawrence hit some great 3-point shots. I thought we were there a couple times but he still knocked them down.”

On taking a one-point lead before the press defense by Miami came into effect…
“Obviously they hadn’t played in two weeks. So, I am sure they…you know, any of us coaches, we start doing different things and tinkering with things and putting things in. The 1-2-2 press was something we had not seen. And we are a team that likes to get out and push the ball, and really get out and try and challenge the defense in transition. And they used that [the press] to slow us down and get us out of our rhythm. They got a couple steals out of it and took us out of sync, basically.”

On being an opposing coach, and not knowing whether or not Miami junior forward Dewan Hernandez will play…
“We had him in our scout, just in case. And kind of kept our eye out on what we thought might be coming, so we would know what to talk about. We already had everything written up and had film and everything prepared so if we got word yesterday or whatever, that he was going to be ready to go, we would add it in to what we had for our guys. But yeah, you always wonder when somebody that important is out of the lineup. When are they going to pop up on you? You hope it’s not you who gets it [chuckles]. But we prepared for it.”

On the experience the team gets out of playing a Power 5 school…
“You look at our schedule, and who we played. Even go back at the last four or five years, we played this type of schedule every year. I think it is important for our guys to be challenged, to face adversity in every way. Whether it is the crowd, the opponent, the officials, whatever. I think it makes you tougher for conference play. Our guys are understanding the situation as well as any team I’ve had. They know that they are fighting uphill battles some nights. But obviously the Wake Forest game was a great indication of us fighting through and actually getting a win at the end. I thought tonight, we kept fighting and put ourselves in a position where a couple things go our way, we might be in that position again. But they didn’t. But those are important learning experiences for our team, there is no doubt.”