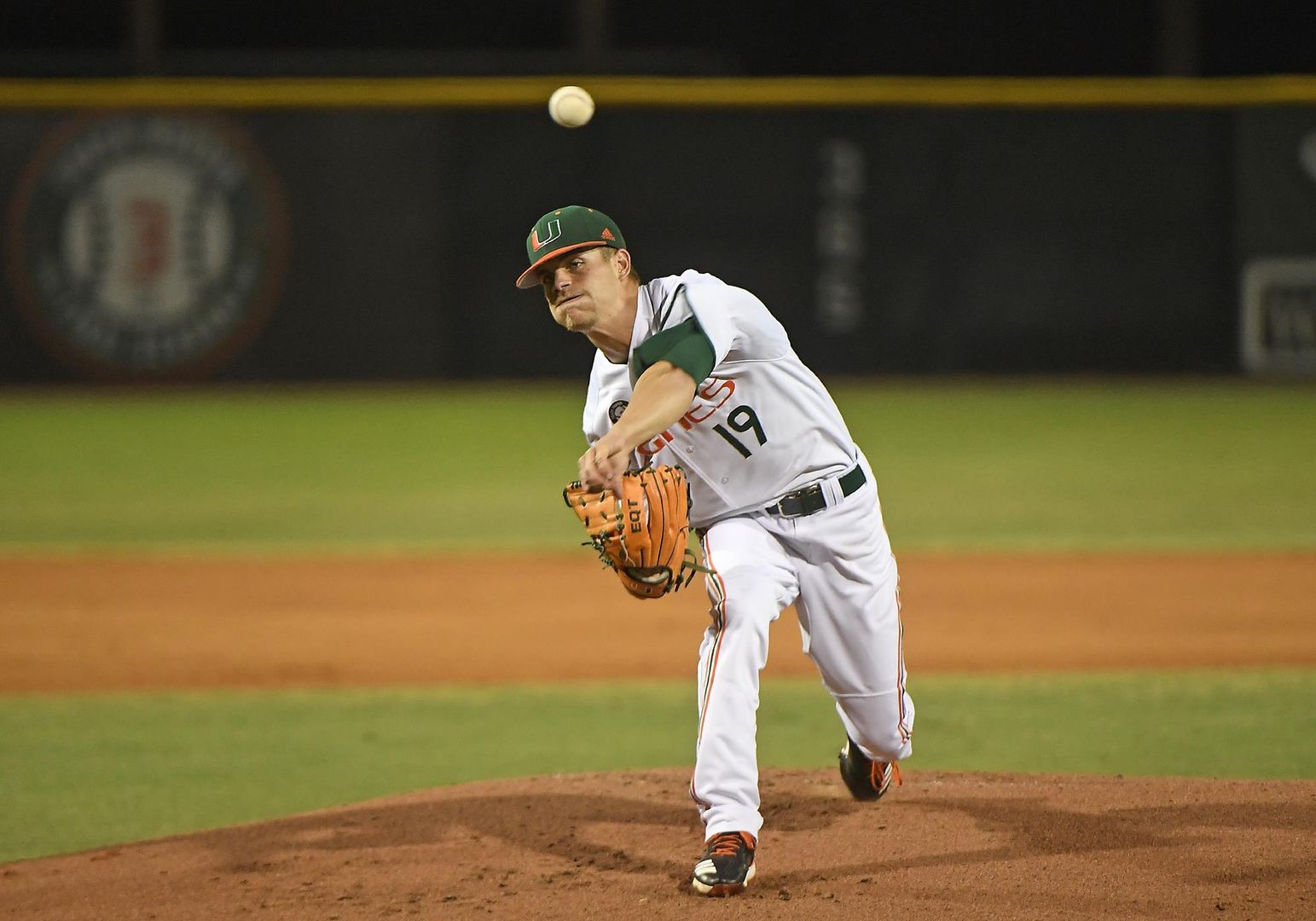 Bargfeldt Tosses Shutout in Win Over BC

CORAL GABLES, Fla. – If it was the last start of his career at Mark Light Field, Jeb Bargfeldt certainly made it count.

Toeing the rubber in Miami’s final regular season series, the senior co-captain tossed the first complete game shutout of his career in a 3-0 victory over Boston College Thursday night.

“I knew this was going to be my last time, barring a miracle here, so obviously this is a special one – and I wanted to make it special,” Bargfeldt said. “Luckily, I was able to do that.”
That he did, as Bargfeldt (4-4) tossed the third complete-game effort of his career.

The Hurricanes (26-25, 15-13 ACC) plated a run in the first, added another on a solo homer from freshman Willy Escala, and extended their winning streak to nine straight games in Jim Morris’ final weekend series.

Everything was working for the Owasso, Okla., native, who gave hugs to every teammate following the win and was saluted from those who remained of the 2,132 fans on a rain-soaked night.

“I was able to get ahead with the fastball and work off that,” Bargfeldt said. “Whether it be changeup or cutter, or even mixing in the curveball a little bit, just to be able to have all those pitches going really helped me out. It’s no lie that the defense made some spectacular plays along the way.”

Bargfeldt struck out seven batters, allowed just two walks and threw 118 pitches in one of the most dazzling appearances of his two-year Miami career on a soggy night at The Light.

“It’s going to be a crazy weekend continuing on from here with the rain, and you have to be ready to play,” Bargfeldt said. “You have to come out with guns hot and do what you need to do to win.”

The complete game effort was the second of Bargfeldt’s season and sixth by a Miami pitcher this year.

The Hurricanes needed just two plate appearances to take the lead against the Eagles (17-31, 7-21 ACC).

Freshman Freddy Zamora opened the game with a single on the first pitch he saw from Jacob Stevens.

Escala doubled Miami’s lead in the third with a solo shot that just cleared the fence in left for his second home run of the year.

That was more than enough for Bargfeldt, who retired 16 of the first 17 batters he faced and allowed just two singles on the night.

Bargfeldt, who struck out at least six batters for the fifth straight start, continued his recent run of dominance with another sparkling performance.

Over his past five starts, Bargfeldt has struck out 39 batters in 38.2 innings and recorded a 1.62 ERA.

Stevens (3-7) delivered a strong performance of his own, allowing just the two runs in seven innings. He struck out nine, walked five and threw 118 pitches in his final start of the season.

The Hurricanes added an insurance run in the eighth on a wild pitch that scored junior Danny Reyes, helping extend the nation’s second-longest active winning streak.

“Just playing with confidence,” Bargfeldt said about the team’s winning streak. “Guys going up there, it almost seems like guys know they’re going to get it done, whether it’s offensively, out of the bullpen or starting…we’ve been able to build up some momentum. This game is a lot easier when you have confidence.”

The Hurricanes and Eagles return to Alex Rodriguez Park at Mark Light Field Saturday for Game 2. First pitch for the contest, slated for broadcast on ACC Network Extra, 790 The Ticket and WVUM 90.5 FM, is slated for 7 p.m.