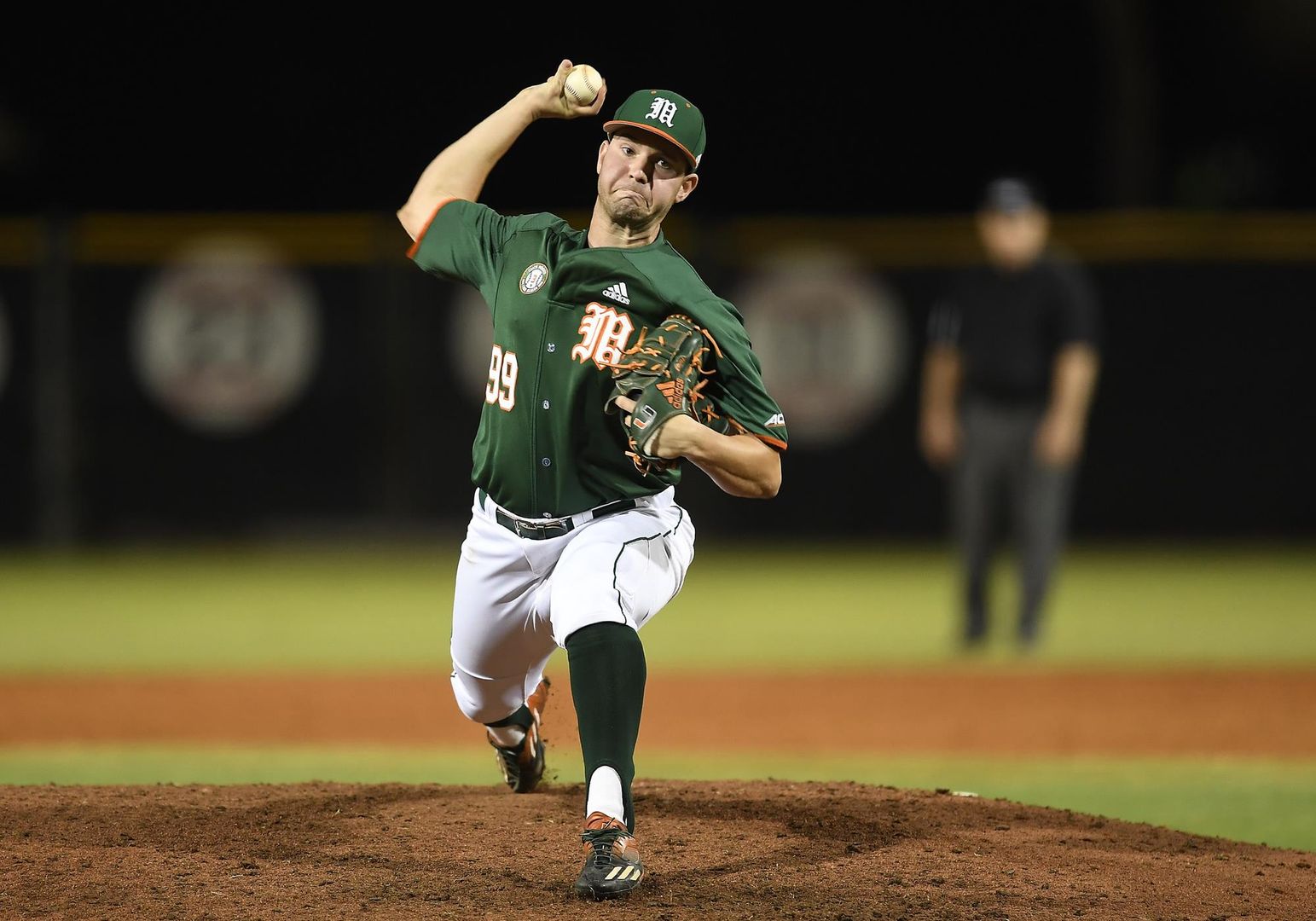 BLACKSBURG, Va. – The Hurricanes would be deterred, but they would not be denied.

Virginia Tech tied the series opener with two runs in the bottom of the ninth, but Miami ultimately prevailed, 5-4, in 12 innings to extend their season-long winning streak at English Field at Union Park.

Redshirt senior Cooper Hammond closed out the game, entering with one out in the 12thand inducing a game-ending double play turned by late defensive replacement Tyler Paige to pick up his fourth save.

“A lot of guys came into play tonight – it was really a team win,” head coach Jim Morris said. “Our pitching staff did a really good job, and Jenkins came up with the winning run on the hit by Romy.”

Bargfeldt, who had tossed three straight quality starts for the Hurricanes, made it four straight with another gem Friday.

The Owasso, Okla., native allowed two runs in the first inning on a long home run, but surrendered just two hits the rest of the way in another sparkling outing.

He struck out seven – his fourth straight start with at least six strikeouts – and helped Miami win its sixth straight game against its ACC Coastal Division counterparts.

With the victory, the Hurricanes improved to 12-1 in their last 13 games against the Hokies.

Miami entered the ninth leading, 4-2, but Stevie Mangrum’s two RBI single to left tied the game. Neither team was able to string much offense together in extras, with Miami freshman Daniel Federman delivering a strong performance out of the pen.

Federman (2-4) tossed 2.1 scoreless innings, needing just 29 pitches to get through seven crucial outs before Hammond recorded the final two on a groundball from Sam Fragale.

The Hurricanes tagged Virginia Tech reliever Andrew McDonald for the deciding run in the 12th.

Jenkins opened the rally with a one-out single to right, and on ball four to freshman Isaac Quinones, a throw from catcher Joe Freiday, Jr., sailed into center on an ill-advised decision to nab Jenkins.

Gonzalez came through in the clutch, knocking a pitch from Scherzer up the middle to plate Jenkins, who advanced to throw on the error charged to Freiday.

“It felt great to get out of here with a ‘W’ – much-needed for us,” Gonzalez said. “I was trying to get a pitch over the plate and put a good swing on it. He threw me a curveball right down the middle, low in the zone.”

Trailing 2-0 after a first-inning homer from Fragale, the Canes responded with a three-run fourth where they chased Virginia Tech starter Ian Seymour to take a lead.

Seymour (3-3) issued three straight walks – to Jenkins, Quinones and Gonzalez – to load the bases with no outs.

Junior Danny Reyes capitalized on the early scoring chance, crushing a 2-2 pitch from Seymour off the wall in left for a long RBI single.

On the very next pitch, Seymour plunked freshman Dylan Cloonan to force in the tying run.

“It feels great,” Gonzalez said. “We’ve grown tremendously as a team. We just have to keep it going and get ready for tomorrow.”

Freshman Freddy Zamora (2-for-6), Gonzalez (2-for-5) and Reyes (2-for-6) all recorded multi-hit efforts in the win. Zamora reached base for the 16thstraight game, while Cloonan extended his career-long hitting streak to seven games.

“A lot of guys came into play and we had a big team effort to win that game,” Morris said. “It was a big win for us as a club.”

The two teams return to English Field Saturday for Game 2 of the weekend series. First pitch for the contest, slated for broadcast on ACC Network Extra and WVUM 90.5 FM, is set for 3 p.m.