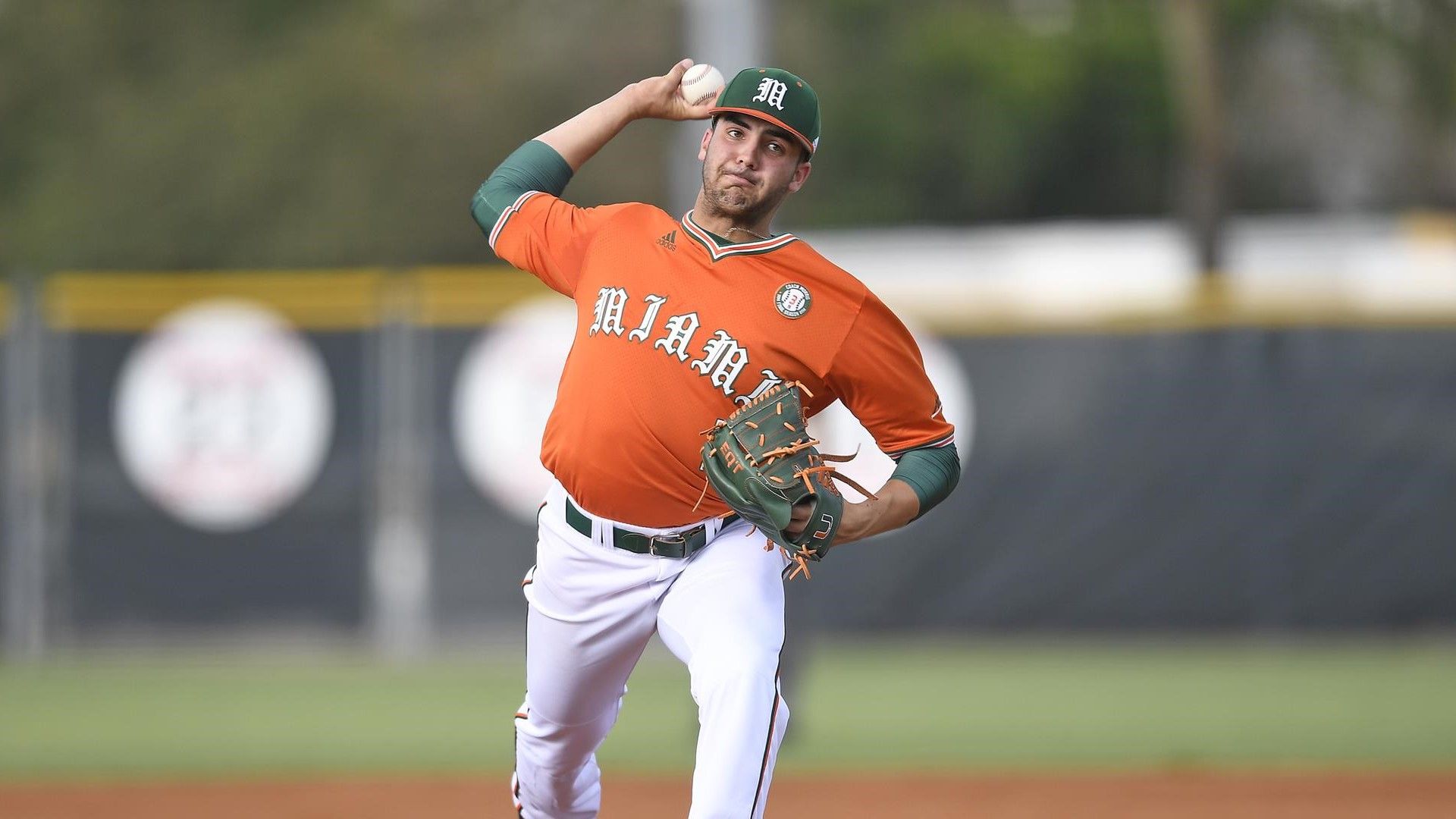 Bats Back Dominant McMahon In 8-1 Win

McMahon, who struggled with control in his first start last Wednesday, was much more efficient in a sterling effort to pick up the first win of his career.

The Pennsylvania native, who missed the first 25 games of the spring while recovering from offseason meniscus surgery, showcased an arsenal that overwhelmed the Eagles (25-10) and evened the season series.

After allowing a leadoff triple in the third, McMahon retired 18 of the final 19 batters he faced in front of 2,197 fans.

McMahon allowed just two hits with no walks and eight strikeouts in the best outing of his young career.

“It felt great out there. I got in a groove, definitely, after those first two innings,” McMahon said. “I had a lot better command of my fastball tonight than in my previous outings.”

The freshman righthander threw 66 of his 89 pitches for strikes.

The Hurricanes (16-20) scored a pair of runs in each of the first two innings to jump out to an early 4-0 lead in support of McMahon.

FGCU was held to just three hits on the night, while freshmen Freddy Zamora (3-for-5, three runs) and Gabe Rivera (3-for-4) led the Miami offense.

The two teams meet in the season rubber match on Wednesday, May 9 at Mark Light Field.

Zamora, who singled to open the first inning for the Hurricanes, moved to third after a hit batter and wild pitch and would score on an RBI groundout from junior Romy Gonzalez.

Gonzalez stole second and scored on the first RBI from junior Danny Reyes since February 18 on a single through the left side that doubled UM’s lead to 2-0.

Reyes, who returned in Miami’s last series at Clemson after missing 25 games with a thumb injury, finished 1-for-4.

The Hurricanes tacked onto their lead with two more runs in the second. With freshman Alex Toral on first, Zamora doubled down the left field line to push Miami’s advantage to 3-0 and chase FGCU starter Peyton Gray.

McMahon (1-0) allowed a leadoff triple to Marc Coffers in the third but limited the damage to just an RBI groundout, keeping Miami’s lead at a comfortable 4-1.

Following the triple to Coffers, McMahon shut the Eagles down. Outside of a hit batter to open the fifth, McMahon was unhittable over his final five frames.

“The guys played great defense behind me tonight,” McMahon said. “I let them put the ball in play. I had a handful of strikeouts but they played pretty behind me. It was a big win.”

Gray (2-2) allowed three hits and four runs in just 1.1 innings. He walked two and threw 43 pitches before being relieved by Gruszecki, who pitched 3.1 innings in relief.

Miami tacked onto its lead with an RBI triple from Rivera in the fifth and added three runs of insurance in the eighth.

With runners on the corners and no outs, freshman Raymond Gil recorded a pinch-hit sacrifice fly to bump Miami’s lead to 6-1. A wild pitch from FGCU reliever Bryan Wilcox scored Michael Amditis for the second run of the inning and an RBI groundout from Tyler Paige capped the game’s scoring.

The Hurricanes continue their five-game homestand Friday with their series opener against visiting Pittsburgh. First pitch for the contest, slated for broadcast on ACC Network Extra, 790 The Ticket and WVUM 90.5 FM, is set for 7 p.m.

“That series win at Clemson was huge. That shows the type of team we can be…we can battle with anyone,” McMahon said. “Today was a good win to keep the momentum going, now we have to do it against Pitt this weekend.”