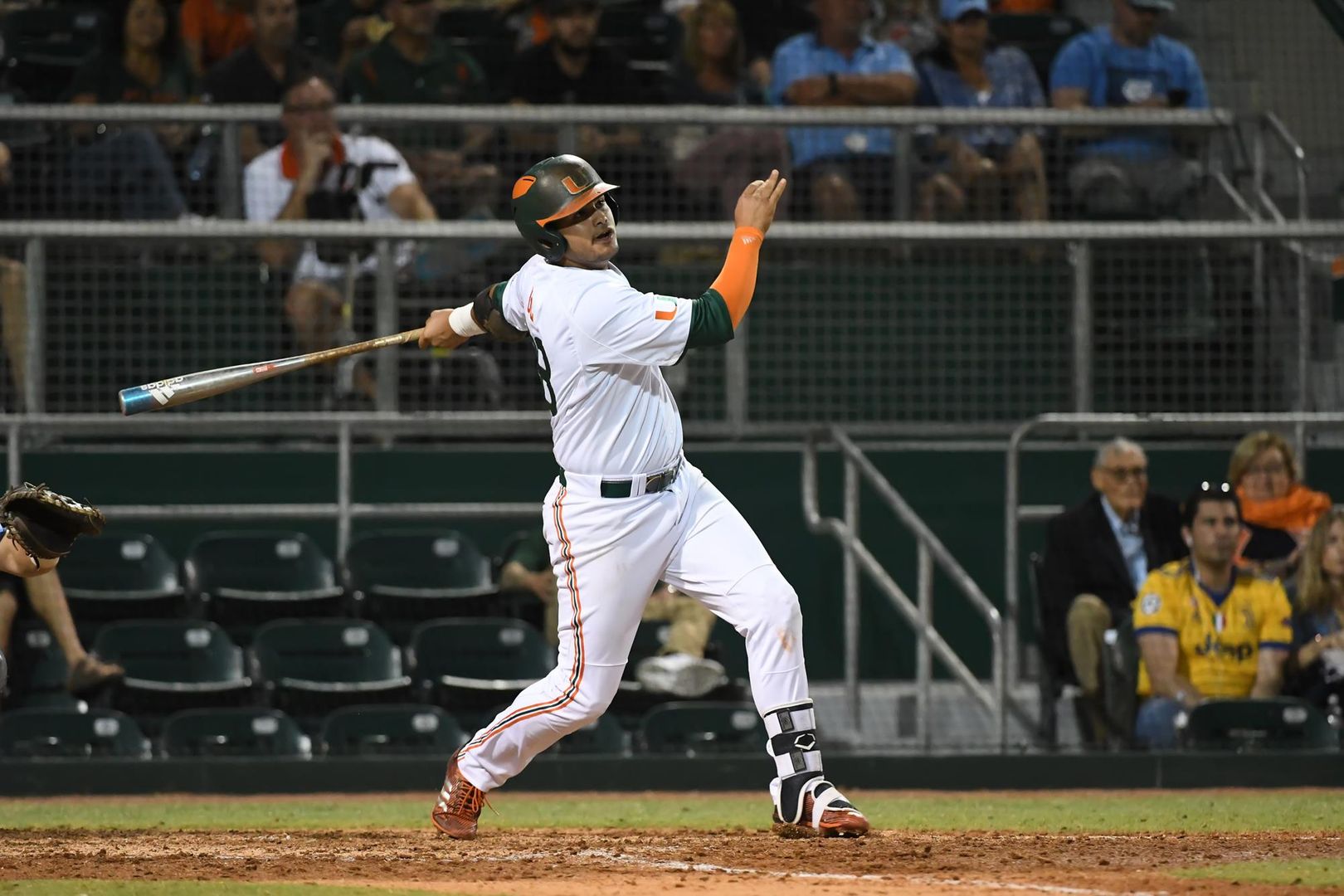 CORAL GABLES, Fla. – Miami rallied in the 11thbut came up short in the 12th, falling to visiting North Carolina, 8-4, Friday night in an extra-innings affair at Alex Rodriguez Park at Mark Light Field.

The Tar Heels (20-10, 9-4 ACC) pulled ahead, 4-3 with a run in the 11thbut Miami responded on an RBI single from freshman Gabe Rivera in the home half of the inning.

Rivera’s single – his third hit of the night – plated senior Michael Burns, who raced home from second and was helped by North Carolina catcher Cody Roberts, who could not corral a throw from Ashton McGee.

But Hurricanes (12-17, 6-7 ACC) fell behind once again in the 12th on an RBI single from Zack Gahagan off reliever Michael Mediavilla and could not find the tying run.

After struggling with a high pitch count through the first two innings, Bargfeldt settled down to deliver another impressive outing in front of 2,599 fans.

From the third through the sixth innings, Bargfeldt allowed just one baserunner to reach, on a fourth-inning single from Ike Freeman.

Bargfeldt cruised while retiring the side in the third, fifth and sixth innings. After recording the first out of the seventh on a groundout, the veteran southpaw was lifted after issuing a walk to Tar Heels pinch hitter Brandon Matorano.

North Carolina jumped out to a 2-0 lead on a two-RBI single from Dallas Tessar off Bargfeldt in the second inning.

The Hurricanes tied the game an inning later, jumpstarted by a single from senior Hunter Tackett and a ground-rule double from freshman Raymond Gil.

With two runners in scoring position and one out, North Carolina starter Tyler Baum threw a ball that bounced to the backstop to score Tackett and cut the deficit to 2-1.

An RBI infield single from freshman Freddy Zamora with the infield drawn in was hard enough to score Gil and tie the game, 2-2.

Miami took its first lead of the game in the sixth on an RBI single from Tackett lifted to left. Junior Romy Gonzalez, who walked, stole second and advanced to third on a wild pitch, put Miami ahead, 3-2 and prompt a Carolina pitching change.

An RBI single from pinch hitter Clemente Inclan off Miami reliever Cooper Hammond tied the game, 3-3, in the seventh.

North Carolina threatened to regain the lead in the eighth when they loaded the bases on a hit batter, an infield single and a walk.

But ace reliever Frankie Bartow induced a groundout to third from pinch hitter Ben Casparius, and Gonzalez threw home to catcher Isaac Quinones for a forceout at the plate.

A sharp groundout by Josh Ladowski was handled by Gil at first for the final out, keeping the score locked at 3-3.

After going ahead 5-4 early in the 12th, the Tar Heels added three more insurance runs to secure their victory.

The Hurricanes and Tar Heels return to Mark Light Field Saturday for Game 2 of the weekend series. First pitch for the contest slated for broadcast on ACC Network Extra and WVUM 90.5 FM, is set for 7 p.m.