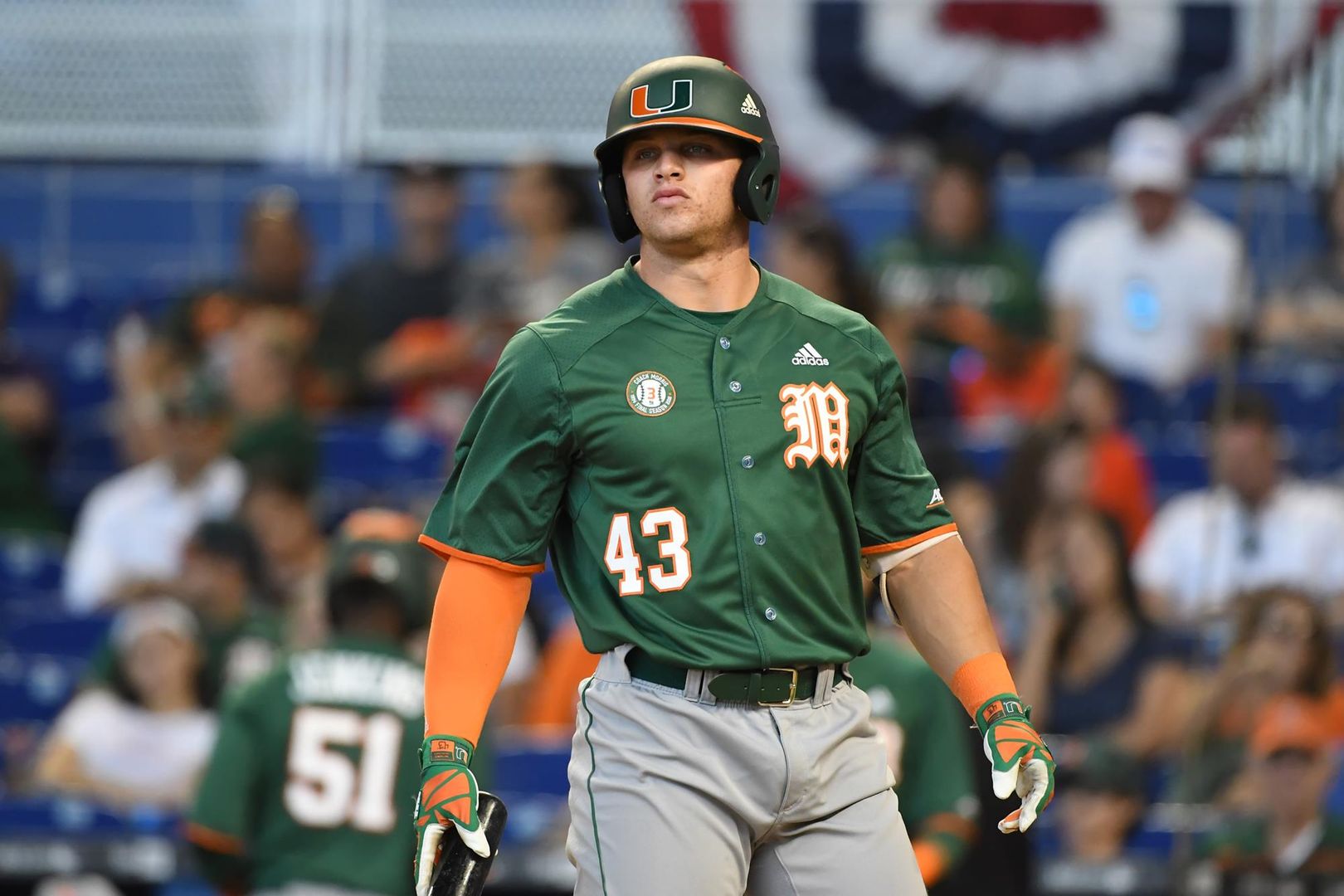 Miami fell victim to a four-run third inning to face an early deficit, as the host Yellow Jackets captured Game 2 of a weekend ACC series.

The Hurricanes will look to salvage the series Sunday at 1 p.m. with junior Andrew Cabezas on the hill.

Head coach Jim Morris, who spent 12 seasons as head coach at Georgia Tech prior to joining the Hurricanes, was honored during pregame ceremonies with a commemorative bat presented by Yellow Jackets head coach Danny Hall.

But his team’s bats could not solve Georgia Tech lefthander Connor Thomas until Rivera – who entered in the previous half-inning as a defensive replacement – cracked a one-out pitch well over the left field wall in the seventh.

Rivera became the second Hurricane to record a home run for his first collegiate hit this season; fellow freshman Alex Toral did it opening weekend against Rutgers in mid-February.

The Hurricanes made things interesting when freshman Isaac Quinones cracked a two-RBI double to left off reliever Jared Datoc in the eighth inning to cut the deficit to 7-4, but that was as close as they’d get.

Georgia Tech added six runs of insurance in the eighth to seal the win.

Thomas went 7.1 innings for Tech. All four runs charged to the southpaw came after the sixth inning. Thomas struck out 10 and walked one in an impressive outing.

Freshman Chris McMahon made his official Hurricanes debut to begin the sixth inning. The highly touted righthander, who missed the team’s first 25 games due to an offseason meniscus injury, threw 36 pitches over 2.1 innings.

After starting an exhibition with the Marlins Wednesday for the Hurricanes (12-14, 6-5 ACC), McMahon impressed in relief against a talented Jackets lineup.

Freshman Michael Amditis made his return to the Hurricanes after missing the last 17 games with a bone bruise. He caught all eight innings and finished 1-for-3 at the plate.

An RBI single from Joey Bart opened the scoring and Miami righthander Evan McKendry hit Tristin English with a pitch with the bases loaded to double the lead.

A two-RBI single from Wade Bailey made it 4-0 before McKendry induced an inning-ending double play.

The Jackets tagged McKendry (4-3) for a career-high nine hits and a career high-tying seven runs in the loss. Tech added a single run in the fourth and two runs in the fifth.

Freshman Willy Escala connected on a first-inning double off Thomas (3-3) to extend his hitting streak to seven games and make it 17 of the past 18 games with at least one hit.

Escala added an infield single in the seventh to record his eighth multi-hit effort of the season.

The Hurricanes and Yellow Jackets wrap up their series Sunday at Russ Chandler Stadium. First pitch for the finale, slated for broadcast on ACC Network Extra and WVUM 90.5 FM, is set for 1 p.m.