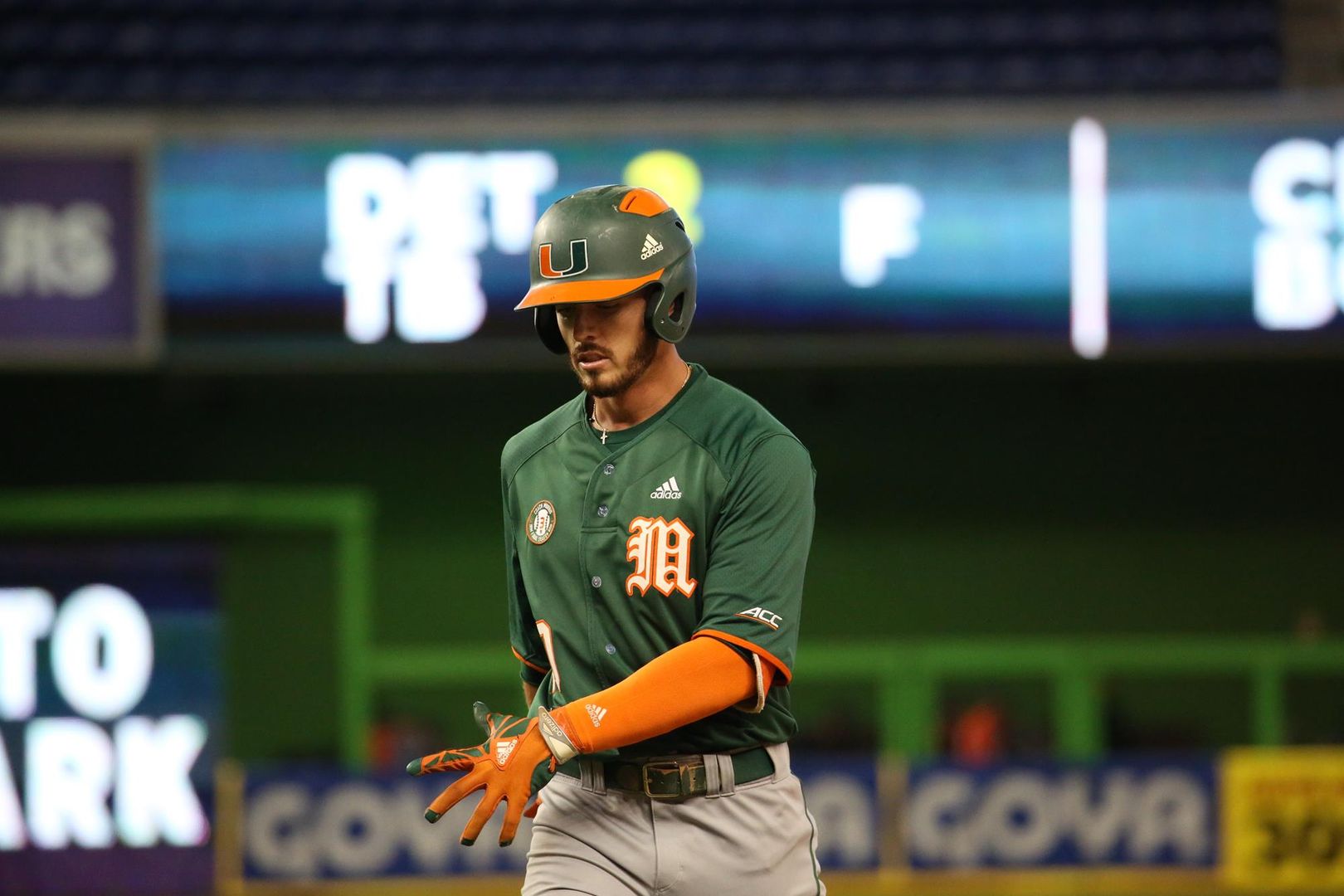 MIAMI – Every young baseball player dreams of playing in the Major Leagues.

From the moment they don their first Little League uniform, the aspirations of taking the field in the big league ballpark exist and those dreams only grow as their careers blossom.

The Miami Hurricanes received a Major League experience on Tuesday afternoon, taking on the Miami Marlins in an exhibition game at Marlins Park.

After batting practice, Marlins CEO and baseball legend Derek Jeter spoke to the Canes in their clubhouse. The future baseball hall of famer encouraged Miami’s players to always play the game hard and gave them all a lifelong memory.

“He was probably my favorite player ever,” infielder Willy Escala said. “I had like three posters of him in my room. Just to hear him talk to us and meet him was a really cool experience. I might have never gotten that opportunity if I wasn’t here.”

The big league feeling was especially impactful for Miami freshman right-hander Chris McMahon. A highly-touted recruit, McMahon made his Hurricane debut and faced off against the Marlins’ likely Opening Day lineup.

“I definitely made a mistake on that pitch,” McMahon said. “My first two pitches were not close and I was just trying to get one in there and he turned on it. They’re good hitters and that’s why he’s on a big league team. I’ve just got to make better pitches.”

The Marlins put up six runs in the opening frame, setting the tone for a 22-2 win, but Tuesday’s exhibition was filled with experiences the Hurricanes will remember forever.

“It was honestly one of the greatest experiences I’ve had,” Escala said. “Just to be on the field with them and talk to some of them was a blessing and to be able to share that with my team made it one of my favorite experiences.”

A trio of Miami natives were responsible for the Hurricanes’ only runs of the game, as Michael Perez led off the top of the third with a base hit and Escala followed with an RBI triple that landed just inside the left field line. Two batters later, Freddy Zamora drove home Escala with a sacrifice fly.

“We were just trying to do our thing,” Escala said. “We were focused on hitting the ball and staying within the game and not trying to make it too big. Things kind of rolled our way there. I was kind of iffy if the ball was going to be fair or foul, but it landed fair and I ran hard.”

While the result was not what the Hurricanes would have liked, they were able to learn a lot from facing off against Miami’s Major League Baseball team.

“It was pretty impressive to see them,” Escala said. “If you missed a pitch, they hit it pretty hard and pretty far. You could tell they were in their best shape and ready for the start of the season. That meant we needed to be at our best, too. This game gave us a good idea of where we need to be in the future if we want to be a big leaguer.”

The Hurricanes are back in action Wednesday evening at FGCU. First pitch is scheduled for 6:30 p.m. from Fort Myers, Fla.