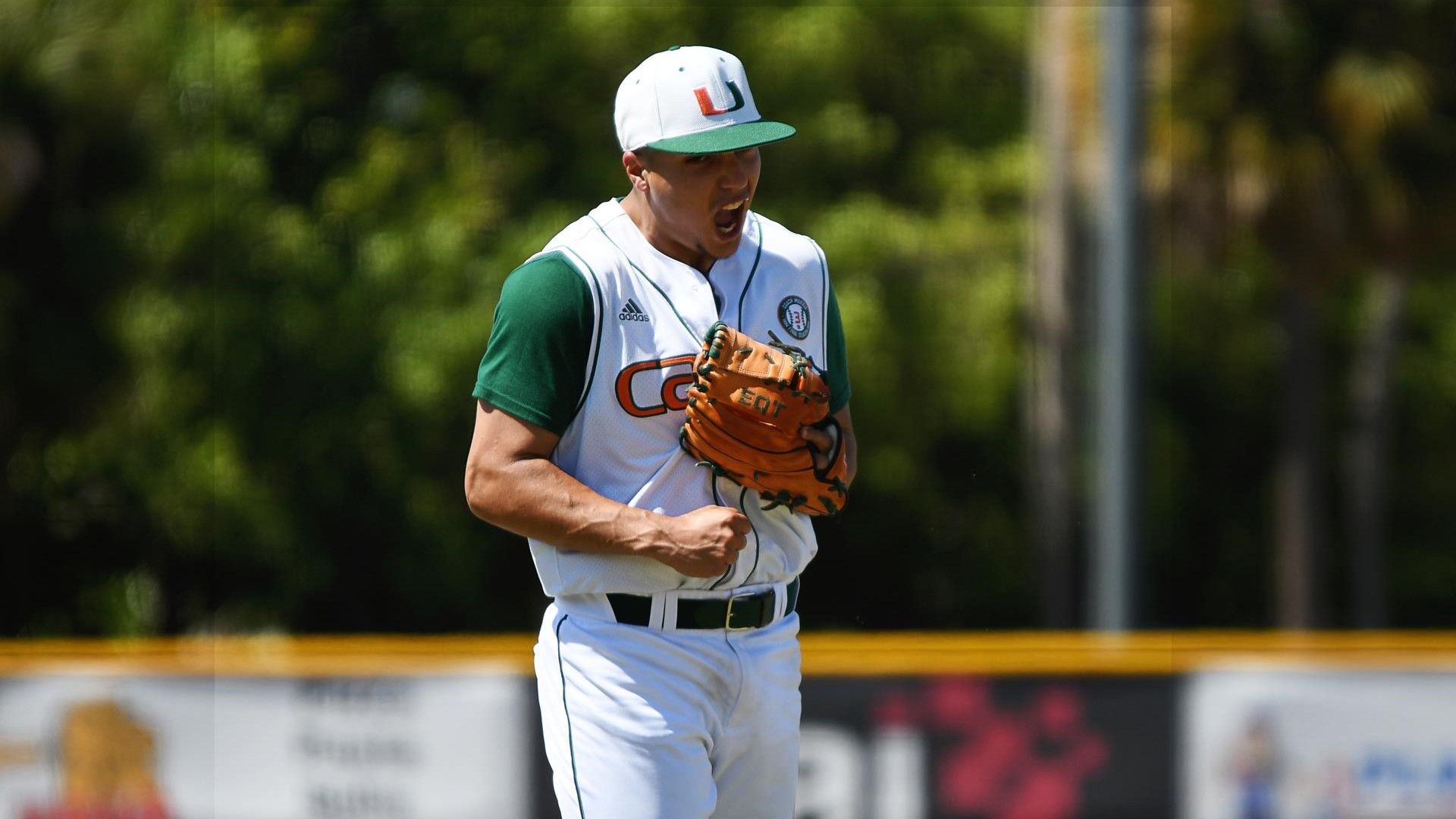 CORAL GABLES, Fla. – Junior Andrew Cabezas impressed in his second straight Sunday start, and the Hurricanes finished off their first sweep of Virginia since 2008 with an 8-1 win at Alex Rodriguez Park at Mark Light Field.

Cabezas, who was moved to the rotation prior to the team’s series at Duke last weekend, was in control from the outset against the No. 24 Cavaliers.

The fiery righthander went six innings for the second time in a week, helping clinch Miami’s first sweep of the spring and marking Virginia’s first time being swept on the road since March 2015.

Cabezas struck out a season-high eight batters. He walked two, scattered three hits and surrendered just one run in a 90-pitch effort.

While Cabezas (2-2) was sharp again , he was also the benefactor of some early offense for the second straight weekend.

“Knowing my teammates picked me up and scored those early runs, it made me a lot looser,” Cabezas said. “I was attacking the zone a lot more. It’s something I should be doing regardless but the fact that my team responded as quick as they did gives you much more confidence.”

Freshman Isaac Quinones led the charge offensive with his third straight multi-hit game (2-for-4). Seven of Miami’s nine starters had at least one hit, as the Hurricanes out-hit the Cavaliers for the third straight game.

It was Quinones who put Miami on the board in the first with a two-out, two-run double.

The Hurricanes strung three straight two-out hits off Virginia starter Bobby Nicholson (1-1) to take the lead. Singles from seniors Hunter Tackett and Michael Burns set the stage for Quinones, who drove a 1-2 pitch to left field to score both runners.

As he has done countless occasions over the past three weeks as Miami’s starting catcher, Quinones delivered in a big spot.

“It feels great,” he said. “I knew getting a two-out hit, from the start, could get us going and get the energy going. I knew we would have the right momentum.”

The hit extended a career-long hitting streak to 14 games for Quinones, who leads the Hurricanes with a .392 batting average this season.

Reliever Blake Rohn did not fare much better, issuing a walk to Dylan Cloonan and hitting Tackett with a pitch with the bases loaded to force in a run. Another miscue by Virginia – this one on an error charged to first baseman Nate Eikhoff – scored Miami’s fourth run on a groundball from Quinones.

The way Cabezas was pitching, four runs was more than enough. Much like starters Jeb Bargfeldt and Evan McKendry before him, Cabezas put on a dominant effort against a top-25 team.

In two starts this season, Cabezas has compiled a miniscule 0.75 ERA and posted a 2-0 record.

“I’ve always told Coach Morris, I’ll do whatever he needs,” Cabezas said. “But the fact that he gave me the opportunity I’ve been seeking at the University of Miami, I’m just very excited.”

Virginia cut the lead to 4-1 on a sacrifice fly in the fourth, but Cabezas allowed just one hit over his final three innings.

Miami was held in check by Virginia reliever Bennett Sousa until the eighth, when the Hurricanes plated four more runs to put the game away.

Junior Romy Gonzalez padded Miami’s lead to 5-1 in with an RBI triple off Sousa, and freshman Raymond Gil made it 7-1 with a two-RBI double off the wall in left.

Virginia made an eighth-inning pitching change, but Miami’s offense would continue its late surge on an RBI triple from freshman Freddy Zamora to left off reliever Kyle Whitten.

After Wednesday’s disappointing 11-9 loss to FAU, Cabezas said the Hurricanes proved their mettle and moved into a tie for first place in the ACC Coastal Division.

The Hurricanes next play an exhibition with the Miami Marlins on Tuesday at Marlins Park. First pitch for the exhibition, slated for broadcast on WVUM 90.5 FM and 990 AM ESPN Deportes, is set for 3:05 p.m.