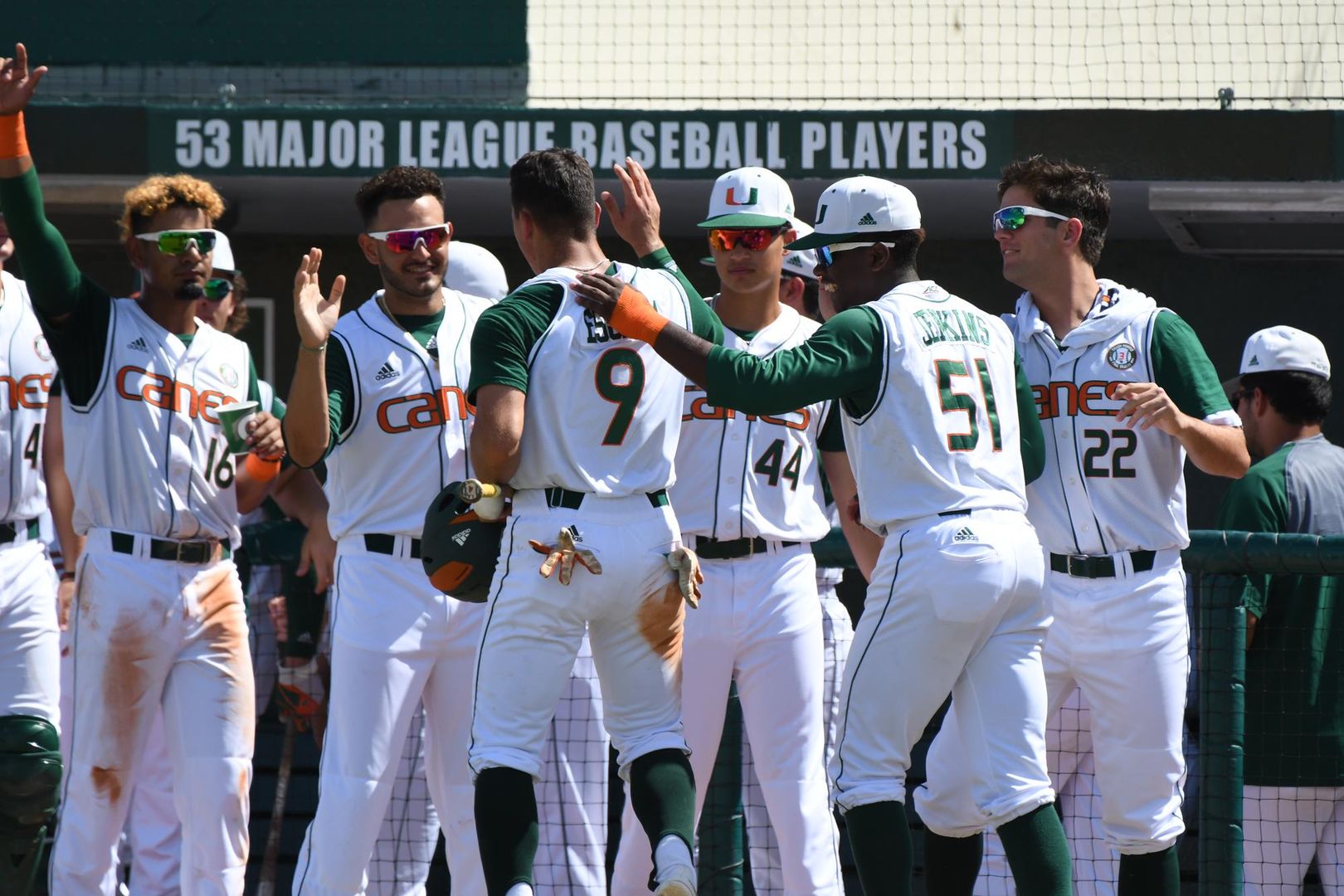 CORAL GABLES, Fla. – Sophomore Evan McKendry rebounded with a dazzling start, and No. 24 Miami handed No. 1 Florida its first loss of the season, 2-0, Sunday afternoon in the series finale at Alex Rodriguez Park at Mark Light Field.

After lasting just 3.1 innings last time out against Rutgers, McKendry (1-1) won a pitcher’s duel against Gators righthander Tyler Dyson (1-1) with the most impressive outing of his career to help Miami salvage the series.

For the second straight start, McKendry struck out eight batters. But unlike his start last Sunday, the Pembroke Pines, Fla., native worked his way out of any damage to keep the Gators off the scoreboard.

The win helped the Hurricanes avenge a 7-3 loss Friday and a 8-2 loss Saturday.

“It was really a big win for us, needless to say,” head coach Jim Morris said. “Florida has a really good club. They’re ranked number one in the country, as everyone knows. It was a tremendous challenge for us.”

“It was really nice. We came out well as a team, a lot of energy,” McKendry said. “We brought a lot of energy all weekend, but today especially. We needed to get this win to get us moving. It was nice.”

Miami out-hit Florida 7-3 on the afternoon, but senior Michael Burns provided all the offense Miami (3-4) needed on a day when McKendry was in control. Burns broke a scoreless tie in the bottom of the fifth with an RBI double and added an RBI single later in the game.

Junior Andrew Cabezas earned his second save of the season by pitching the final three innings in front of 3,388 fans.

“I think we grew as a team a lot this weekend,” Burns said. “We learned a lot all weekend. Finally getting over the hump – we were close, we were close, and then we finally got them on Sunday – moving forward, we’re going to be more intense, high confidence team.”

With freshman Willy Escala on second base after a double, Burns opened the scoring in the fifth with a double of his own down the left field line, putting Miami ahead 1-0.

Dyson had allowed just three hits prior to Burns’ double. He had eight strikeouts and issued zero walks in an impressive performance.

“He was pitching his butt off,” Burns said. “He was grinding everybody. It was nice to get one on the board.”

Two innings later, Burns chopped an opposite-field single through the right side of the Gators infield to score Freddy Zamora from second and double the Hurricanes’ lead.

Florida’s first hit off McKendry did not come until the fifth, when a miscommunication among the Miami infield on a sky-high pop-up near the pitcher’s resulted in a leadoff double.

“It was a tough play, but there’s not much you can do about that,” McKendry said. “I lost it right away in the sun. It landed directly on the pitcher’s mound, so that’s a tough play for any fielder to make.”

McKendry was unfazed, however, retiring the next three batters in order, including a swinging strikeout of Nick Horvath that ended the inning and preserved the lead.

“I definitely felt good. It took time for me to find some of my pitches, but once I got going, I felt good,” McKendry said. “My offspeed was working, my changeup felt good. Slider – I ended up finding it – felt good.”

Florida (7-1) loaded the bases on three walks in Cabezas’ first inning of relief, but the junior induced a flyout to center from Austin Langworthy to end the inning and preserve a slim lead.

Cabezas struck out the side in the ninth to seal the win, helping Miami snap a four-game losing streak.

Escala reached base three times and had the first multi-hit game of his career in the win (2-for-2).

“It was a big win for our team, to give some of our young guys confidence to move forward,” Morris said. “The big thing for me today, whether we won or lost, was for our team to understand what it takes to beat a good club and play with a good club, and we did that today.”

The Hurricanes return to the diamond Wednesday with their first road game of the year at FAU. First pitch for the contest, slated for broadcast on 790 The Ticket and WVUM 90.5 FM, is set for 6:30 PM.